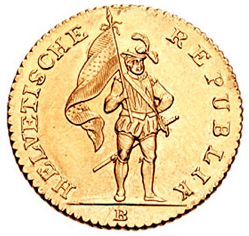 Following our Cobden Centre Radio interview last week with Thomas Jacob, and his plans to use a democratic Swiss plebiscite to re-introduce a Swiss gold franc, it is great to see that this story is beginning to grow, with an article in Marketwatch.

Switzerland, which in 2000 became one of the last countries to decouple its currency from gold, is not the only place to contemplate a change in the precious metal’s role amid controversy over government involvement in the economy. In March, Utah became the first state in the U.S. to legalize gold and silver coins as currency, while similar legislation was considered in Montana, Missouri, Colorado, Idaho and Indiana.

“I want Swiss people to have the freedom to choose a completely different currency,” said Thomas Jacob, the man behind the gold franc concept. ”Today’s monetary system is all backed by debt — all backed by nothing — and I want people to realize this.”

UPDATE: The Swiss gold franc is also discussed by Eric King and Jim Rickards at 20 minutes into this interview, broadcast on Saturday.

Nowadays, many along the political spectrum seem to agree that America increasingly has become a polarized society. Ideological and public policy discourse has been…