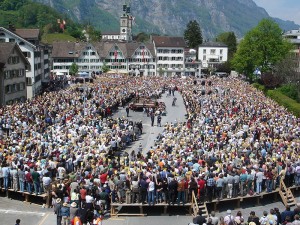 Last night I spoke to Herr Thomas Jacob, of the Property and Freedom Society, from Zurich Canton, in Switzerland. We spoke about his plans — along with Doctor Ulrich Schlüer and their action plan committee — to employ the radical democracy avenues of Switzerland to achieve a Swiss gold franc currency, parallel to the Swiss government’s current paper franc.

In this twelve minute interview we cover the background of the story, in which the action committee plans to implement constitutional change via the mechanism of a national plebiscite — this will be triggered via the collection of 100,000 signatures — and the precise framework of what the action committee proposes:

In the show we also mention a recent Jim Rickards interview on Kingworld News. You can find that interview via this link.

The campaign for a Swiss gold franc has largely been an internal Swiss affair. However, in the interview Thomas Jacob stated that his committee will shortly provide an international contact point for anyone interested in his action committee’s plans. That contact point will appear within an updated version of this Cobden Centre Radio article, when it becomes available.

In the meantime, you can find a recent article on this issue by Herr Jacob, here (in German) and an English Google tranlation of that, here.

UPDATE: There is a better English version, translated by Theodore Deden, here.