You probably didn’t know there was a Japanese Currrency Museum, did you?  Well, neither did I until I found myself stood outside it one Saturday morning.  (As you do.)  It’s run by the Bank of Japan (i.e. the central bank) and inside there are a large number of displays charting the history of Japan’s money from gold dust to today’s paper-based fiat currency.  It’s not a big museum but it’s a damn sight better that the British equivalent.

So what did I learn?  Mainly, that Japan’s monetary history is much the same as the UK’s:  for most of Japan’s history gold and silver dominated, governments were forever debasing the coinage, paper money came about at almost the same time as it did in Britain and the exchange rate between gold and silver was always causing problems.  This was especially true immediately after Japan opened up to the West.  A lucrative arbitrage trade developed in which Westerners would sell their silver to the Japanese government and receive far more gold in return than they would at home.

The only real differences with Britain are that many Japanese coins had a hole in the centre to allow them to be threaded together with string (a practice echoed in the modern 5 and 50 yen coins) and that Japanese ingots were a really cool shape. 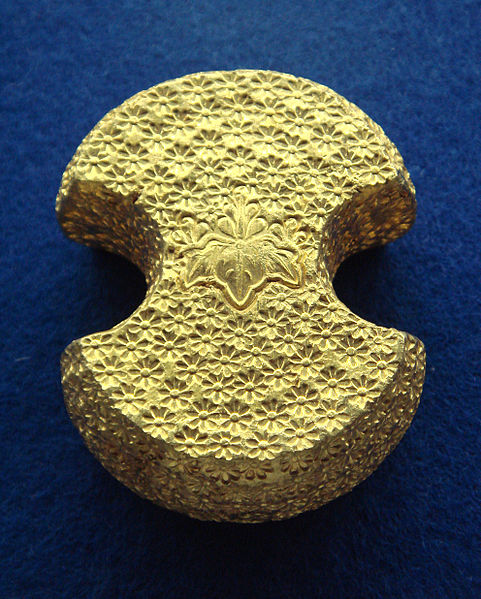 Indeed that shape is a frequently used banking emblem to this day.  The other difference is that the Japanese were quite happy to accept foreign currency, particularly Chinese currency.  Japan even had privately minted coins in much the same way Britain had, as George Selgin described in his book Good Money.

One thing I picked up (or at least I think I picked up – the English notices were limited) was to do with the collapse of the Tokugawa Shogunate.  The stock history of the birth of modern Japan goes something like this: for 200 years the Shoguns shut Japan off from the rest of the world; in 1853 the US Commodore Perry parked his ships in Tokyo Bay and demanded a trade agreement; the Shogunate resisted change and in 1868 it was abolished and the Emperor restored.  Modernisation began.

What I picked up was that well before the arrival of Perry there was a severe debasement of the currency underway.  I found this rather surprising given that Japan didn’t have any wars to fight, but they managed it anyway.  Could it be that, far from modernisation being the culprit, it was a currency collapse that did for the Shogun?

2 replies on “A trip to the Japanese Currency Museum”