“The Fed insists on saving us from ‘everyday low prices’ – they call it deflation. I submit that in a world of technological wonder, prices ought to be weakening: it costs less to buy things because it costs less to make them. This benign tendency the Fed resists at every turn. It wants the price level (as it defines it) to rise by two percent a year, plus or minus. In so doing, it creates redundant credit that finds its way into other things. These excess dollars do mischief. On Wall Street we call this mischief a bull market and we’re generally all in favour of it..

“The Fed, in substance if not in name, is [still] engaged in a massive experiment in price control. (They don’t call it that.) But they fix the Fed Funds rate, they manipulate the yield curve.. they talk up the stock market. They have their fingers and their thumbs on the scale of finance. To change the metaphor, we all live to a degree in a valuation ‘hall of mirrors’. Who knows what value is when the Fed fixes the determining interest rate at zero? So I said “experiment in price control” but there is no real suspense about how price control turns out. It turns out, invariably, badly.”

Consider the following table. It comes by way of iShares by Blackrock (not a fragrance), via Barry Ritholtz and Absolute Return Partners. It shows the recommended positioning of Wall Street’s finest with regard to bond markets and equities. (This exercise may well show that when everyone is thinking the same, nobody is really thinking at all.)

As far as the sell side was concerned, brash individualism and bold contrarianism died some time during 2013. By the start of 2014, all that remained on Wall Street was the hive mind of the Borg – a rather bland consensus that bonds were bad and equities were good. Astonishing that stockbrokers might possibly nurse such bias. So January’s primary trends (bonds rallying, and equities tanking), if sustained, may serve to remind us all that unsolicited sell side research, being to all intents and purposes free, is worth precisely what folk pay for it.

If the last investor is already loaded up to the gills on stocks, where is the greater fool to whom those stocks can then be sold? January may have given us an answer. Pimco’s Bill Gross comes to a similar conclusion in his latest investment outlook, from which the following is taken:

..be “careful.” Bull markets are either caused by or accompanied by credit expansion. With credit growth slowing due in part to lower government deficits, and QE now tapering which will slow velocity, the U.S. and other similarly credit-based economies may find that future growth is not as robust as the IMF and other model-driven forecasters might assume. Perhaps the whisper word of “deflation” at Davos these past few weeks was a reflection of that. If so, high quality bonds will continue to be well bid and risk assets may lose some lustre.

Astonishing, too, that the world’s largest bond manager might possibly nurse such bias in favour of “high quality bonds”. Especially when they’re not (high quality, that is) – there just happen to be oodles of them. But the fact remains that investors seem to have been spooked by the final arrival of Fed tapering, and those in emerging markets doubly so. But since we’re all trapped in what James Grant calls that valuation ‘hall of mirrors’, courtesy of central banks endlessly tinkering with asset prices via the most aggressive monetary stimulus in world history, it’s not remotely easy trying to foresee the outlook for either bonds, or stocks, or anything else. Rather than just abandon the field and sit disgruntled on the sidelines in cash, our response is to seek solace in the most compelling examples of deep value we can find, both in the credit market and in stocks.

Tim Lee of Pi Economics also sees evidence of a growing deflation shock. His chart below shows that a proxy for global broad money growth (a simple weighted average of money growth rates for the US, the Eurozone, the UK and Japan) peaked in 2011 and now appears to be rolling over. 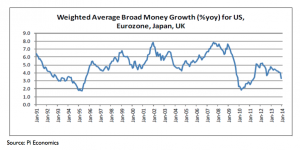 Tim now expects major equity markets to continue to decline as the crisis in the ‘Fragile Five’ economies accelerates. “At some stage the dollar will then begin to appreciate more broadly and Eurozone yield spreads will begin to blow out. Treasury yields will, of course, continue to decline.” If this comes to pass, Wall Street will have managed to get its asset allocation advice for 2014 precisely wrong on both counts. Developed equities will fall, while fixed income (notably US Treasuries) will rally further.

Macro hypothesizing is all very well, but it at least partly assumes that the hypothesizer is benchmarked and in our case, we’re not. We don’t currently have significant exposure to developed world equities since we see much more compelling value (in classic Graham & Dodd terms) in certain pockets of the Asian markets. And we currently have no exposure to US Treasuries because we can access higher real yields with objectively superior credit quality elsewhere. That is, of course, a raging anomaly, but we never said markets were entirely or even necessarily remotely rational.

We always thought that markets (in both the debt and equity spheres) were overly complacent about the risks associated with Fed tapering. Last year, for example, the Fed printed and bought $500 billion-worth of US Treasuries – and the Treasury market still went down. The idea that the Treasury market would shrug off the determined departure of its biggest buyer in 2014 always seemed nonsensical. Now, however, there is increasing reason to fear deflationary forces at work throughout most of the developed markets other than Japan, so the price dynamic for Treasuries has changed markedly. Similarly for developed world equities, where the gyrations of January indicate – to us – a market that is coming to the slow realisation that it has already stepped over the cliff edge. Unfortunately many investors, with central banks having slashed deposit rates to de minimis levels, have gone ‘all-in’ with regard to risk assets in the desperate pursuit of yield. Be careful what you wish for. It is quite clear that central banks will do literally anything within their power to attempt to avert deflation – to ensure that “it cannot happen here”. That does not mean they will succeed – but they may end up destroying fiat currencies in the process (one of the reasons we have consistently held gold).

Tim Lee believes it is “quite obvious” what the Fed will ultimately do:

They will expand their balance sheet dramatically further by doing QE in outright risk assets – junk debt, equities, etc. They will swap money for risk assets, not money for safe assets.

The problem is that this would be a very big step; a further violation of the ‘rules’ of central banking. And we have a new Fed chairman, who has only just taken office. It is likely that things will have to get very bad before that very big step can be taken.

Six years into this crisis, and in the words of Lily Tomlin, things are going to get a lot worse before they get worse. From our perspective as asset managers, it comes down to a simple mantra: continually question precisely what you own, and why you own it.