“The European Central Bank has given its strongest signal yet that it is prepared to embrace quantitative easing to prevent the euro zone from sliding into deflation or even a prolonged period of low inflation.”
– ‘Draghi strengthens QE signal’, Financial Times, April 4, 2014.

Yes, heaven protect Europe’s embattled citizens and savers from a prolonged period of low inflation. How could they possibly survive it ?

If history is any guide, probably quite well. As Chris Casey points out in his essay ‘Deflating the deflation myth’, the American economy during the 19th Century twice experienced deflationary periods of roughly 50 percent: 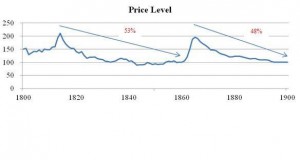 Source: McCusker, John J. “How Much Is That in Real Money?: A Historical Price Index for Use as a Deflator of Money Values in the Economy of the United States.” Proceedings of the American Antiquarian Society, Volume 101, Part 2, October 1991, pp. 297-373.

This during a period of “sustained and significant economic growth”. But just think of all those poor consumers, having to make the best of constantly falling everyday low prices.

In their research article ‘Deflation and Depression: Is There an Empirical Link?’ of January 2004, Federal Reserve economists Andrew Atkeson and Patrick Kehoe found that “..the only episode in which we find evidence of a link between deflation and depression is the Great Depression (1929-1934). We find virtually no evidence of such a link in any other period.. What is striking is that nearly 90% of the episodes with deflation did not have depression. In a broad historical context, beyond the Great Depression, the notion that deflation and depression are linked virtually disappears.”

In his 2008 essay ‘Deflation and Liberty’, Jörg Guido Hülsmann writes as follows:

“In the present crisis, the citizens of the United States [he could have added: and of the UK, and Europe] have to make an important choice. They can support a policy designed to perpetuate our current fiat money system and the sorry state of banking and of financial markets that it logically entails. Or they can support a policy designed to reintroduce a free market in money and finance. This latter policy requires the government to keep its hands off. It should not produce money, nor should it appoint a special agency to produce money. It should not force the citizens to use fiat money by imposing legal tender laws. It should not regulate banking and should not regulate the financial markets. It should not try to fix the interest rate, the prices of financial titles, or commodity prices.

“Clearly, these measures are radical by present-day standards, and they are not likely to find sufficient support. But they lack support out of ignorance and fear.

“We are told by virtually all the experts on money and finance – the central bankers and most university professors – that the crisis hit us despite the best efforts of the Fed [..and the Bank of England, and the ECB..]; that money, banking and financial markets are not meant to be free, because they end up in disarray despite the massive presence of the government as a financial agent, as a regulator, and as money producer; that our monetary system provides us with great benefits that we would be foolish not to preserve. Those same experts therefore urge us to give the government an even greater presence in the financial markets, to increase its regulatory powers, and to encourage even more money production to be used for bailouts.”

But as Hülsmann goes on to argue, all of these contentions are wrong, and have been proven to be wrong since the times of Adam Smith and David Ricardo. A paper money system is not beneficial “from an overall point of view”. (Nor has any unbacked paper money system ever lasted.) A paper money system does not create real resources on which our welfare depends. “It merely distributes the existing resources in a different manner; some people gain, others lose. It is a system that that makes banks and financial markets vulnerable, because it induces them to economize on the essential safety valves of business: cash and equity.”

The conventional view of deflation is that if it sets in, “the banking industry, the financial markets, and much of the rest of the economy will be wiped out in a bottomless deflationary spiral.” But as Hülsmann goes on to argue, such a spiral would not prove fatal to the lives and welfare of the general population. Rather, it would destroy “essentially those companies and industries that live a parasitical existence at the expense of the rest of the economy, and which owe their existence to our present money system.”

Let us be more explicit. Severe deflation threatens at an existential level bankrupt banks and the bankrupt governments that perpetuate their existence. Deflation is a mortal enemy to the heavily indebted state and its embedded parasites, but it is a friend to the saver and to anyone with a positive net worth. Because it is so dangerous to the debtor, (unelected) central bankers clearly feel they have no option but to incinerate savers at the altar of perpetuating an unsustainably indebted banking and political elite.

So it would seem that the euro zone, under Mario Draghi, is on the verge of outright quantitative easing, and that the ECB is also committed to using “unconventional instruments” in an increasingly desperate attempt to revive the corpse through explicit inflationism, not least by actually buying sovereign debt of dubious underlying value, rather than merely pledging to. The financial markets certainly appear to think so: the yields on Spanish 5-year government paper fell below those of their US equivalents last week. Spanish bonds yielded more than 7% above US paper as recently as 2012. And as Bloomberg pointed out, the yields on Spanish and Italian five year paper, and the yield on 10 year Irish government debt, all fell to record lows last Friday.

Whether in terms of goosed bond markets or inflated stock markets, inflated higher not necessarily by any improvement in corporate prospects but primarily by expectations of more ex nihilo money courtesy of the world’s major central banks, these are false markets. They cannot entirely be trusted – assuming that markets ever can. Fund manager Seth Klarman has written well on the artificiality of today’s markets:

“The Fed and the Treasury openly discuss the aims of their policies: to manipulate financial markets higher and to generate reported economic “growth” and a “wealth effect”. Inside the giant Plexiglas dome of modern capital markets, just about everyone is happy, the few doubters are mocked and jeered, bad news is increasingly ignored… The artificiality of today’s markets is pure Truman Show. According to the Wall Street Journal, the Federal Reserve purchased about 90% of all the eligible mortgage bonds issued in November.”

John Phelan of the Cobden Centre writes well that “the Federal Reserve has become an enabler of the financial havoc it was designed (a century ago) to prevent.”

Messrs Yellen, Draghi et al should be careful what they wish for. Inflation targeting is hardly a precise science. Achieving an entirely arbitrary 2% inflation level is bad enough for savers on fixed incomes when deposit rates are close enough to zero as to make no difference, but markets have a tendency to overshoot. Most government bond markets are clearly overbought – but in a QE world given fresh impetus by the looming arrival of the ECB, overbought markets can become even more overbought. When we don’t claim to understand the underlying dynamics (political) or the final destination (though we have our own fears), it’s much better simply not to play. From an asset allocation perspective, classic, benchmark-unconstrained Benjamin Graham-style ‘deep value’ equity is, we now believe, pretty much the only game in town – and that is where we now focus our attention, almost exclusively.

Meanwhile, we watch in disbelief as market distortions become even more untenable.