Last year was a tough one for investors. Gold was down 10 percent. The Dow Industrials fell 2.5 percent, and most bond indexes finished down by at least that much.

One institution that performed remarkably well in 2015 was the Federal Reserve. It just finished its most profitable year on record. The $100 billion in net income earned last year was a slight improvement over the previous year. That total was also roughly three times higher than the Fed’s income from 2007, the last year before it initiated its Quantitative Easing programs in the wake of the financial crisis.

Since the Fed does not exist to generate profits, some may be confused as to how it could have such a great year at doing so.

Here’s how it works. Every time the Fed expands the money supply it buys an asset. Typically the asset is a financial security, like a US Treasury bond, and the counterparties are typically large banks. Figure 1 gives a simplified look at the Fed’s balance sheet at the end of 2015 and how it evolved over the year: 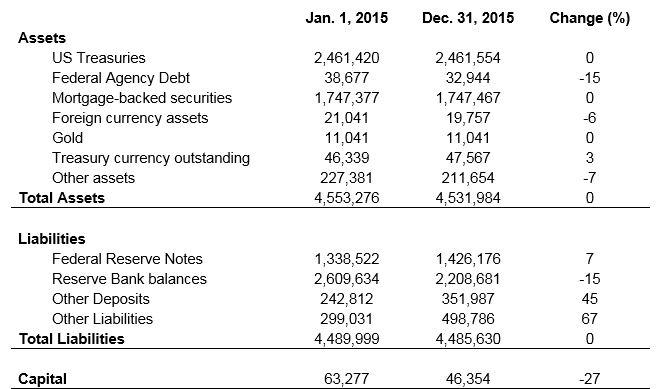 Compared to previous years, 2015 was relatively uneventful at the Fed. Having completed the tapering of its Quantitative Easing programs in October 2014, the Fed’s asset holdings held constant over the year. This was in stark contrast to the previous six years, during which the Fed purchased $3.5 trillion of assets. The Fed earns interest on its assets but most of its liabilities are non-interest bearing, like the $1.4 trillion worth of Federal Reserve notes crumpled in people’s pockets or buried under our mattresses. The Fed does pay interest on Reserve Bank balances, but at the current rate of 0.5 percent, this figure was a drop in the bucket relative to its total income. (Almost all of the Fed’s assets earn interest, while it incurs an interest expense on less than half of its liabilities.

What Does the Fed Do With All That Income?

The question that arises is what the Fed does with its profits.

Each year, the Fed remits to the US Treasury its net income, and thus provides the federal government with an important source of funding. Figure 2 shows how this figure has evolved since 2001. 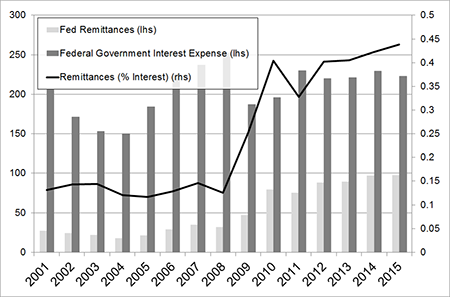 Figure 2: Treasury Interest and Fed Remittances (in billions of dollars)

A decade ago, back when the Fed was a smaller size, Fed remittances were fairly steady, in the neighborhood of $20 billion a year. This all changed after 2008 as the Fed’s Quantitative Easing programs increased the amount of interest-earning assets that would generate funds to transfer back to the Treasury. This year’s figureof $97.7 billion is more than four times the amount transferred just ten years ago, an annual growth rate of more than 16 percent. (At least something is growing quickly in this economy.)

Big Bucks for the US Treasury

For the US Treasury, Fed remittances are something of a free lunch. When someone buys a Treasury bond, the government must pay them interest. This applies to the Fed as well, but then at year-end the Fed remits the interest back to the Treasury.

The federal government paid out $223 billion in interest payments last year. The Fed remitted almost $100 billion back, leaving the net interest expense at around $125 billion. It’s not just historically low interest rates that are making it easier for the Treasury to borrow in a way that, if it were done by anyone else, would classify them as subprime. The Fed is also chipping in and helping out where it can.

Also shown in figure 2 is the percentage of the federal interest expense that is remitted back by the Fed. For 2015, this figure neared 45 percent. That figure is a good way to think about the free lunch that the Fed gives to the Treasury.

In more “normal” times (i.e., prior to 2008) around 10 to 15 percent of the Treasury’s interest payments were paid back to it by the Fed. This figure has grown to almost four times that amount over the past seven years and it doesn’t look likr this trend will abate anytime soon.

As much as economists talk about the independence that the Fed holds from Congress, these remittances represent a strong link. In fact, since they enable federal spending they create a form of quasi-fiscal policy for the Fed to use, in addition to its more common monetary policy options.

Consider that since Treasury debt is almost never repaid in net terms (old issues are retired but replaced with new debt issuances), the true cost of financing the US government’s borrowing is not the gross amount of debt outstanding but the annual interest expense it faces. Viewed this way, nearly half of the Treasury’s borrowing was financed by the Fed last year. Absent these Fed remittances, Congress would need to look at either an alternative funding source (though I am not sure how many takers there are for the Fed’s $2.5 trillion Treasury holdings) or make some serious cuts.

How serious? NASA’s operating budget was roughly $18 billion last year, so a lack of Fed remittances would cause the Treasury to cut around five NASA-sized programs. Alternatively, the governments Supplemental Nutrition Assistance Program (previously known as “food stamps”) cost $70 billion in 2014. Without the Fed’s remittances, Congress would have to stop paying out all food stamp recipients plus it would be forced to defund almost two NASAs.

For those concerned with the bludgeoning size of the federal government, putting a stop to Fed remittances would put a serious debt in public finances and force some serious thought as to what programs need to be cut.

Written By
David Howden
More from David Howden
We recently looked at the Federal Reserve’s 2012 results. In particular, we pointed to...
Read More