After closing at 3.03% in December 2013 the yield on the 10-year US T-Note has been trending down, closing at 2.34% by August this year. Many commentators are puzzled by this given the optimistic forecasts for economic activity by Fed policy makers. 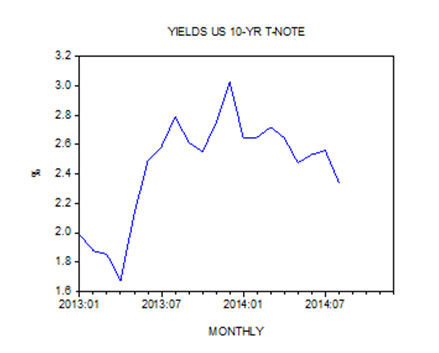 According to mainstream thinking the Central Bank is the key factor in determining interest rates. By setting short-term interest rates the Central Bank, it is argued, through expectations about the future course of its interest rate policy influences the entire interest rate structure.
Following the expectations theory (ET), which is popular with most mainstream economists, the long-term rate is an average of the current and expected short-term interest rates. If today’s one-year rate is 4% and next year’s one-year rate is expected to be 5%, the two-year rate today should be (4%+5%)/2 = 4.5%.
Note that interest rates in this way of thinking is set by the Central Bank whilst individuals in all this have almost nothing to do and just form mechanically expectations about the future policy of the Central Bank. (Individuals here are passively responding to the possible policy of the Central Bank).
Based on the ET and following the optimistic view of Fed’s policy makers on the economy some commentators hold that the market is wrong and long-term rates should actually follow an up-trend and not a down-trend.
According to a study by researchers at the Federal Reserve Bank of San Francisco (FRBSF Economic Letter – Assessing Expectations of Monetary Policy, 8 of September 2014) market players are wrongly interpreting the intentions of Fed policy makers. Market players have been underestimating the likelihood of the Fed tightening its interest rate stance much sooner than is commonly accepted given Fed officials’ optimistic view on economic activity.
It is held that a disconnect between public expectations and the expectations of central bank policy makers presents a challenge for Fed monetary policy as far as the prevention of disruptive side effects on the economy is concerned on account of a future tightening in the interest rate stance of the Fed.
We suggest that what matters for the determination of interest rates are individuals’ time preferences, which are manifested through the interaction of the supply and the demand for money and not expectations regarding short-term interest rates. Here is why.
The essence of interest rate determination
Following the writings of Carl Menger and Ludwig von Mises we suggest that the driving force of interest rate determination is individual’s time preferences and not the Central Bank.
As a rule people assign a higher valuation to present goods versus future goods. This means that present goods are valued at a premium to future goods.

That which is abandoned is called the price paid for the attainment of the end sought. The value of the price paid is called cost. Costs are equal to the value attached to the satisfaction which one must forego in order to attain the end aimed at.

According to Carl Menger:

To the extent that the maintenance of our lives depends on the satisfaction of our needs, guaranteeing the satisfaction of earlier needs must necessarily precede attention to later ones. And even where not our lives but merely our continuing well-being (above all our health) is dependent on command of a quantity of goods, the attainment of well-being in a nearer period is, as a rule, a prerequisite of well being in a later period……..All experience teaches that a present enjoyment or one in the near future usually appears more important to men than one of equal intensity at a more remote time in the future

Likewise according to Mises,

Satisfaction of a want in the nearer future is, other things being equal, preferred to that in the farther distant future. Present goods are more valuable than future goods.

Hence according to Mises,

For instance, an individual who has just enough resources to keep him alive is unlikely to lend or invest his paltry means.
The cost of lending, or investing, to him is likely to be very high – it might even cost him his life if he were to consider lending part of his means. So under this condition he is unlikely to lend, or invest even if offered a very high interest rate.
Once his wealth starts to expand the cost of lending, or investing, starts to diminish. Allocating some of his wealth towards lending or investment is going to undermine to a lesser extent our individual’s life and well being at present.
From this we can infer, all other things being equal, that anything that leads to an expansion in the real wealth of individuals gives rise to a decline in the interest rate i.e. the lowering of the premium of present goods versus future goods.
Conversely factors that undermine real wealth expansion lead to a higher rate of interest rate.

Time preference and supply demand for money
In the money economy individuals’ time preferences are realized through the supply and the demand for money.
The lowering of time preferences, i.e. lowering the premium of present goods versus future goods, on account of real wealth expansion, will become manifest in a greater eagerness to lend and invest money and thus lowering of the demand for money.
This means that for a given stock of money there will be now a monetary surplus.
To get rid of this monetary surplus people start buying various assets and in the process raise asset prices and lower their yields, all other things being equal.
Hence, the increase in the pool of real wealth will be associated with a lowering in the interest rate structure.
The converse will take place with a fall in real wealth. People will be less eager to lend and invest thus raising their demand for money relative to the previous situation.
This for a given money supply reduces monetary liquidity – a decline in monetary surplus. Consequently, all other things being equal this lowers the demand for assets and thus lowers their prices and raises their yields.
What will happen to interest rates as a result of an increase in money supply? An increase in the supply of money, all other things being equal, means that those individuals whose money stock has increased are now much wealthier.
Hence this sets in motion a greater willingness to invest and lend money.
The increase in lending and investment means the lowering of the demand for money by the lender and by the investor.
Consequently, an increase in the supply of money coupled with a fall in the demand for money leads to a monetary surplus, which in turn bids the prices of assets higher and lowers their yields.
As time goes by the rise in price inflation on account of the increase in money supply starts to undermine the well being of individuals and this leads to a general rise in time preferences.
This lowers individuals’ tendency for investments and lending i.e. raises the demand for money and works to lower the monetary surplus – this puts an upward pressure on interest rates.
We can thus conclude that a general increase in price inflation on account of an increase in money supply and a consequent fall in real wealth is a factor that sets in motion a general rise in interest rates whilst a general fall in price inflation in response to a fall in money supply and a rise in real wealth sets in motion a general fall in interest rates.

Summary and conclusions
Since December 2013 the yields on long-term US Treasuries have been trending down. Many commentators are puzzled by this given the optimistic forecasts for economic activity by Fed policy makers. Consequently, some experts have suggested that market players have been underestimating the likelihood of the Fed tightening its interest rate stance much sooner than is commonly accepted. We hold that regardless of expectations what ultimately matters for the long-term interest rate determination are individuals’ time preferences, which is manifested through the interaction of the supply and the demand for money. We suggest that an up-trend in the yearly rate of growth of our monetary measure AMS since October 2013 has been instrumental in the increase in the monetary surplus. This in turn was the key factor in setting the decline in trend in long-term interest rates.

0 replies on “Market expectations and long-term US interest rates”