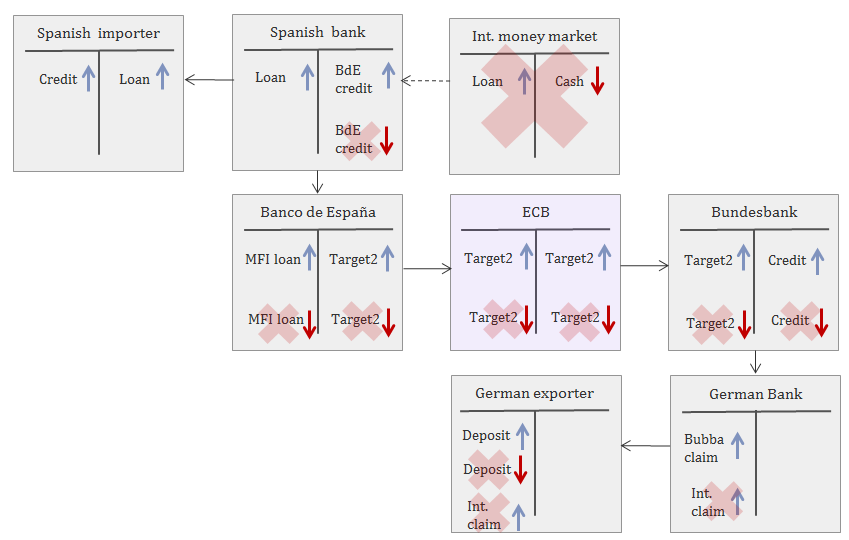 Today we present the Target2-system and the fiscal bail-out facilities in our series on European efforts to bail out itself. For new readers, check out part 1 here http://bawerk.net/?p=123

In order to facilitate cross-border financial transactions within the currency union an interbank payment system was constructed with the various national central banks as intermediaries.

A Spanish construction company, say, needs a new crane and buy one from one of the major German crane manufactures. We can assume the construction company got a loan from one of the rapidly expanding Spanish banks which can be used to buy German goods. The bank on the other hand cannot fund itself in international money markets and domestic savings cannot keep up with credit demand. However, they can issue a commercial paper which can be used as collateral for a loan with the Banco de España. The transaction is thus helped by the “temporary” credit line provided by Banco de España as part of the Target2 system.  As an offset to the monetary financial institution (MFI) loan on the Banco de España balance sheet we find a Target2 liability.

The European Central Bank (ECB) is obviously balanced as the Banco de España liability is perfectly matched by a Bundesbank Target2 asset.

This is how a Target2 imbalance is accumulated. However, in “normal” times the German exporter would save his money or invest directly in international claims. Somehow, the capital would find its way back through the chain cancelling the previous Target2 transaction. 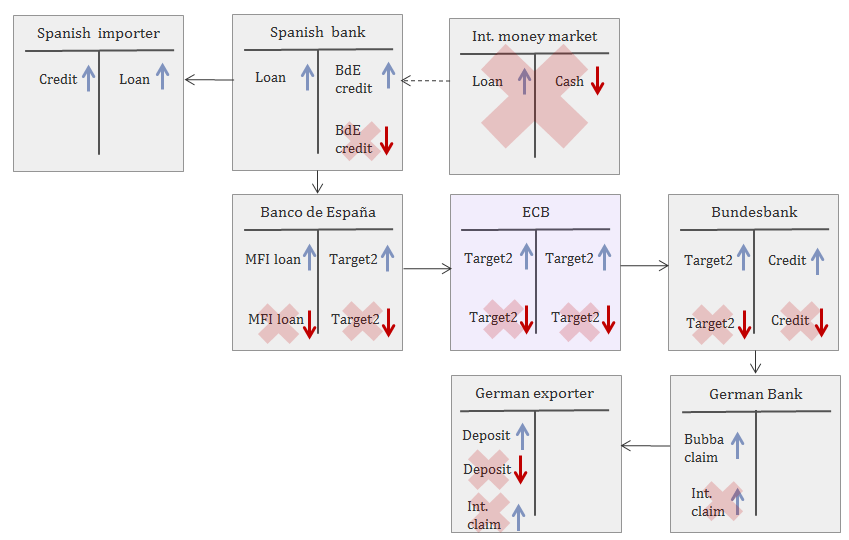 A long story short, the Target2 system made possible a massive unfunded capital transfer from the north to the south. The unsustainable capital consumption in the south and the pretense of saving in the north were allowed to reach unimaginable proportions.

We have looked through every one of the seventeen NCBs in order to see just how big this unintended bail-out was at the height of the crisis. 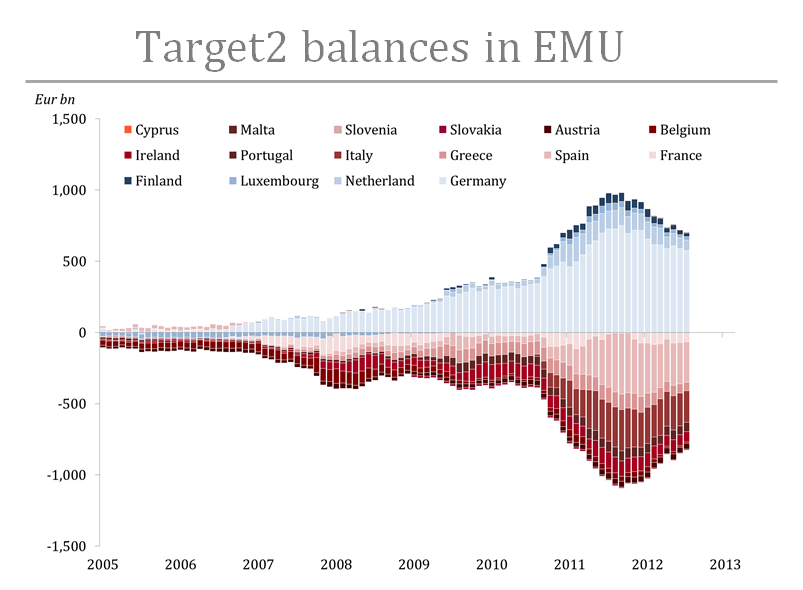 As we can see from the chart, this bail-out facility reached €1 trillion at the peak. And it is still, despite all the effort made to make this work, at €700 billion.

Specifically, the OMT with its inherent free put option, lured investors to move capital southwards again this cancelling some of the outstanding Target2 claims. Nonetheless, the reversal seem to have stabilized around the €700bn mark.

When it became obvious that Greece could not meet its obligations a bilateral loan facility was promptly created in the naïve belief that €80bn would suffice to get Greece back on track. While the facility was bilateral with no risk-sharing of other countries liabilities, it was administered by the European Commission. The International Monetary Fund was also engaged with both money and expertise.

However, as €73bn had been disbursed it was clear Greece needed more money than the pledged €80bn. It was also clear that other weak nations would be dragged down if they were to cough up money to Greece. Something had to be done.

In order to sever the precarious link between weak nations bailing out other weak nations, Eurocrats learnt from the sub-prime crisis and engaged in some financial engineering of their own.

A new temporary mechanism called the European Financial Stability Facility (EFSF) was created with an initial capacity of €440bn. Note the whole sum is callable capital from the EZ members states. No capital was paid in.

In order to create a semblance of robustness, the EFSF was combined with the European Financial Stabilization Mechanism (EFSM) which could raise up to €60bn using the EU budget as collateral.

The EFSF issue bonds with its backing from EZ members and lend the proceeds to the countries in need of help.

The EFSF is now superseded by the European Stability Mechanism (ESM), but its disbursed €188bn will run alongside ESM capacity until the last disbursement is repaid in 2048. 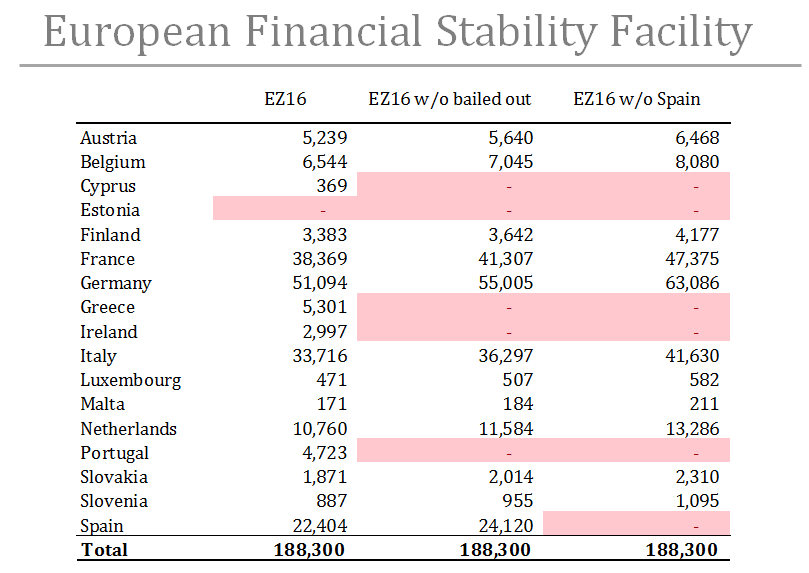 * Estonia never signed up for the EFSF as they joined the monetary union in January 2011.

Two problems presented itself with the introduction of the EFSF. First of all, existing bond holders became subordinated and would face larger hair-cuts in case of write-downs.

For example, as the EFSF was introduced Belgium`s share of the pledged €188bn was €6.5bn, but as more countries needed a bail-out, Belgium`s share rose 23 per cent to over €8bn!

This had the potential to create a domino effect, in which the EFSF would topple one nation after the other.

A permanent facility was established in September 2012 to take over the obligations from the EFSF. The new stability mechanism has paid in capital of €80bn. Allegedly ALL member states have paid in their share. We contacted the ESM and they could confirm that every euro area nations paid in their allocated share. Of course, this is a blatant lie!

The ESM works just as the EFSF, issuing bonds by leveraging up on the credit worthiness of member countries. However, in addition to actually paid in capital, it`s callable capital exceeds its lending capacity by €200bn in order to secure a triple-A rating. In other words, the ESM can call on member states to pay in a total of €700bn at any given time. Just as a side note, the European Investment Bank (EIB) can also call on its members to pay in €220bn whenever they should need to.

The €500bn lending capacity includes outstanding EFSF liabilities, but it has been proposed to add the EFSF to the overall ESM capacity. We show the total contingent liability per country under “Incl. EFSF” in the table below to see the potential liability every euro member may end up with.

According to Article 10 of the ESM Treaty, the lending capacity shall be subject to review and if the Board of Directors so chooses, ESM members must comply with the revised callable capital structure. Stated differently, the callable capital may change at any time the Board sees fit. 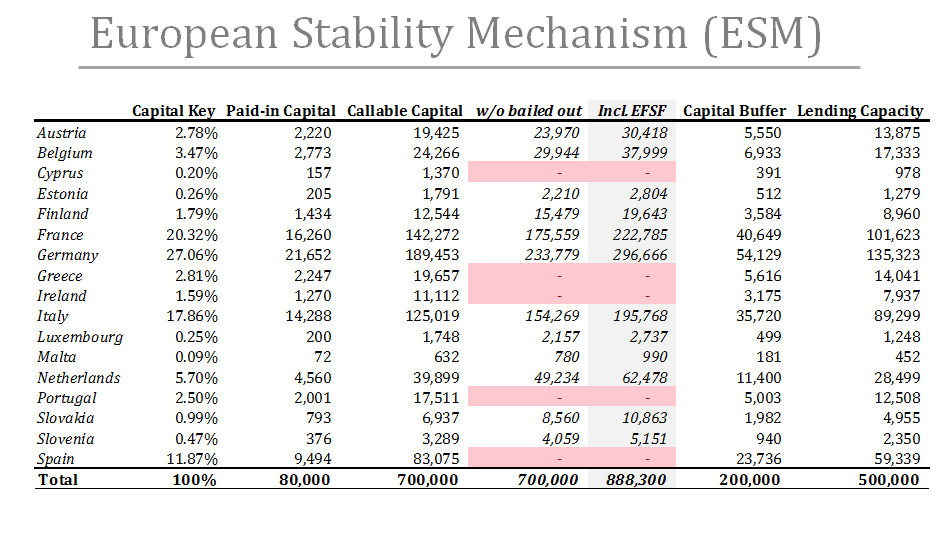 The ESM works in several dimensions:

If a nation with significant financing needs have been shut out of markets or if markets deem risk to be high and hence interest rates are high, a country can ask the ESM for a direct loan. This is the most comprehensive ESM bail-out.

For the recipient country to get the money a memorandum of understanding must be signed detailing the adjustment program seen necessary to get the nation back on a sound footing.

Money will be paid out in tranches and the tranches itself may consist of several disbursements. Every disbursement is conditional on progress outlined in the MoU.

The purpose of these credit lines it to make sure a country will not lose market access and thereby providing enough comfort for private investors to continue fund the nation. It is sort of an OMT program.

A country can request a PCCL/ECCL for one year. It may be extended for two more six-month periods.

Please observe; the OMT is not necessarily tied to a full blown ESM adjustment program, but to the more lenient PCCL. In other words, a country can ask for a PCCL, sign a MoU with far less conditions attached and get access to the OMT.

The ESM can also buy bonds directly in the secondary market in order to manipulate bond yields. A SMSF is open to both a country under a full macroeconomic adjustment program and a country under a conditional program as outlined in the PCCL/ECCL.

Finally, the ESM may provide a loan to for the specific purpose of recapitalizing financial institutions. It is worth noting that it is a loan from the ESM which elevates the fiscal burden or contingent liabilities on the nation in question.  The ESM is not the first line of defense in case of write downs, but the nation that requested the loan for recapitalization in the first place.

The ESM will not provide a loan if banks have not tried to tap private market for capital first. ESM loan will be senior to all other capital, thus the problem of subordination re-emerges also in the banking sector.

All newly issued bonds in the euro area will come with collective action clauses from now on.

When the ECB bought Greek bonds during the SMP program they were bought at a heavy discount. As the bonds came due the ECB could book “profits”. It was later agreed that the “profit” would be transferred back to the Greek ministry of finance.

However, due to the fact that the ECB cannot engage in fiscal policy, the “profits” were sent back to the owners of the ECB according to their share of the capital stock.

The owners are obviously the 17 different states that comprises the EMU and after receiving the profits, they sent it all back to Greece.

Yes, it is that bizarre.

Some of the money Greece received was used to buy back debt in the market at a discount in order to reduce the nominal value of outstanding stock.

Debt buy-backs have a tendency to increase the market value of outstanding stock and net-netthey usually do not provide long-term debt relief.

3.3.9. PSI will be sought in exceptional cases

In the preamble for the Treaty of the ESM it states that a proportionate private sector involvement shall be sought in exceptional cases. While it does not state what exceptional means we know from experience that the situation in Greece must have been regarded exceptional as they forced a “voluntarily” PSI in the winter of 2012.

As stated several times, the introduction of official rescue packages lead to subordination of private investor claims. After the Greek PSI (which incidentally broke the back of Cypriot banks) most of the debt owed by the Greek government is held by official sources.

But what is striking about the Greek situation is that despite all that has been done, debt levels are still on the rise; especially when compared to the collapsing GDC-number.

So, adding debt to “save” an indebted country from its debt did is not working as our Eurocrats intended. Further debt write downs will be necessary at some point, but this time it will be bilateral loans, EFSF and ESM debt holdings that will be affected.

This in turn will feed right back to other weak nations and contingent liabilities become very real liabilities. From PSI to official sector involvement (OSI) are certain.

The inherent flaw in the ESM becomes visible and were it not for the put provided by the OMT the whole ESM would fail miserably in its mission to maintain financial stability in the Euro Area.

ESM support for one nation potentially increases the burden on the remaining nations as every ESM signatory “irrevocably and unconditionally undertake to provide” the callable capital upon notice from the ESM board. They will have seven days to comply.

Some would point to the ESM treaty Article 8 (5) which states that “the liability of each ESM member shall be limited, in all circumstances, to its portion of the authorized capital stock” and claim there is no reason to fear contagion.

To them, we say look again. Article 8 (5) says “to its portion” and its portion may change in accordance with Article 25(2).

“If an ESM member fails to meet the required payment under a capital call made pursuant to Article 9(2) or (3), a revised increased capital call shall be made to all ESM Members with a view to ensuring that the ESM receives the total amount of paid-in capital needed”

If a nation fails, the burden on the rest increases as the ESM will always have full access to its callable capital.

Once again we see what lengths the European elite is prepared to go in order to maintain their crumbling pet-project. With no regard for the welfare of population and with minimal democratic legitimacy they come with one idiotic scheme after another; all of them with unintended consequences.

Only time will show the destructiveness of all this.