The US Federal Reserve is playing with the idea of raising interest rates, possibly as early as September this year. After a six-year period of virtually zero interest rates, a ramping up of borrowing costs will certainly have tremendous consequences. It will be like taking away the punch bowl on which all the party fun rests.

The current situation has, of course, a history to it. Around the middle of the 1990s, the Fed’s easy monetary policy — that of Chairman Alan Greenspan — ushered in the “New Economy” boom. Generous credit and money expansion resulted in a pumping up of asset prices, in particular stock prices and their valuations. 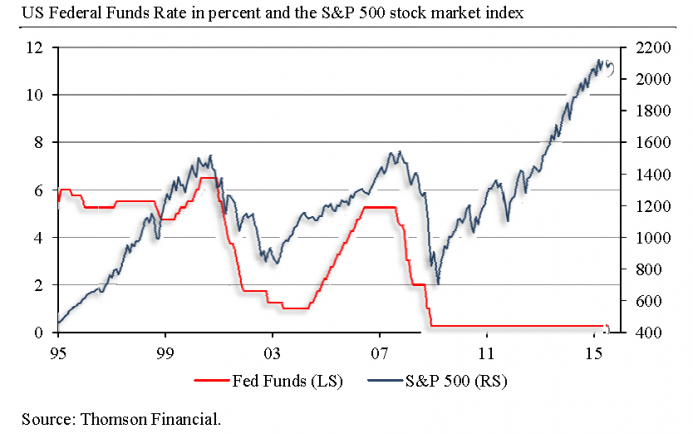 When this boom-bubble burst, the Fed slashed rates from 6.5 percent in January 2001 to 1 percent in June 2003. It held borrowing costs at this level until June 2004. This easy Fed policy not only halted the slowdown in bank credit and money expansion, it sowed the seeds for an unprecedented credit boom which took off as early as the middle of 2002.

When the Fed had put on the brakes by having pushed rates back up to 5.25 percent in June 2006, the credit boom was pretty much doomed. The ensuing bust grew into the most severe financial and economic meltdown seen since the late 1920s and early 1930s. It affected not only in the US, but the world economy on a grand scale.

Thanks to Austrian-school insights, we can know the real sourceof all this trouble. The root cause is central banks’ producing fake money out of thin air. This induces, and necessarily so, a recurrence of boom and bust, bringing great misery for many people and businesses and eventually ruining the monetary and economic system.

Central banks — in cooperation with commercial banks — create additional money through credit expansion, thereby artificially lowering the market interest rates to below the level that would prevail if there was no credit and money expansion “out of thin air.”

Such a boom will end in a bust if and when credit and money expansion dries up and interest rates go up. In For A New Liberty (1973), Murray N. Rothbard put this insight succinctly:

Like the repeated doping of a horse, the boom is kept on its way and ahead of its inevitable comeuppance by repeated and accelerating doses of the stimulant of bank credit. It is only when bank credit expansion must finally stop or sharply slow down, either because the banks are getting shaky or because the public is getting restive at the continuing inflation, that retribution finally catches up with the boom. As soon as credit expansion stops, the piper must be paid, and the inevitable readjustments must liquidate the unsound over-investments of the boom and redirect the economy more toward consumer goods production. And, of course, the longer the boom is kept going, the greater the malinvestments that must be liquidated, and the more harrowing the readjustments that must be made.

To keep the credit induced boom going, more credit and more money, provided at ever lower interest rates, are required. Somehow central bankers around the world seem to know this economic insight, as their policies have been desperately trying to encourage additional bank lending and money creation.

Why then do the decision makers at the Fed want to increase rates? Perhaps some think that a policy of de facto zero rates is no longer warranted, as the US economy is showing signs of returning to positive and sustainable growth, which the official statistics seem to suggest.

Others might fear that credit market investors will jump ship once they convince themselves that US interest rates will stay at rock bottom forever. Such an expectation could deal a heavy, if not deadly, blow to credit markets, making the unbacked paper money system come crashing down.

In any case, if Fed members follow up their words with deeds, they might soon learn that the ghosts they have been calling will indeed appear — and possibly won’t go away. For instance, higher US rates will suck in capital from around the word, pulling the rug out from under many emerging and developed markets.

What is more, credit and liquidity conditions around the world will tighten, giving credit-hungry governments, corporate banks, and consumers a painful awakening after having been surfing the wave of easy credit for quite some time.

China, which devalued the renminbi exchange rate against the US dollar by a total of 3.5 percent on August 11 and 12, seems to have sent the message that it doesn’t want to follow the Fed’s policy — and has by its devaluation made the Fed’s hiking plan appear as an extravagant undertaking.

A normalization of interest rates, after years of excessively low interest rates, is not possible without a likely crash in production and employment. If the Fed goes ahead with its plan to raise rates, times will get tough in the world’s economic and financial system.

To be on the safe side: It would be the right thing to do. The sooner the artificial boom comes to an end, the sooner the recession-depression sets in, which is the inevitable process of adjusting the economy and allowing an economically sound recovery to begin.

Dear Governor Carney,   I thank your colleagues and yourself for taking the time to meet me on my visit to the Bank earlier…