The phrase “rules-based monetary policy” has frequented conservative circles a lot lately. Republican presidential candidate Ted Cruz expressed his deep passion for implementing a monetary policy rule in a handful of presidential debates this year, including both October’s and November’s debates. House Republicans have introduced bills that would require the Federal Reserve to follow a “rule.” Even the conservative intellectual class has waved its flag of approval for these efforts. In February, the Heritage Foundation remarked that a monetary policy rule will “greatly improve transparency and predictability,” a conviction echoed loudly and frequently at the November monetary policy conference hosted by the Cato Institute.

The philosophical reasoning of the Taylor Rule goes as follows: At its best, the Federal Reserve kick-starts the economy with low interest rates, creating maximum employment and growth. At its worst, the central bank stimulates too much economic activity, generating excessive demand, malinvestment, and unemployment.

The objective of the Taylor Rule is to keep the Fed at its best by indicating precisely when it can and cannot heat up its monetary printing press. Under this particular mandate, the federal funds rate is set equal to 1.5 times the rate of inflation plus half of the output gap (the supposed difference between what the economy produced and what it should have produced) plus 1.

Though the guiding principles of the Taylor Rule may sound rather prudent in theory, they are far from simple in practice. In fact, it is nearly impossible to accurately compute the two pieces of economic data — inflation and potential output — that this formula is dependent upon.

Measuring Inflation Isn’t Easy
First, as Ludwig von Mises said in Human Action, all inflation indices “are at best rather crude and inaccurate illustrations of changes which have occurred.” One only needs to look at how often the Fed’s preferred inflation indices are revised to understand how inaccurate they are at determining increases in the average American’s cost of living. For example, fifteen years ago, the Consumer Price Index (CPI) calculated inflation to be about 3 percent higher per year than it does today. This chart demonstrates the stunning differences in measurement from then to now: 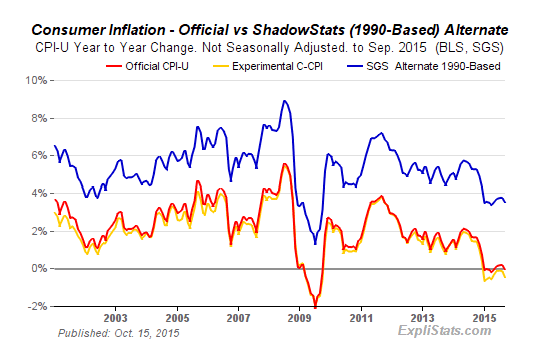 Shortly after these revisions to CPI were made, Fed Chairman Alan Greenspan decided that it was time to change the Fed’s preferred inflation index from CPI to Personal Consumption Expenditure (PCE), an index that understates the inflation rate to an even further degree. Even today, inflation indices are still continuously being modified, with the most recent changes to CPI coming just several months ago. These frequent changes signify just how dangerous it is to rely on the inflation rate when determining monetary policy.

It is also important to remember that inflating the money supply involves stealing from the poor to further enrich the affluent. John Maynard Keynes admitted this in The Economics of Consequence and Peace, when he said that inflation allows the government to “confiscate, secretly and unobserved, an important part of the wealth of their citizens … impoverish[ing] many, [but] actually enrich[ing] some.” By raising the money supply and thus lowering interest rates, the country’s biggest spenders can afford to take out more loans. The newly-created money then circulates throughout the economy, bidding up prices and causing the average consumer’s cost of living to rise. And so, even if the inflation rate could somehow be accurately pinpointed, raising the money supply to satisfy the demands of the Taylor Rule would still be the equivalent of taking from Peter to pay Paul in the name of achieving “potential output.”

Measuring Potential Output Isn’t Easy Either
Unfortunately, though, potential output is merely another imprecise economic indicator that was created by self-assured econometricians. Many of today’s mainstream economists continue to dispute how it should be calculated. When a number is finally agreed upon, it is often changed several times afterward. For example, in 1976, the output gap was calculated to be 14 percent of GDP. By the 1990s, that estimate was revised down to a meager 5 percent of GDP.

Even if it was theoretically possible to calculate the so-called output gap, the number would only be representing the potential output of a struggling, manipulated economy deprived of its medication. Recessions are cured in post-bust correction periods, when workers in unproductive sectors shift to other industries. Today, for instance, there are too many people employed in the service industry and too few people employed in manufacturing. Under a free market economy, the crisis would fix itself as the excess employees in the service industry made their way to the manufacturing sector. Under the Taylor Rule, however, the structure of production is perceived to be in perfect shape. Instead of letting the labor market fix itself, the rule would further distort the market by using the Fed’s inflationary powers to generate activity in the broken system that is already in place.

Would It Even Make a Difference?
If you are still convinced that the Taylor Rule is the solution to our monetary policy woes, take a look at this chart from the Kansas City Fed, which details the actual federal funds rate in the 1990s versus what the Taylor Rule would have recommended: 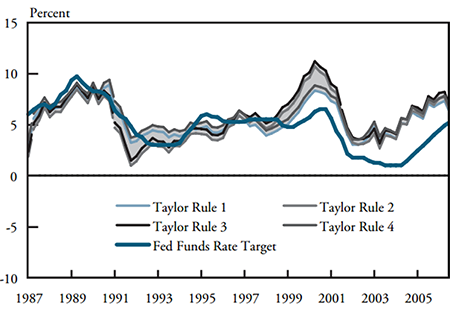 Each version of the rule suggested a federal funds rate target that was nearly identical to what was already in place. And what did this target bring us? The Dot-Com Crash, of course! And so, the Taylor Rule and its supposed air-tight restraints on monetary policy would have still subjected the United States to a major recession fueled by both malinvestment and overconsumption.

The Taylor Rule is no more accurate at determining interest rates than meteorologists are at forecasting the weather. The only difference between the two is that weathermen are precise on occasion, whereas the federal funds rate under the Taylor Rule is, at best, less wrong. Setting the price of money and credit in the name of unleashing the economy’s supposed potential output is the equivalent of enacting price controls on milk to unlock its full buying power. It’s a fallacy that cannot be achieved. The sooner the Fed pawns off its printing press, the sooner its market distortions will be lifted; and the sooner that each individual will be able to make rational decisions that make sense for not only himself or herself, but for the economy at large as well.

Written By
Other Writer
More from Other Writer
Press Release from The American Principles Project August conference to challenge Federal...
Read More

One reply on “Mises.org: The Problem With “Rules-Based” Monetary Policy”