According to the latest ECB figures, as of yesterday total “liquidity” added to the European banking system for that central bank’s ongoing monetary “stimulus” was just shy of €2 trillion. The outstanding balance in the core current account (reserves) held on behalf of the banking system was €1.296 trillion. In the deposit account, banks are holding €686 billion at -40 bps in “yield.”

To create all these euro-denominated numbers, the European Central Bank through its constituent National Central Banks (NCB) has purchased €2.21 trillion through its three main active LSAP’s (Large Scale Asset Purchases): the PSPP, or QE, which buys up sovereign bonds and is the reason for running them through the NCB’s (out of original concern exactly who would bear any default risk); the CBPP3, or the third time the ECB has bought covered bonds from banks; and the Corporate Sector Purchase Program which is self-explanatory.

The numbers given above don’t appear to balance because of the way all this stuff is accounted for. The NCB transactions of QE and other material operations actually subtract from the ECB’s asset side because it isn’t doing them, becoming instead -€1.21trillion in so far accumulated autonomous factors. On the other side, the liability side of the simple balance sheet, there are outstanding €769 billion in normal liquidity operations (OMO) at the MRO.

The net of all these hundreds of billions and trillions is actually unclear. I don’t mean that in an accounting sense, for all the euros are there in the various statements. Rather, what these massive transactions have produced where it counts is truly negligible.

Economists, central bankers, and the mainstream media will all protest that characterization, of course, but they do so with a clear absence of what was supposed to happen (and when). That starts with the very fact that there is any debate at all, given that €2 trillion of so-called money printing doesn’t show up anywhere it should have.

Eurostat, Europe’s statistical agency charged with estimating various economic accounts including the EU’s inflation figures, puts November 2017 inflation for the EA 19 group at just 1.5% (Harmonized Index of Consumer Prices, or HICP). Worse for the ECB, the core HICP rate, which strips out volatile food, energy, tobacco, and alcohol prices, was for the second straight months less than 1% (both October and November work out to a 0.9% core inflation rate). 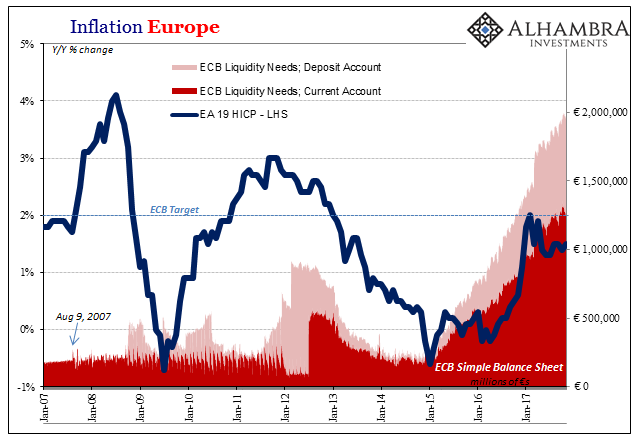 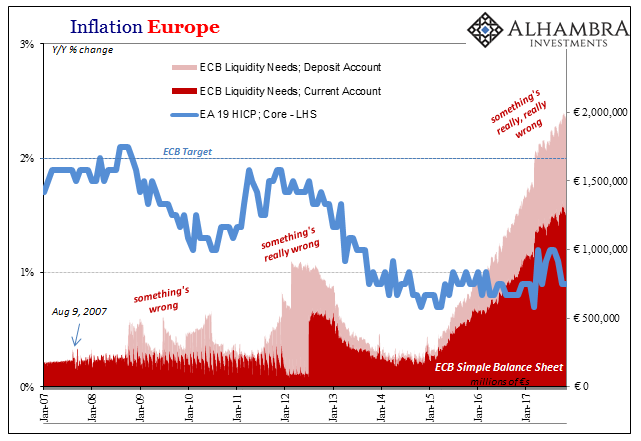 None of these results bear any resemblance whatsoever to any ECB action going all the way back to the original monetary problem in August 2007. It doesn’t matter what type or quantity of transactions the central bank undertakes, the results change only those numbers quoted at the outset. From inflation to lending, there is simply no trace of European monetary policy. 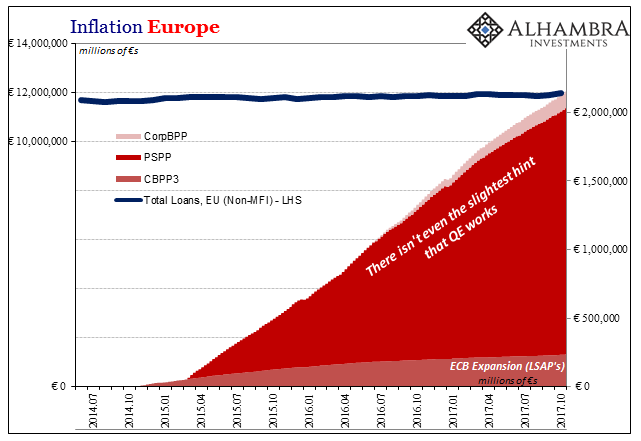 As I write constantly, especially this year, that’s a problem certainly for Europe and its central bankers. But it isn’t contained to just uncomfortable results for the ECB or whatever NCB’s going along. Inflation is a problem (given the explicit 2% targets) both there and here. And it’s not just a vague issue of one different from the other, inflation rates in the US as well as in Europe are very closely aligned, a suspiciously near perfect match for each other. 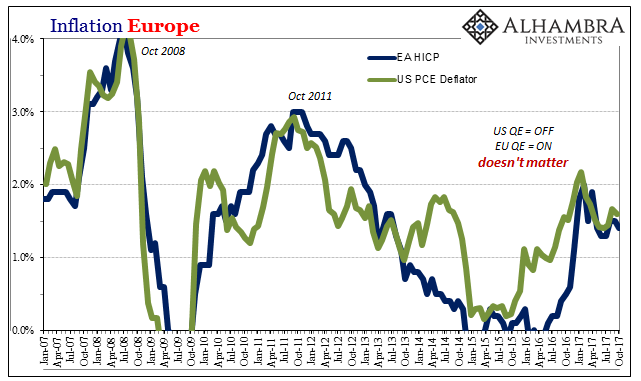 That really shouldn’t be possible particularly given the ECB being so active in “stimulus” and whatnot right now while the Federal Reserve is and has been for several years going in the opposite policy direction. QE or none, stimulating or “raising rates”, the results so far as inflation go are the same even though the numbers are calculated by distinctly separate government agencies using different methods derived from prices recorded continents apart (leaving one to wonder just what other “something” it could be that would harmonize so succinctly more than inflation rates across geography).

While European inflation failed to accelerate much in November, unsurprisingly the BEA reports also today that the US PCE Deflator retreated slightly in October (the BEA is a month behind). Meandering at just 1.59% last month, the FOMC’s target inflation calculation has missed for 64 of the last 66 months; which means, since the inflation target is really about sustained inflation, not just two isolated months earlier this year supported solely by massive oil price base effects, the Fed has failed on its own terms in its primary monetary policy mandate for five and a half years straight. 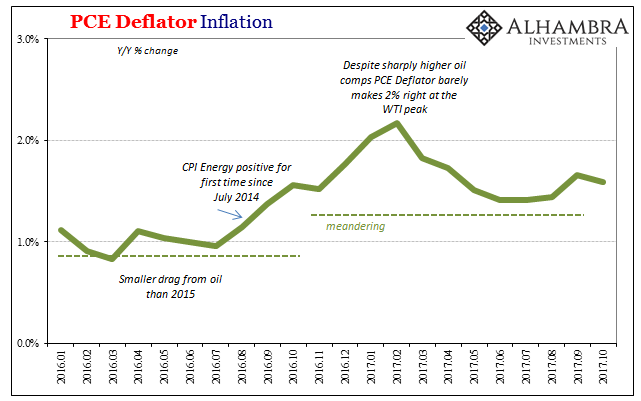 Unsurprisingly, just like in Europe the various “core” metrics don’t suggest this is about to change anytime soon. The rhetoric surrounding the US central bank’s mandate is far more heated than the numbers suggest for the real economy. That’s because the unemployment rate, last calculated for October at a very low 4.1%, really should have meant something long before now, too. 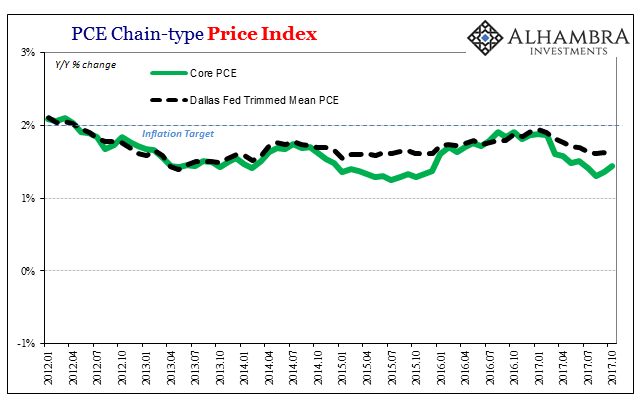 But there is no economic momentum suggested anywhere in these numbers regardless of geography and condition of monetary policy. Because there really should be, the debate has in both places shifted. Since almost all mainstream commentary either directly cheers for the technocracy or at least implicitly accepts every one of its premises regardless of evidence, including “money printing”, the clear and sustained failure in real economic terms (counting total economic output, too, which should be much more than just positive) has meant an overriding focus on just the unemployment rate.

That has certainly been true here, even though right now the unemployment rate is so low it is actually in clear conflict with the PCE Deflator and CPI (creating internal problems for US central bankers as to why that might be). In Europe, they aren’t quite that far advanced, but it’s moving in the same direction. From the Associated Press:

The buoyant economic recovery across the 19-country eurozone has pushed unemployment down to its lowest level in nearly nine years but has yet to translate to a sustained pick-up in wages and prices, official figures indicated Thursday.

“But the unemployment rate” hasn’t worked out very well in the US the past three years, so its usage now for Europe for the same reasons can only mean what it does here. They really don’t know what they are doing, and beyond that they don’t even know why they don’t know. You’d think €2 trillion would be enough for someone at some central bank, anyone of standing, to realize their whole worldview has been invalidated by all these trillions, euros and dollars.

Written By
Other Writer
More from Other Writer
The United States is showing resiliency and strength compared with other leading economies worldwide....
Read More

0 replies on “It’s More Than Just The Absence of Acceleration, It’s The Synchronization Where There Should Be None by Jeffrey P. Snider”