Most experts are of the view that as the economy gains strength the Fed must step in at some stage and introduce a tighter stance in order to prevent the rate of inflation getting out of control.

Why however, should economic growth be positively associated with a general increase in the prices of goods and services?

Let us examine how prices in general could go up. The price of a good is the amount of dollars paid per unit of this good. 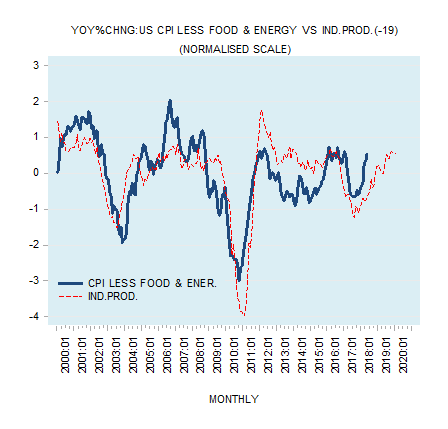 Now, when we talk about economic growth what we mean by that is an increase in the production of goods and services that people require to support their life and wellbeing.

Therefore, if what we are saying is correct, why are the yearly growth rate of the consumer price index adjusted for food and energy (the core CPI) and the lagged yearly growth rate in industrial production are moving in tandem (see chart below)?

Why should more wealth, which raises people’s living standards, also generate bad things – such as a general increase in prices of goods and services?

Now, as long as the machinery of wealth generation is still functioning Fed policy makers can get away with the illusion that they can grow the economy.

Once however, the wealth generation machinery severely damaged because of the Fed’s relentless tampering (also called ‘counter cyclical policies’) the illusion that the Fed can help the economy is shattered and the economy sinks deeply into a black hole.

Any attempt by the Fed to revive the economy by means of massive pumping only makes things much worse.

We suggest that it does not make much sense that genuine economic growth can lead to general price inflation. The positive association between economic activity and price inflation is not because of an expansion in real wealth but comes in response to the expansion in money supply.

0 replies on “Does economic growth cause inflation?”