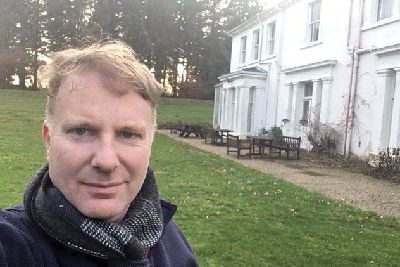 Richard Cobden – the most highly referenced politician in the current climate, successful career in Manchester, MP for Stockport and Rochdale, repealer of the Corn Laws, apostle of Free Trade, advocate of peace and goodwill to all, promoter of international peace, ardent reformer dedicated to raising the poor and vulnerable out of poverty.

Dunford House and Estate, located in Midhurst, West Sussex was altruistically gifted to the YMCA in 1952 as a perpetual, permanent endowment to enable them to use it for general educational purposes. What remains of the Estate is the Grade 2 Listed House and surrounding land, the essence of Richard Cobden’s home. Fast forward to 2019 and the YMCA have closed Dunford with a view to wanting to dispose of it.

The YMCA have been custodians of Dunford honouring the original Trust deed and now the Cobden family together with a number of friends have put an offer to the YMCA to buy it back enabling the YMCA to be released from their stewardship.

Why is it important to save Dunford?

It is the last remaining example of a Victorian middle class Liberal politician home which still contains a number of Cobden family artefacts including the Seal of the Corn Laws and a gift from Napoleon III as gratitude for negotiating a peace treaty with France. The House is of architectural significance with part of it built in the Italianate style fashionable in the 1850’s. Many distinguished guests have visited Dunford over the years including Ghandi, playwright George Bernard Shaw and Beveridge, pioneer and co-creator of the welfare state and in later years Dunford played a significant role in hosting international conferences. Through Cobden’s suffragette and suffragist daughters the House became known as a beacon for feminism in particular for women’s right to vote.

A compelling business plan has been created which would ensure the original intent of the Cobden family continues to be respected. This will involve preserving and modernising Dunford and re-creating a conference centre and also a Museum so the public can see, enjoy and learn about the history of Dunford – Liberalism, internationalism and women’s rights amongst other things.

But as importantly the plan is also to service less fortunate groups of society and embed a Community spirit of wellbeing and togetherness which isn’t always prevalent in today’s society. We would reach out to young people, the elderly and low income groups and help alleviate social concerns such as wellbeing, mental health and loneliness.

Now we need your urgent help to buy back Dunford

We have been actively fundraising for the past few months but we have a gap. Because of this shortfall we cannot confirm a specific offer price to the YMCA (we have given them a guideline) but in early June we will be asked to commit to an offer price.

The best approach is for The Richard Cobden Memorial Trust will be set up as a cooperative which will attract donations and loans/bonds so we can acquire and renovate Dunford. This is all about people today helping save the birthplace and home of a “man of the people”

Here is how it will work

A £500 donation or £500 loan/bond equals one share. A donation is a gift and non-returnable. A loan/bond will be interest-free and will be re-paid to you in 3 or 5 years’ time (depending on your preference). You will also be able to convert the loan/bond to a donation at the end of the term. We also welcome pledges less than £500 as a donation.

Attracting donations and loans/bonds will help us acquire Dunford, apply for grants, renovate in a phased approach, realise our vision of creating a centre of enlightenment, museum and tearoom/café, manage our cash flow and give us time to create a surplus for our charitable causes. We have a contingency plan should we not achieve enough surplus but our business plan is compelling and we believe we will achieve it – with a lot of effort and commitment!

Without your donations or loans/bonds we will be at an impasse and Dunford will be lost forever.

We have a very short period of time and we ask you to confirm what you can donate or lend us (collections will be made only after an offer is accepted). This will enable us to finalise our offer to the YMCA.  It is expected that they will make their decision in mid-June.

Please contact nickcobdenwright@icloud.com confirming the value of your donation or loan by

7 June at the very latest. We can’t thank you enough for your help in making this happen.

Written By
Max Rangeley
More from Max Rangeley
The Cobden Centre will be attending The Jackson Hole Summit in Wyoming...
Read More