A view from Vienna …

The (financial) world is currently long in questions but short in answers. We believe that gold is still one of the few right answers in times of chronic uncertainty.

In the preface to his classic work “The Theory of Money and Credit”, Ludwig von Mises says: “Nevertheless, the problem of money has remained one of the darkest chapters in economics to this day”. Unfortunately one has to admit the nothing much has changed. In my reports and in the following brief introduction I would therefore like to explain how and why money developed.

Carl Menger, the founder of the Austrian School of Economics, tried to find satisfying explanations for observable phenomena of human (inter)action. Menger assumed the subjective perspective (subjectivism) of the acting person in order to construct the economy in its entirety emanating from the human subject. For Carl Menger, human action is the source of insight. Friedrich Hayek is of the opinion that probably every meaningful insight into economic theory has just taken subjectivism a step further.

The Austrians owe the realisation that money is a good to subjectivism. For investors, this may well be the most important lesson the Austrian School has taught them. In our previous Gold Reports we already discussed at length how the most marketable good gradually turned into money in order for indirect barter trade to work. Ludwig von Mises pointed out that over the millennia gold had turned out to be the most suitable good to ensure the functioning of indirect barter trade. This also explains why central banks around the world still hold gold instead of copper or nickel. Gold is therefore unlike any other commodity. Investors who have realised this also understand why gold is gaining in importance on the free market in spite of attempts to the contrary.

The need for a stable means of exchange is as old as mankind. Cigarettes, seashells, salt, goats, dried fish, or paper all fulfilled that role at some point. Their scarceness in relation to annual production made them bad items of value storage; most commodities come with an annual flow that outweighs the stock by a long shot. Therefore in the long run only gold and silver prevailed.

The regression theorem that Ludwig von Mises postulated in “The Theory of Money and Credit” is a pivotal piece when it comes to our understanding of the monetary character of gold. It says that the expectation with regard the future purchasing power of money depends crucially on the knowledge about today’s purchasing power of money. Today’s evaluation of purchasing power in turn is derived from yesterday’s purchasing power. If we continue this regression, we find that at the beginning of the process there has to be a good that was generally needed and had an industrial use. This means that money has emerged from a tangible good. This also includes the demand for jewellery and thus gold. According to Mises only those goods that have a generally accepted utility value can turn into generally accepted, natural money. Gold and silver were already used as jewellery before they assumed their monetary functions. According to Mises, the past experience is the decisive factor for the future trust in monetary stability.

The trust in the stability and the future purchasing power is essential for the value measurement of money. According to the regression theorem people only trust in money as long as it offers a certain degree of safety with regard to the future money supply and thus to the future purchasing power. From our point of view, the high stock-to-flow ratio seems to play an important role in this context. In the following report we want to discuss this central and unique, and hitherto quite disregarded, feature of gold. 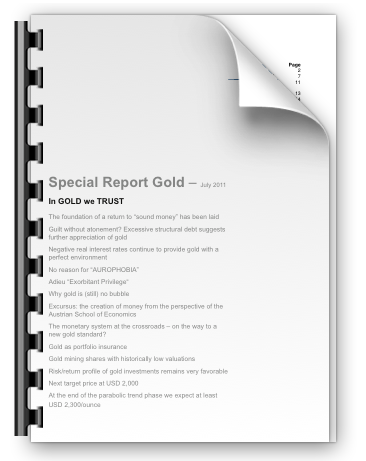 “The Fed insists on saving us from ‘everyday low prices’ – they call it deflation. I submit that in a world of technological wonder,…