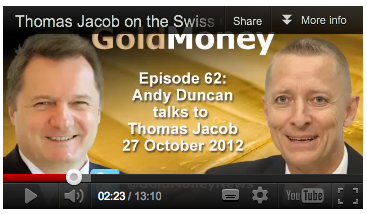 Jacob comments that “there is nothing as powerful as an idea whose time has come”, noting that his is a “non-threatening” means of reintroducing gold as currency again. His group is seeking a constitutional amendment in support of this initiative. Jacob calls it a “complementary” currency, and is emphasising its function as a means of allowing people to save rather than as a medium of exchange.

He thinks that its introduction could potentially help the existing fiat Swiss franc, as it will divert safe-haven buying from it to this new gold alternative. This will mean the SNB has to expound less effort on trying to suppress the value of the franc.

This podcast was recorded on 27 October 2012 and previously published at GoldMoney.com.

Via Edmund Conway at The Telegraph we learn that the debt today cannot be inflated away: In fact, around four fifths of the state’s debt…