“Individuals who cannot master their emotions are ill-suited to profit from the investment process.”
– Ben Graham.

“What really broke Germany was the constant taking of the soft political option in respect of money..
“Money is no more than a medium of exchange. Only when it has a value acknowledged by more than one person can it be so used. The more general the acknowledgement, the more useful it is. Once no one acknowledged it, the Germans learnt, their paper money had no value or use – save for papering walls or making darts. The discovery which shattered their society was that the traditional repository of purchasing power had disappeared, and that there was no means left of measuring the worth of anything. For many, life became an obsessional search for Sachverte, things of ‘real’, constant value: Stinnes bought his factories, mines, newspapers. The meanest railway worker bought gewgaws. For most, degree of necessity became the sole criterion of value, the basis of everything from barter to behaviour. Man’s values became animal values. Contrary to any philosophical assumption, it was not a salutary experience.
“What is precious is that which sustains life. When life is secure, society acknowledges the value of luxuries, those objects, materials, services or enjoyments, civilised or merely extravagant, without which life can proceed perfectly well but which make it much pleasanter notwithstanding. When life is insecure, or conditions are harsh, values change. Without warmth, without a roof, without adequate clothes, it may be difficult to sustain life for more than a few weeks. Without food, life can be shorter still. At the top of the scale, the most valuable commodities are perhaps water and, most precious of all, air, in whose absence life will last only a matter of minutes. For the destitute in Germany and Austria whose money had no exchange value left existence came very near these metaphysical conceptions. It had been so in the war. In ‘All Quiet on the Western Front’, Müller died “and bequeathed me his boots – the same that he once inherited from Kemmerick. I wear them, for they fit me quite well. After me Tjaden will get them: I have promised them to him.”
“In war, boots; in flight, a place in a boat or a seat on a lorry may be the most vital thing in the world, more desirable than untold millions. In hyperinflation, a kilo of potatoes was worth, to some, more than the family silver; a side of pork more than the grand piano. A prostitute in the family was better than an infant corpse; theft was preferable to starvation; warmth was finer than honour; clothing more essential than democracy; food more needed than freedom.”
– Adam Fergusson, ‘When Money Dies: the nightmare of the Weimar hyperinflation’.

“We are currently on a journey to the outer reaches of the monetary universe,” write Ronni Stoeferle and Mark Valek in their latest, magisterial ‘In Gold we Trust’. Their outstanding work is doubly valuable because, as George Orwell once wrote,

“In a time of universal deceit, telling the truth is a revolutionary act.”

“..the monetary experiments currently underway will have numerous unintended consequences, the extent of which is difficult to gauge today. Gold, as the antagonist of unbacked paper currencies, remains an excellent hedge against rising price inflation and worst case scenarios.”

For several years we have advocated gold as a (necessarily only partial) solution to an unprecedented, global experiment with money that can only end badly for money. The problem with money is that comparatively few people understand it, including, somewhat ironically, many who work in financial services. Rather than debate the merits of gold (we think we have done these to death, and we acknowledge the patience of those clients who have stayed the course with us) we merely allude to the perennial difficulty of investing, namely the psychology of the investor. In addition to being the godfather of value investing, Ben Graham was arguably one of the first behavioural economists. He wisely suggested that investors should

“Have the courage of your knowledge and experience. If you have formed a conclusion from the facts and if you know your judgment is sound, act on it – even though others may hesitate or differ. You are neither right nor wrong because the crowd disagrees with you. You are right because your data and reasoning are right.”

“In the world of securities, courage becomes the supreme virtue after adequate knowledge and a tested judgment are at hand.”

Judgment has clearly been tested for anyone who has elected to hold gold during its recent savage sell-off. The beauty of gold, much as with a classic Ben Graham value stock, is that as it gets cheaper, it gets even more attractive. This should be self-evident, in that an ounce of gold remains an ounce of gold irrespective of its price. This puts gold (and value stocks) markedly at odds with momentum investing (which currently holds sway over most markets), where once a price uptrend in a given security breaks to the downside, it’s time to head for the hills.
A few highlights from the Incrementum research:
 Since 1971, when President Nixon untethered the dollar from its last moorings to gold, “total credit market debt owed” in the US has risen by 35 times. GDP has risen by just 14 times. The monetary base, on the other hand, has risen by, drum roll please.. some 54 times.
 If, like Incrementum and ourselves, you view gold primarily as a monetary asset and not as an industrial commodity, it has clearly made sense to have some exposure to gold during these past four decades of monetary debauchery.
 They say a picture paints a thousand words. Consider the following chart of total US credit market debt and ask yourself: is this sustainable? 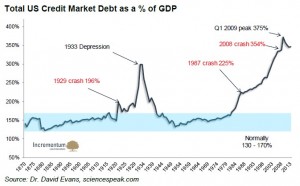 To repeat, there are only three ways of trying to handle a mountain of unsustainable debt. The options are:
1) Maintain economic growth at a sufficient rate to service the debt. We believe this is grossly unlikely.
2) Repudiate the debt. Since we also operate within a debt-based monetary system (in which money is lent into being by banks), default broadly equates to Armageddon.
3) Inflate the debt away.

At the risk of pointing out the obvious, which path do we consider the most likely? Which path does it suit grotesquely over-indebted governments and their client central banks to pursue?
But it does not suit central banks to be caught with their fingers in the inflationary cookie jar, so they now have to pretend that deflation is Public Enemy Number One. Well, deflation is certainly a problem if you have to service unserviceable debts. So it should come as no surprise if this predicament is ultimately resolved through an uncontrollable and perhaps inevitable inflationary or stagflationary mess.

So we have the courage of our knowledge and experience. (In fact, of other people’s experience, too. As the title of Robert Schuettinger and Eamonn Butler’s book puts it, we have ‘Forty Centuries of Wage and Price Controls’ and their inevitable failure to draw upon. We know how this game ends, we just don’t know precisely when.) We have formed a conclusion based on facts and we know our judgment is sound. For the last two years, the crowd has disagreed with us on gold. We think we are right because we think our data and reasoning are right. Not that we don’t see value in other things, too: bonds of unimpeachable quality offering a positive real return; uncorrelated assets; value and ‘deep value’ stocks. And we ask a final question: if not gold, then what? Are we deceiving ourselves – or are our central bankers in the process of deceiving everyone?

Episode 91: GoldMoney’s Andy Duncan speaks to Mike “Mish” Shedlock about the entire global financial situation, but particularly focusing upon the debate between those who…