The distinguished writer and economist for the Sunday Times, David Smith, on the 30th of August in this article wrote the following;

Why have stock markets risen so strongly? It has been a two-stage process. The initial spurt from the dark days of early March came with a realisation that the world was not entering a second great depression (third if you count the end of the 19th century) and that not all banks would have to be nationalised. Markets were priced for disaster and decided this had been averted.

The second leg has been driven by good figures. “Economic data generally continue to be better than expected, which suggests that we are emerging from the longest and deepest recession” says Bob Doll, chief equity investment officer at Black Rock.

So it would appear that to this economist the FTSE moves only because of expectations about the future. This may well be part of the case, but as I have argued here, it is the state of liquidity that determines the great movements in the stock market indices. The Bank of England has expanded its balance sheet by some 158% since September of last year. This massive amount of liquidity coupled with the £175 billion of Quantitive Easing, has to go somewhere in the economy. If people’s demand to hold money remains the same, those recipients of all this excess liquidity can only but spend it!

To recap, I wrote:

If more money exists today than yesterday then all other things being equal, we can deduce that there is a surplus of money in relation to money demanded. What happens to this surplus? The only way to get shot of a surplus of money is to spend it. This spending increase prices of the goods and services that it is being spent on. One of the most liquid places for you to spend this surplus is to put it in near liquid assets such as highly traded shares. As excess liquidity builds up all over the world, over and above money demanded, we see various stock exchanges rising. In a separate article, our colleague Sean Corrigan points out that the huge increase in M1 in China has set the Shanghai Composite reaching for the top of Mount Everest!

We should always remember that we describe as an asset bubble a large increase in the price of those assets. A price is the amount of pounds Sterling we pay for our assets. This is the same as saying an asset bubble is a large increase in the payment of pounds Sterling for these assets. So the larger the monetary footprint in the economy, the more Sterling paid for things. Certainly this was the case for the Housing Boom and if the FTSE continues in its rise, I strongly suspect that this is the case here.

David Smith then continues to say,

We should not read too much into share prices. One thing we have learnt during this crisis is that markets are skittish, and hugely influenced by confidence and mood. There are solid economic reasons why the stock market has risen, however. Cazenove, taking the bull by the horns, says there is still plenty of value in British shares and limited downside risks.

The key influences on markets will be surprises. On the plus side, markets have priced in a recovery, both in Britain and globally. On the minus side, that recovery is expected to be weaker than usual, because of the banking system’s long period of convalescence, tight credit and a throbbing fiscal hangover that will require years of tax increases and public spending cuts.

Where the stock market goes depends on where the news comes in relation to these expectations.

To a certain extent I do not disagree with this. I would qualify this by saying that the above sentiments are what causes the FTSE to extend from trend, but not the cause of the trend. So what is the cause of the large movements in the stock exchange?

My contention is that it is the rate of monetary pumping into the economy that creates excess liquidity. If you can actually define money and count it, you can see the effect of excess money pumping very clearly. My co authoured working paper cited here shows the correct way to count money and what the problems are with the traditional M0 / M4 measures. I am very glad we have created a lot of interest on the Social Science Research Network. We then introduce MA or Money Actual, sometimes called the AMS, Austrian Money Supply, it shows a very convincing correlation to GDP and retails sales. 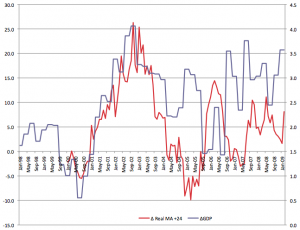 Changes in MA +24 months and GDP

Changes in MA and retail sales

Here we add the correlation with FTSE: 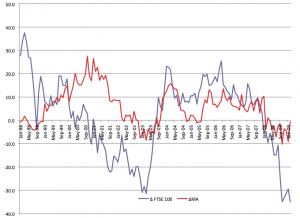 Changes in MA and the FTSE

As you can see, the broad movements in the money supply effect the FTSE. As people have more liquidity in relation to their money demand, it moves into liquid markets. Liquid markets such as FTSE and as Corrigan shows, the Shanghai Composite, rise. This applies to virtually any of the stock markets of the world. The government is the monopoly issuer of money or currency and privately created bank credit can only exist on the scale it does by the granting of special legal privilege to bankers to not keep their creditors whole at all points in time. As these vital functions are controlled in full by the State, it should come as no surprise that the main influence on FTSE is the prevailing surplus liquidity of the day, first and foremost, then investor sentiment.

Mr. Steil is director of international economics at the Council on Foreign Relations. Ms. Smith is an analyst at the Council. President of the European…