Okay, so once the central banking cartel gets its increasingly clumsy act into gear, the silver price will fall below $30 dollars an ounce again, to temporarily hide the ongoing failure of the 39-year experiment in global fiat currencies, since the dollar became a detached paper currency in 1971.

However, I thought we ought to mark the occasion of silver hitting the remarkable $30 dollars an ounce anyway, just to mark some kind of psychological watershed.  Next step, after the attempted crippling, the magical $50 dollars, which really ought to mark the beginning of the end for dishonest paper money, though I’m sure the dishonest paper money cartel will come up with some excuse as to why it won’t. 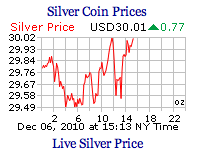 I’m not sure how likely Max Keiser’s $500 dollar silver is, in the short term.  However it should be fun watching the cartel trying to get the price back down under $30 dollars again over the next few days, perhaps with another rise in silver future margin requirements being the first port of call.

“We are on the verge of seeing a potential massive squeeze in the gold market.  We witnessed this last month, and it appears to be rehearsing for the same play this month.  Physical demand out of Asia is overwhelming the egregious paper gold shorts.  If we are thinking this for gold, it is cubed for silver.”

Let us see if the cartel has as much success in nobbling the silver vigilantes as they had in crippling the Hunt brothers. My guess is that they’ll have some short-term success, but this time the long-term silver genie really is out of the bottle.  You just cannot keep pouring all of that paper out of the printing press without something giving.

Oh how central bankers must hate physical gold and silver.  If you have any, make sure it’s safe and cannot be confiscated by their friends in the world’s governments and treasuries, as that may be their final card if this precious metal embarrassment keeps growing and making a mockery of their Keynesian nonsense that real wealth can be printed on a press.

Written By
Andy Duncan
More from Andy Duncan
After you have read The Ethics of Money Production, by Jörg Guido...
Read More