In frivolous mood a couple of weeks ago, I wrote the following within a Cobden Centre article:

“In the meantime, when the BBC Newsnight programme starts quoting the closing gold price at 11:15pm, rather than the pound-dollar paper-shuffling price, we will really know that we have entered a truly new paradigm.”

I was therefore shocked, shocked to witness the following major report on last night’s Newsnight programme: 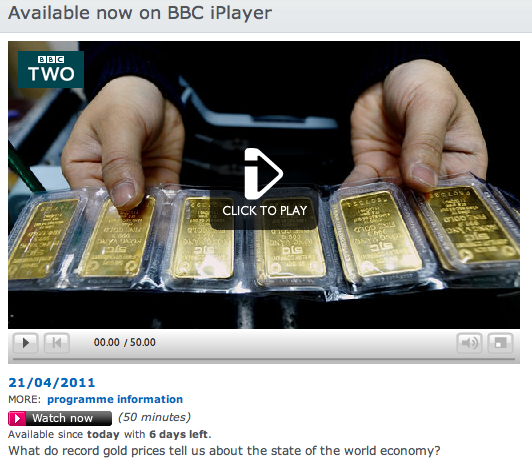 Click through the link above (for as long as it works, which should be until approximately the 28th of April, 2011, and possibly only in the UK), and be as amazed as I was. It’s the first piece up, after the programme intro, but if you lack the will to last that long, spin through to 1:18 on the clock).

Obviously, the content is hilarious and heavily skewed towards Gosplan central planning and global monetary socialism, with three Gosplan technocrats dancing on the head of a pin, but my jaw literally dropped when I saw the piece come up and I even managed to refrain from shouting at the television every time David Blanchflower opened his mouth, which probably tells you how stunned I was by the broadcast topic of this piece.

However, what really made it for me was when Diana Furchtgott-Roth — a former chief economist at the U.S. Labor Department and therefore one of the Anglo-American Gosplan technocrats who got us into this mess, along with Blanchflower — came on to give us her two copper-plated zinc cents’ worth.

I’ll let you listen to her words yourself, but what I really loved was the thick golden necklace that she wore — nay, Sutton Hoo golden burial torque! 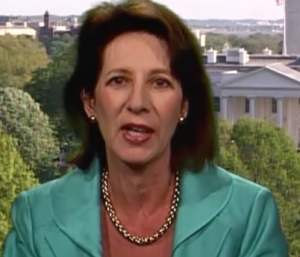 One only hopes that it was a deliberate dress choice on her part, and formed some kind of intended subliminal message for the watching audience.

Written By
Andy Duncan
More from Andy Duncan
In his usual delicate and roundabout way, in the first of two...
Read More

One reply on “BBC Newsnight: What do record gold prices tell us about the state of the world economy?”