A very intelligent friend of mine of markedly different political persuasions said the other day that he avoided “technical economic arguments” with me as I’ve just graduated with a degree in economics. I was rather sad to hear this.

The simple truth is that after doing a module called, say, ‘Introduction to Economic Principles and Policy’, you will not study very much more which will add greatly to your understanding of the subject. Beyond that, in an ‘Intermediate Microeconomics’ course for example, you are simply ladling mostly unnecessary algebra onto the subject.

Take this from a course in ‘Intermediate Macroeconomics’ for example: 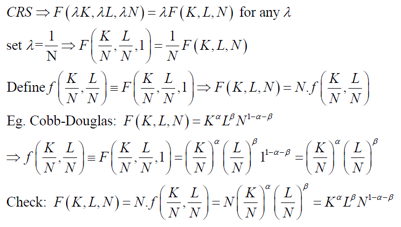 This is actually some of the more accessible math involved in modern economics. Furthermore, the concepts it is dealing with, constant returns to scale and the per worker production function, are pretty straightforward. Yet many, including almost all university economics lecturers, will tell you that this is economics. It is, in fact, simply applied algebra – mathematics looking for a real world application. Economists eager to give their art the patina of science and mathematicians searching for real world relevance have combined to render economics impenetrable.

This trend also stems from the view of economics as the study of a mechanism. People may now laugh at the model of the economy A.W. Phillips built in the basement of the London School of Economics in 1949 with its gurgling pipes full of different coloured liquids representing money literally sloshing around an economy controlled by sluice gates. But it isn’t conceptually different from the computerised models that are in use today guiding research and government policy.

These models often fail. If your model is based on erroneous assumptions, such as the creation of phantom capital called Quantitative Easing actually stimulating an economy, you will get erroneous outputs; Garbage In Garbage Out as they say. But there is a more fundamental problem. There is no exogenous ‘thing’ called ‘The Economy’ which can be quantified and controlled, there is only each of us doing what we do every day. That is why Ludwig von Mises called his great treatise on economics ‘Human Action’. Or as Friedrich von Hayek rapped recently “The economy’s not a car. There’s no engine to stall. No experts can fix it. There’s no “it” at all. The economy is us”.

It is little wonder that even intelligent people feel themselves cowed and run in terror from the thicket of abstraction that shrouds modern economics. It needn’t be like this. The great works of the discipline, those of Adam Smith or Carl Menger for example, managed to lay the foundations of the subject without it.

And it is sad that people like my friend feel put off because the economy affects all of us and, to return to the point made by the rapping Hayek, it is the study of all of us. Given this we all have economic insights by virtue of being human beings, the very subject of economics itself. As von Mises wrote:

Economics must not be relegated to classrooms and statistical offices and must not be left to esoteric circles. It is the philosophy of human life and action and concerns everybody and everything. It is the pith of civilization and of man’s human existence.

Do not leave economics to the abstract eggheads. Pick up Economics in One Lesson by Henry Hazlitt, Free to Choose: A Personal Statement by Milton Friedman or even Eat the Rich: A Treatise on Economics by P.J. O’Rourke: writers who, in these books and others, passed the economist Armen Alchian’s test of whether they truly understood the subject – they could explain it to someone who doesn’t know a darn thing about it.

Economics is about you. It is your subject. Reclaim and enjoy it.

Written By
John Phelan
More from John Phelan
There is a pleasure almost cruel in seeing someone deploy irrefutable logic...
Read More