Could a bank exist independent of state support, and could it act as a bastion of liberty?

I recently came across the original quarto edition of the “Act of Parliament For Erecting a Bank in Scotland, Edinburgh, July 17th 1695.”

I have scanned it and you can download it here. 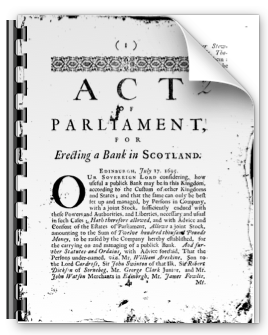 Reading this charter is a most wonderful experience as it shows that at the emergence of banking, the spirited founders of this bank distrusted their government (the King and his Ministers) so much that they forbade dealings with them!

If you were found guilty of lending any money to or doing any business with the government, you had to pay a penalty of three times the value of the transaction, a fifth of which would go to the person who informed on you, with the rest donated to good public causes.

Oh, if banks could only operate like that today, the governments of the world would have to fund their business by taxation only. This would force them to say to all their citizens “vote for me, I am going to take £X from A,B & C people and give to X,Y & Z more deserving causes”. Knowing the cost fully, the people would then judge on the merits of what was proposed, rather than trust the promise that this mysterious entity called the government, seeming to exist over and above its people, with its own money, will be the font of all goodness.

The recent €1 trillion money printing binge by the ECB and the attendant purchases of government bonds would not have been allowed in days gone by. This banditry was rightly viewed as contrary to interests of the people.

If you can be patient with the language, you will enjoy reading this act. Here is the text from the last page:

That it shall not be lawful nor allowable for the said Company, Governor, Deputy -Governor, Directors, or Managers thereof, upon any Ground or Pretence whatsoever, directly nor indirectly, to use, exerce, or follow any other Commerce, Traffick, or Trade with the joint Stock to imployed in the said Bank, or any Part thereof, or Profits arising therefrae, excepting the Trade of lending and borrowing Money upon Interest, and negotiating Bills of Ex-change allenarly and no other. Providing also, Likeas it is hereby expressly Provided,  Enacted and Declared,That in case the Governor, Deputy-Governor, Directors, or other Managers of the said Company, shall at any Time happen to purchase for the Use and Behoof of the said Company any Lands, Rents, or other Heritage belonging to His Majeity, His Heirs and Successors, or shall advance or lend to His Majesty, His Heirs or Successors, any Sums of Money in borrowing, or by Way of Anticipation upon any Part, Branch or Fund of the ordinary Rent or Casualties of the Crown, or of any Supply, Cess, Excise, Custom, Pole-Tax, or any other Supply or Taxation already granted, or which shall happen to be granted at any Time hereafter to His Majesty and his foresaids, any Manner of Way whatsoever, excepting these Parts, Branches, or Funds of the saids Rents, Casualties, or Impositions foresaids, upon which a Credit of Loan shall happen to be granted by Act of Parliament allenarly ; then and in that Case, the said Governor, Deputy-Governor, Directors, or other Managers, one or more of the said Company who shall consent, agree to, or approve of the said Purchase, Advance or Lending to His Majesty and His foresaids, and ilk ane of them so agreeing and approving, and being found guilty thereof according to Law, shall be liable for every such Fault, in the Triple of the Value of the Purchase so made, or the sums so lent, whereof a fifth Part shall belong to the Informer, and the Remainder to be disposed of towards such publick uses, as shall be appointed by Parliament and not otherwise. And it is likewise hereby Provided, That all Foreigners who shall join as Partners of this Bank, shall thereby be and become naturalized Scots-men, to all Intents and Purposes whatsoever.

Extracted forth of the Records or Parliament by TARBAT Cl-Regifiri.

6 replies on “Could a bank exist without state support?”