The Federal Reserve Board originally led us to believe that it was necessary to expand money supply through quantitative easing to offset the contraction of bank credit. Bank credit is no longer contracting, and indeed was already expanding when QE3 was introduced. This objective is now being satisfied as illustrated in the chart below: 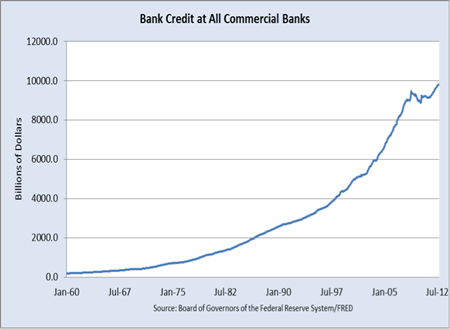 Perhaps helping to drive this trend is a fall in the general level of charge-off and delinquency rates to less than 1.5% of all loans and leases, down from the crisis levels of twice that. According to an article at Bloomberg dated August 6, “…. households have cut debt since the 2008-09 crisis, while banks have increased liquidity and bolstered capital buffers”. So the up-coming fiscal cliff permitting, conditions are in place for a further expansion of bank credit and we can put the past behind us.

As well as conventional bank lending, there is also shadow banking to consider. The Global Shadow Banking Monitoring Report 2012 tells us that at $23 trillion for the US alone, it dwarfs reported bank lending. According to Exhibit 3-3, before the banking crisis, shadow banking in the US was growing at a compounded annual rate of over 10%, and subsequently has contracted slightly. But this probably masks a more recent pick-up in the growth rate in line with on-balance sheet bank lending, and we must also take into account the far greater growth in shadow banking in non-US financial centres, particularly in the UK, Hong Kong, Singapore and Switzerland, where restrictions on re-hypothecation are often less onerous.

The problem with this elephant-in-the-room is that shadow banking requires no bank capital to back it, because it works on collateral pledged by non-bank institutions and the general public. It is comprised principally of securitised consumer property loans and mortgages, as well as sovereign debt. And because the global financial system is fully integrated, the $22 trillion equivalent that is the eurozone’s exposure to shadow banking must also be seen as a significant risk: no wonder the European Central Bank has signalled it will save the eurozone in its entirety, at all costs. This is also interest rate sensitive stuff, and with no capital buffers to absorb losses it will not take much of a rise in rates to trigger a crisis, even without an external shock.

Now consider what happens if interest rates are forced upwards by the economic recovery, clearly signalled by the bank lending statistics in the chart above. The value of this collateral will fall, and anything more than a modest interest rate increase will risk collapsing the entire financial system. The Fed, along with the other central banks is effectively trapped: it can no longer manage the money supply in accordance with its mandated objectives. It is now the Fed’s primary function to worry about shadow banking, over which it has no direct control, other than to make sure sufficient collateral of good quality continues to be available.

There is a worrying complacency in financial circles about this problem, which suggests that financial assets are not discounting the serious risk of systemic failure. It demands serious attention.

8 replies on “Shadow banking: the next landmine”