“When, more than 100 years ago, George Gilbert Williams, president of the famously conservative Chemical Bank, was asked for the secret of his success, he replied: “The fear of God.” You can have the fear of God or the socialisation of risk, but you cannot have both at once.”

– James Grant in the Financial Times, ‘Banks should rediscover the art of caution’.

The role of economists, writes Charles Gave, along with that of governments and central banks, is to promote a stable monetary and legal framework for the risk-takers (entrepreneurs, money managers etc..) to make their decisions as rationally as they can.

Unfortunately, this has not happened. Instead, in a new and improved declination of Friedrich Hayek’s “fatal conceit,” we seem to be moving away from “scientific socialism” to “scientific capitalism” – where the overconfident and overeducated control-engineers are no longer members of the avant garde of the proletariat, but plain, boring and well-meaning economists working in the entrails of the world’s central banks. My intent is not to show why these economists will fail (bigger and brighter minds such as Hayek, Mises, Friedman, etc. have already done this) – but rather to review the impact that the misguided manipulation of the price of money (exchange and interest rates) is having on the notion of risk.

As Mr Gave points out, as a direct consequence of central bank manipulation of asset prices, today’s volatility readings have absolutely nothing to do with the underlying risks. It is, therefore, hard to escape the following conclusions:

In an economic system, if the goal of the authorities is to reduce some particular risks, then the sum of all these suppressed risks will reappear one day through a massive increase in the systemic risk and this will happen because the future is unknowable.

To put it another way, our central banking leaders seem to have concluded that to save the system, it will be necessary to destroy it.

Credit expansion, wrote the great Austrian economist Ludwig von Mises, is not a nostrum to make people happy. “The boom it engenders must inevitably lead to a debacle and unhappiness.” That seems a pretty accurate summary of the current situation for the western economies: a debacle, and unhappiness. He also wrote that “The final outcome of the credit expansion is general impoverishment.” Again, check.

What is needed for a sound expansion of production is additional capital goods, not money or fiduciary media. The credit boom is built on the sands of banknotes and deposits. It must collapse.

If the credit expansion is not stopped in time, the boom turns into the crack-up boom; the flight into real values begins, and the whole monetary system founders.

It seems to us that we may be fast approaching the tail end of a 40 year experiment in money. When President Nixon severed the link between gold and the US dollar in 1971, he opened the floodgates for a credit expansion to dwarf all credit expansions. The arteries of the global monetary system are now clogged with debt. Since it cannot all be serviced or repaid, it won’t. But our politicians are nothing if not committed to landing subsequent generations with the bill.

It may now be impossible to keep the show on the road. The conventional financial media continue to keep central bankers on their pedestal: having fawned over the appointment of Mark Carney at the Bank of England, the Financial Times has just declared ECB president Mario Draghi their Person of the Year, for having “turned the tide in the three-year-old eurozone crisis”. Oh really ? But the FT has never understood Europe or managed to justify the case for Britain’s continued slow garrotting within it, so it is hardly likely to start now. The rest of us know the Emperor’s new clothes when we see them.

Fund managers Lee Quaintance and Paul Brodsky of QB Asset Management have long written with great articulacy about the nature of the problem. Here is an extract from their most recent commentary, ‘It’s Time’:

Gold bugs can’t understand how the public can be so unaware, how highly intelligent policy makers can be so immoral, and how the mainstream media can be so incurious. We can’t understand why more men and women in the investment business haven’t joined some of the more successful ones that have come around to precious metals and have taken substantial positions in them for their funds and personal accounts..

Regardless of whether one is investing personally or as a fiduciary, conventional financial asset allocation models and procedures are obviously failing and the reason is simple: the currencies in which financial assets are denominated are gravely flawed – leveraged beyond reconciliation and incapable of generating positive real returns for assets denominated in them, or ongoing consumer and business confidence while the leverage is being transferred from banks to central banks, and from central banks to government balance sheets. The political / policy dimension is boxed. We think prudence demands stepping away from conventional financial asset allocation models.

..Boundless inflation will become apparent to the public either when: 1) banks begin using their new reserves to try to issue more credit; 2) mysterious “animal spirits” (i.e., when leverageable balance sheets meet common greed) spontaneously combust, or; 3) next Tuesday for no apparent reason. Why all the fuss about what the catalyst will be or when it might occur (especially when risk-free real rates are negative) ? Most bonds with any sort of duration and stocks held mostly by levered entities or representing businesses that sell goods or services to leveraged consumers are likely to be losers in real terms. Alternatively, precious metals (physical held above and below ground) and natural resources with inelastic demand properties are significantly under-owned. 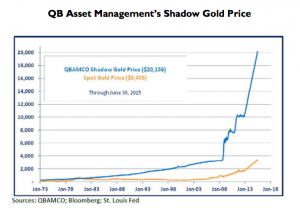 QB’s shadow gold price uses the Bretton Woods monetary calculation for valuing the fixed exchange rate linking gold to the US dollar – Base Money divided by US official gold holdings. As QB take pains to point out, this is not necessarily a target price for gold. But it does suggest (to us) that any talk of gold being in a bubble when it’s also a) almost completely unheld by institutional asset managers and b) trading at around $1700 (as opposed, say, to $20,000), is absolute nonsense. The graph above incorporates the most recent Fed announcement of debt monetisation levels ($85 billion per month through to June 2015).

But how do we square this anticipated flight into real assets with Russell Napier’s recent warning about outright deflation ? (See our recent commentary, ‘Sobering stuff’.) Well, we can’t. But don’t blame us – blame the unelected brain donors running our central banks. Armchair warriors can watch this titanic battle from a safe distance, as central bank inflationism collides with monumental deleverage. Or as Russell himself recently pointed out, money created in London by Mervyn King in the morning is destroyed by Stephen Hester up in Edinburgh in the afternoon.

The good folk at QB ask a compelling question:

“Have the vast majority of allocators chosen not to educate their constituents about the impacts of monetary inflation when none is visible because it is not good business? (At the end of the day, smart portfolio managers with dumb investment constraints are dumb money.)” [Emphasis ours.]

We honestly wanted to round off 2012 with a more uplifting summary of the investment scene, but a grim combination of central bank insanity and financial media buffoonery would make any such summary an offence against reason and common decency. So we conclude by reiterating our commitment to an investment policy unconstrained by conventional fetters and freely allocating across as many disparate asset types as seem reasonable in a world gravely impacted by the monetary and financial distortions perpetrated by doltish control-engineer goons. Although we would naturally wish for a more benign investment climate, we must play the hand we’re dealt. The pessimist complains about the wind. The optimist expects the wind to change. The realist adjusts the sails.

One reply on “Goons versus gold”