“The first panacea for a mismanaged nation is inflation of the currency; the second is war. Both bring a temporary prosperity; both bring a permanent ruin. But both are the refuge of political and economic opportunists.”
– Ernest Hemingway.

In one of the most powerful and memorable metaphors in finance, Charles Ellis, the founder of Greenwich Associates, cited the work of Simon Ramo in a study of the strategy of one particular sport: ‘Extraordinary tennis for the ordinary tennis player’. Ellis’ essay is titled ‘The loser’s game’, which in his view is what the ‘sport’ of investing had become by the time he wrote it in 1975. Whereas tennis is ‘won’ by professionals, the practice of investing is ‘lost’ by professionals and amateurs alike. Whereas professional sportspeople win their matches, investors tend to lose the equivalent of theirs through unforced errors. Success in investing, in other words, comes not from over-reaching, in straining to make the shot, but simply through the avoidance of easy errors.

Ellis was also making the point that as far back as the 1970s, investment managers were not beating the market; rather, the market was beating them. This is a mathematical inevitability given the crowded nature of the institutional fund management marketplace and the impact of management fees on end investor returns. Ben W. Heineman, Jr. and Stephen Davis for the Yale School of Management asked in their report of October 2011, ‘Are institutional investors part of the problem or part of the solution?’ By their analysis, in 1987, some 12 years after Ellis’ earlier piece, institutional investors accounted for the ownership of 46.6% of the top 1000 listed companies in the US. By 2009 that figure had risen to 73%. That percentage is itself likely understated because it takes no account of the role of hedge funds. Also by 2009 the US institutional landscape contained more than 700,000 pension funds; 8,600 mutual funds (almost all of whom were not mutual funds in the strict sense of the term, but rather for-profit entities); 7,900 insurance companies; 6,800 hedge funds; and more than 2,000 funds of funds (the horror! the horror!)

In what ways do institutional asset managers create a rod for their own backs? The most widespread, and probably the most damaging to the interests of end investors, is in benchmarking. Being assessed relative to the performance of an equity or bond benchmark effectively guarantees (post the impact of fees) the institutional manager’s inability to outperform that benchmark – but does ensure that in bear markets, index-benchmarked funds are more or less guaranteed to lose money for their investors. In equity fund management the malign impact of benchmarking is bad enough; in bond fund management the malign impact of ‘market capitalisation’ benchmarking is disastrous from the get-go. Since a capitalisation benchmark assigns the heaviest weightings in a bond index to the largest bond markets by asset size, and since the largest bond markets by asset size represent the most heavily indebted issuers – whether sovereign or corporate – a bond- indexed manager is compelled to have the highest exposure to the most heavily indebted issuers. All things equal, therefore, it is likely that the bond index-tracking manager is by definition heavily exposed to objectively poor quality (because most heavily indebted) credits. Given that we are living through a once-in-a-generation crisis in the bond markets, chances are that this game will not end well for benchmarked managers.

Quite how this institutional insistence on benchmarking arose – whether versus indices or versus peer groups – is not precisely clear. But it would seem to give the majority of asset managers regulatory cover for sheltering amongst the consensus. And as SocGen’s Albert Edwards puts it, “The late Margaret Thatcher had a strong view about consensus. She called it: ‘The process of abandoning all beliefs, principles, values and policies in search of something in which no-one believes, but to which no-one objects.’” And the prevailing institutional imperative is to give customers what they think they want, or what can easily be sold, which most of the time is probably the same thing. Which accounts for the thousands of me-too fund offerings clogging the ‘Managed Funds’ section of the FT, most of which would be completely superfluous in a properly efficient market.

A particularly intriguing experiment used by Montier relates to our tendency towards anchoring. Feel free to follow it yourself. It goes as follows:

In Montier’s words, anchoring is “our tendency to grab hold of irrelevant and often subliminal inputs in the face of uncertainty.”

The idea of the experiment, then, is to see whether respondents were influenced by their (random and irrelevant) phone number as a gauge in trying to estimate the number of doctors in London. The results of the experiment can be seen below:

So our thesis goes as follows. In the absence of reliable knowledge about the future, investors have a tendency to anchor onto something – anything – to help them assess or predict future market returns. What better anchor to use for future market returns than prior ones? This is where the story gets more intriguing still. 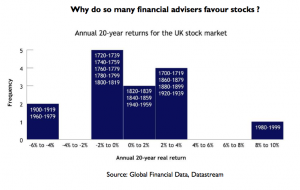  
The chart above attempts to answer a rhetorical question: why do so many financial advisers advocate equity-centric portfolios? We think the reason is: because so many of them worked during the most recent financial period. On a discrete 20 year basis, the period 1980-1999 is the only period of the last 300 years in which annual, real returns from the UK market offered investors between 8% and 10% on average. Note that for much of that three-century period, annualised real returns ended up either side of zero.

We think the story gets more intriguing still. We would advocate the thesis that a good part of those returns was somewhat illusory in nature. More specifically, given that they occurred during a once-in-a-century period of extraordinary credit creation, those market returns were in large part borrowed from the future, in the same way that governments have been funded, and their colossal bond markets serviced, by essentially loading the ultimate cost and the final reckoning onto the next generation.

If this thesis is even half correct, investors piling into stocks now, at current highs, on the premise of recapturing some of those 8% – 10% real annual returns, are being at least somewhat delusional. The credit bubble has burst. Messily. The stock market has not necessarily woken up to the fact. This does not detract from the sensible analysis of equity market opportunities. But for any investment, its most important characteristic is its starting valuation. Buy attractive equities at sufficiently undemanding multiples and you should rightly expect to do well. Buy – let us call it the index – expensively, and after a grotesque bubble of credit and associated distortions throughout the capital market structure, egged on by central banks who have long abandoned what limited policy mandates they previously pursued, and expect things to end in a train wreck. Winning the loser’s game is fine. Losing the loser’s game is not something to which we aspire.

Written By
Tim Price
More from Tim Price
“The most terrifying words in the English language are: ‘I’m from the...
Read More

4 replies on “Losing the loser’s game”