“Sir, So Ed Miliband “forgot” to mention the deficit. This from a man who was a key member of the team that ran up a massive structural debt pile when the UK should have been enjoying a cyclical surplus. He was part of a Labour administration that took the UK economy to the brink of effective bankruptcy. Yet less than five years on, as we still struggle to deal with the toxic mess that he and his colleagues left behind, he “forgot” to mention it. This surely ranks alongside “the dog ate my homework” for feeble and unbelievable excuses for non-performance of basic required tasks.”

“Politicians and diapers have one thing in common. They should both be changed regularly, and for the same reason.”

It should be striking that government bonds, in nominal terms, have never been this expensive in history, even as there have never been so many of them. The laws of supply and demand would seem to have been repealed. How could this state of affairs have come about ? We think the answer is three-fold:

What might substantiate our third claim ? It would be the festering intellectual plague that bedevils the fund management world known as indexation. Bond indices allocate their largest weights to the most indebted issuers. This is the precise opposite of what any rational bond investor would do – namely, to overweight their portfolio according to those issuers with the highest credit quality (or perhaps, all things being equal, with the highest yields). But bond indices do exactly the opposite. They force any manager witless enough to have fallen victim to them to load up on the most heavily indebted issuers, which currently also happen to offer amongst the puniest nominal yields. As evidence for the prosecution we cite the US Treasury bond market, the world’s largest. The US national debt currently stands at $17.7 trillion. With a ‘T’. Benchmark 10 year Treasuries currently offer a yield to maturity of 2.5%. US consumer price inflation currently stands at 1.7%. (We offer no opinion as to whether US CPI is a fair reflection of US inflation.) On the basis that US “inflation” doesn’t change meaningfully over the next 10 years, US bond investors are going to earn an annualised return just a smidgen above zero percent.

How do US Treasury yields stack up against the longer term trend in interest rates ? The following data are from @Macro_Tourist: 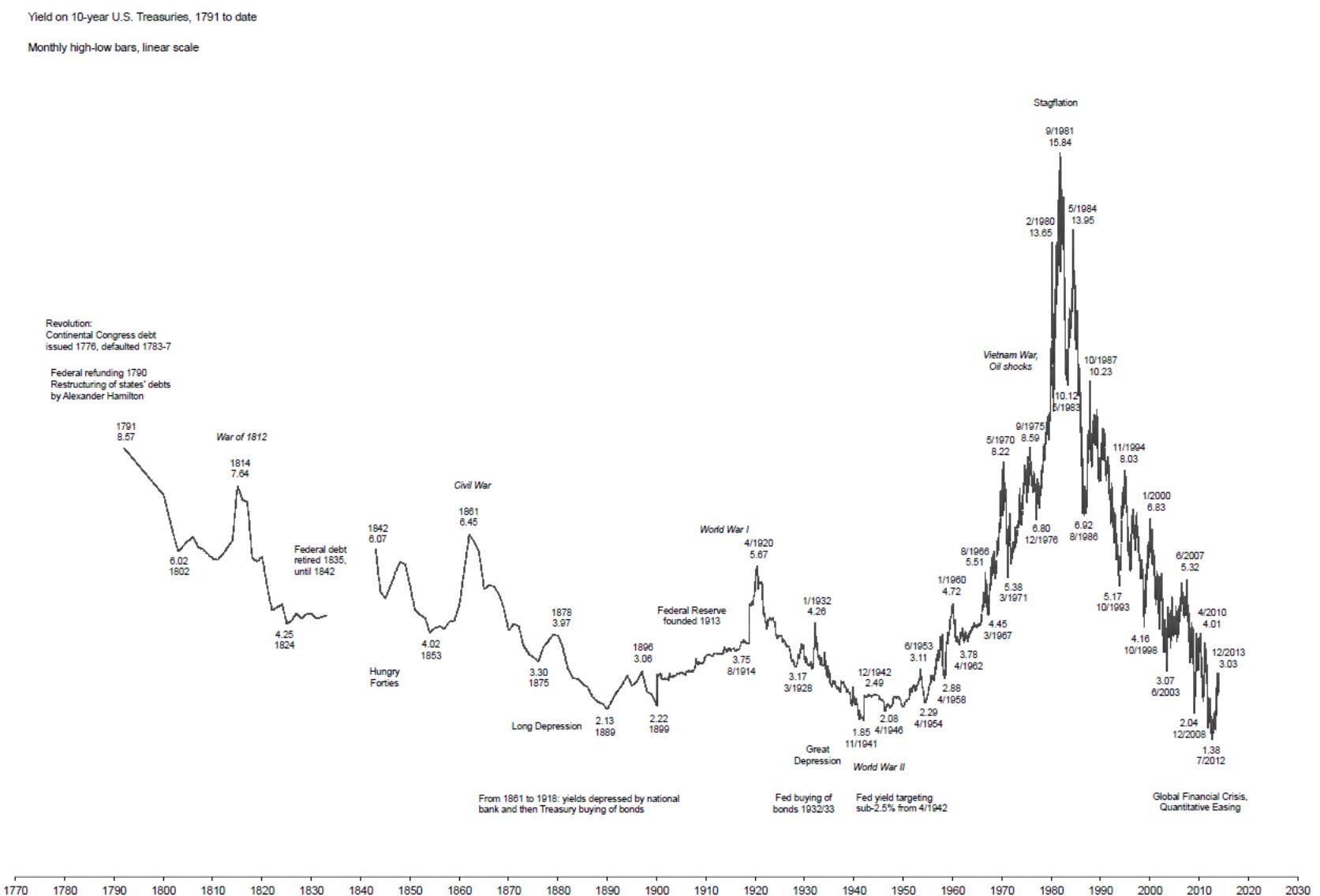 The chart shows the direction of travel for US market rates since independence, given that the Continental Congress defaulted on its debts.

Now it may well be that US Treasury yields have further to fall. As SocGen’s Albert Edwards puts it,

“Our ‘Ice Age’ thesis has long called for sub-1% bond yields and I see this extending to the US and UK in due course.”

As things stand, the trend is with the polar bears. The German bond market has already broken down through the 1% level (10 year Bunds at the time of writing currently trade at 0.98%).

“After the Asian / Russian / LTCM crises of the late 1990s we entered a supercycle of very aggressive policy responses to major global problems. In turn this helped encourage the 2000 equity bubble, the 2007 housing / financial / debt bubble, the 2010-2012 Euro Sovereign crisis and arguably some recent signs of a China credit bubble (a theme we discussed in our 2014 Default Study). At no point have the imbalances been allowed a full free market conclusion. Aggressive intervention has merely pushed the bubble elsewhere. With no obvious areas left to inflate in the private sector, these bubbles have now arguably moved into government and central bank balance sheets with unparalleled intervention and low growth allowing it to coincide with ultra-low bond yields.” [Emphasis ours.]

The French statesman George Clemenceau once commented that war is too important to be left to generals. At this stage in the game one might be tempted to add that monetary policy is far too important to be left to politicians and central bankers. We get by with free markets in all other walks of economic and financial life – why let the price of money itself be dictated by a handful of State-appointed bureaucrats ? We were once told by a fund manager (a Japanese equity manager, to be precise – rare breed that that is now), around the turn of the millennium, that Japan would be the dress rehearsal, and that the rest of the world would be the main event. Again, the volume of the mood music is rising in SocGen’s favour.

We nurse no particular view in relation to how the government bond bubble (for it surely is) plays out – whether yields grind relentlessly lower for some time yet, or whether they burst spectacularly on the back of the overdue return of bond market vigilantes or some other mystical manifestation of long-delayed economic common sense. But Warren Buffett himself once said that,

“If you’ve been playing poker for half an hour and you still don’t know who the patsy is, you’re the patsy.”

The central bank bond market poker game has been in train for a good deal longer than half an hour, and the stakes have never been higher. Sometimes, if you simply can’t fathom the new rules of the game, it’s surely better not to play. So we’re not in the business of chasing US Treasury yields, or Gilt yields, or Bund yields, ever lower – we’ll keep our bond exposure limited to only the highest quality credits yielding the highest possible return. Even then, if Fed tapering does finally dissipate in favour of Fed hiking – stranger things have happened, though we can’t think of any off the top of our head – it will make sense at the appropriate time to eliminate conventional debt instruments from client portfolios almost entirely.

But indexation madness is not limited to the world of bonds. Its malign, unthinking mental slavery has fixed itself upon the equity markets, too. Equity indices, as is widely acknowledged, allocate their largest weights to the largest and most expensive stocks. What’s extraordinary is that even as stock markets have powered ahead, index trackers have enjoyed their highest ever inflows. The latest IMA data show that more UK retail money was put into tracker funds in July than in any other month since records began. We accept the ‘low cost’ aspect of tracker funds and ETFs; we take serious issue with the idea of buying stock markets close to or at their all-time high and being in for any downside ride on a 1:1 basis.

But there is a middle way between the Scylla of bonds at all-time low yields and the Charybdis of stocks at all-time high prices. Value. Seth Klarman of the Baupost Group once wrote as follows:

“Stock market efficiency is an elegant hypothesis that bears quite limited resemblance to the real world. For over half a century, disciples of Benjamin Graham, the intellectual father of value investing, have prospered buying bargains that efficient market theory says should not exist. They take advantage of the short-term, relative performance orientation of other investors. They employ an absolute (not relative) valuation compass, patiently exploiting mispricings while avoiding overpaying for what is popular and trendy. Many are willing to concentrate their exposures, knowing that their few best ideas are better than their hundredth best, and confident in their ability to tell which is which.

“Value investors thrive not by incurring high risk (as financial theory would suggest), but by deliberately avoiding or hedging the risks they identify. While efficient market theorists tell you to calculate the beta of a stock to determine its riskiness, most value investors have never calculated a beta. Efficient market theory advocates moving a portfolio of holdings closer to the efficient frontier. Most value investors have no idea what this is or how they might accomplish such a move. This is because financial market theory may be elegant, but it is not particularly useful in formulating a successful investment strategy.

“If academics espousing the efficient market theory had no influence, their flawed views would make little difference. But, in fact, their thinking is mainstream and millions of investors make their decisions based on the supposition that owning stocks, regardless of valuation and analysis, is safe and reasonable. Academics train hundreds of thousands of students each year, many of whom go to Wall Street and corporate suites espousing these beliefs. Because so many have been taught that outperforming the market is impossible and that stocks are always fairly and efficiently priced, investors have increasingly adopted strategies that eventually will prove both riskier and far less rewarding than they are currently able to comprehend.”

That sounds about right to us. Conventional investing, both in stocks and bonds on an indexed or benchmarked basis, “will prove both riskier and far less rewarding” than many investors are currently able to comprehend.

Written By
Tim Price
More from Tim Price
“Sir, I see Sir Mervyn King has signalled that he no longer...
Read More

3 replies on “A black mark for benchmarks”