Q3 will be the first quarter in which the US officially suffers an earnings recession: two consecutive quarters of declining annual EPS growth despite hundreds of billions in stock buybacks reducing the per share denominator in the EPS calculation. Q4 will not be any better and while EPS are expected to decline one again, it will be the fourth consecutive decline in revenues in the S&P that will be the highlight.

The reasons for this slowdown in both sales and profits are well-known: the surge in the dollar, the slowdown in global trade, the collapse in commodity prices, and the suddenly weak consumer (just look at retail stocks in the past month).

Furthermore, and contrary to conventional wisdom, net income is declining both with and without energy companies. As Socgen notes, Net
reported income is declining not just in energy, but in a variety of other sectors and those who do not yet have negative EPS growth have very low single digit growth numbers. 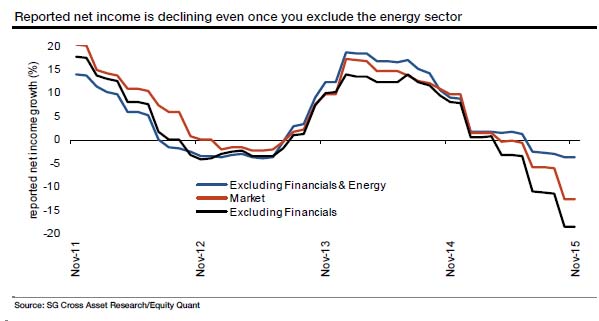 For now the market is oblivious, and has more than made up for the decline in earnings by boosting P/E multiples, but how much longer can this tradeoff continue especially in an environment of rising rates (as Goldman warned earlier).

And, even more importantly, what happens to revenues and profits in 2016? That is the question posed by SocGen’s Andrew Lapthorne who notes that “profits are weaker and largely negative, but can they get worse still?”

His answer, “in many ways yes.”

He notes that not only have historical numbers come in weaker than expected but 2016 forecasts have been cut extensively over the last 12 months. The biggest downgrades have of course been in the Energy and Industrial Metals & Mining sectors. However even beyond these sectors forecasts for next year have been reined in aggressively. There is the odd exception such as Retail (largely down to Amazon) and Health Care, but overall the message is that 2016 is shaping up to be a year of profit decline even excluding the energy sector. 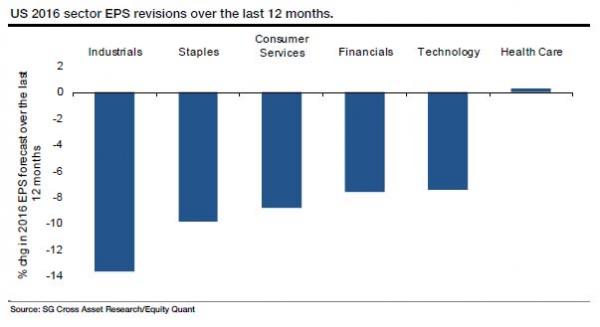 What are the main reasons for the ongoing slide in profitability? Lapthorne explains that, “the strong US dollar and competitive devaluations elsewhere are exerting a mighty toll on US profitability. [Albert Edwards] has been highlighting the downward pressure on US import prices, firstly courtesy of Japan and then the Eurozone and we assume soon the Chinese. Weak US import prices are a killer of US industrial profitability as volumes simply drop off a cliff if you are priced out of a global market and become uncompetitive at home; there is a clear correlation between the relative performance of industrial versus consumer services and US import prices. 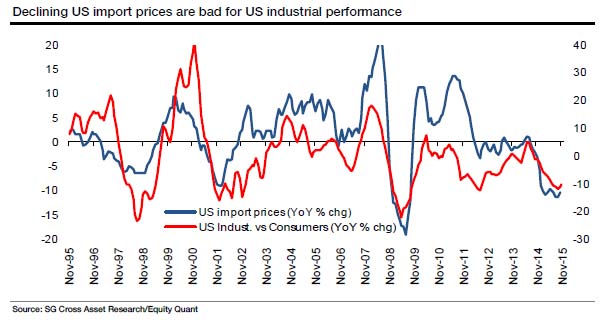 Indeed, as Albert Edwards noted earlier, importing deflation form other devaluing countries is precisely why the world is not only stuck in a “currency war” regime, but one where soon central banks will have to engage in the next step of currency warfare: direct currency intervention.

What is surprising to most is why the Fed has been so slow to notice the impact of plunging import prices and appreciated the recessionary-risk its tightening policies have unleashed. The reason is simple: there is a 1 year lag between declining import prices and profitability.

Changes in US import prices lead profitability by about 12 months, and to that extent without a reversal in the fortunes in the US dollar, a US industrial profit recession looks baked in the cake for 2016. The question is then how much will the US authorities be willing to import everyone else’s deflation (via US dollar strength) and let others steal its sales? Japan of course made the same mistake in the 1990’s and is now desperately trying to reverse the process. 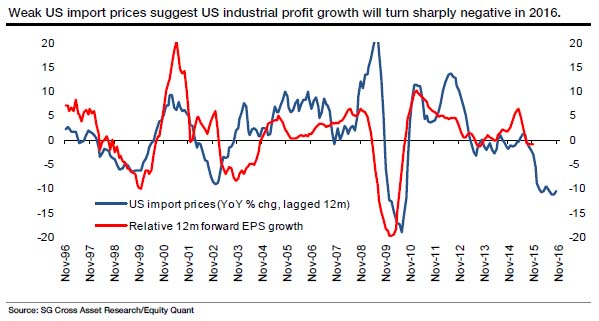 This means that all else equal, even with the benefit of another record year of buybacks, profits should decline as much as 10% in the coming quarters.

But wait, it gets worse: while many have been pointing to the increasing similarities between Europe and Japan, the real alarming comparison is between the US in 2015 and what Japan experienced in the 1990s when the Yen soared from 1990 to 1995, when the USDJPY was cut in half from 160 to 80. Lapthrone again:

As Gerard Minack points out in his really useful “Downunder Daily”, the appreciation in the trade-weighted US real exchange rate in the last couple of years is already similar to what Japan experienced in the 1990s and the resultant collapse in Japanese revenues was a key part of its lost decade. 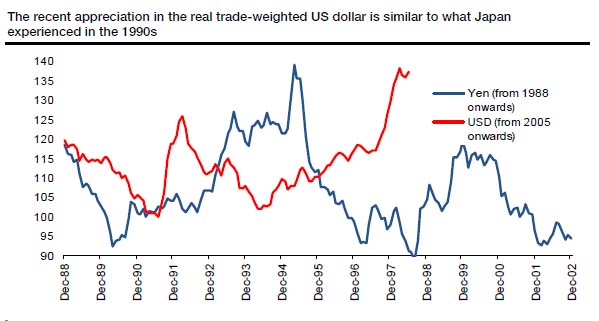 What can potentially sink this theory? Lapthorne notes one curious observation, namely that while the USD rises in the three months preceding a rate hike, the rally then continues for about another 30 days before fizzling out as the market realizes that the Fed’s action sows the seeds of its own destruction and unleashes the very forces that will demand a rate cut in the not very distant future (and if other central banks of the New Normal are any indication, in the immediate future). For a good primer on this look no further than the dramatic pancaking in the Yield curve in recent days, where the drop in long-term yields reeks of Fed “policy error” and suggests the Fed’s attempt to boost inflation will backfire and in fact lead to even more deflation despite rising short-term rates. 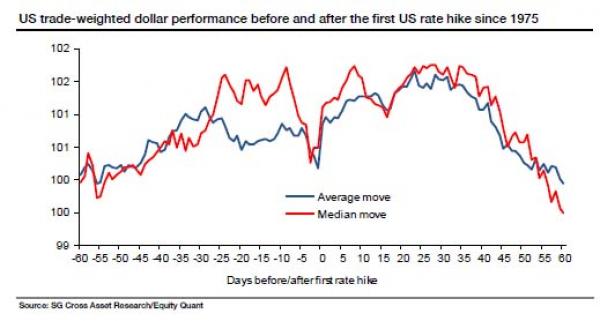 “This historical rule of thumb, courtesy of the Kit Jukes our FX strategist, comes with of course a whole disclaimers’ worth of caveats. The interest rate cycle and the economic cycle have been disconnected for some time. Interesting acronyms such as QE and ZIRP were not invented and around and rate rise cycles have been so rare in the last quarter of a decade that the bulk of our analysis refers back to when Kit was probably doing this kind of analysis on a slide rule. But given the historical evidence and the already damaging impact of a strong US dollar on US profits, is a softer US dollar such an unlikely outcome? US industrials must be hoping so...”

And certainly the Fed, because if what the Fed is about to engage in is a major policy error as the flattening yield curve suggests, with Yellen forced to promptly cut rates in 2016 and perhaps even go negative, that may be the last error the Fed, as a central bank with credibility among “serious economists”, will ever make before it has no choice but to unleash the monetary helicopters.

Written By
Other Writer
More from Other Writer
By Antony P. Mueller The General Concept of Value The value of...
Read More

0 replies on “Zero Hedge: What Will Happen To Corporate Profits If The Fed Hikes In December”