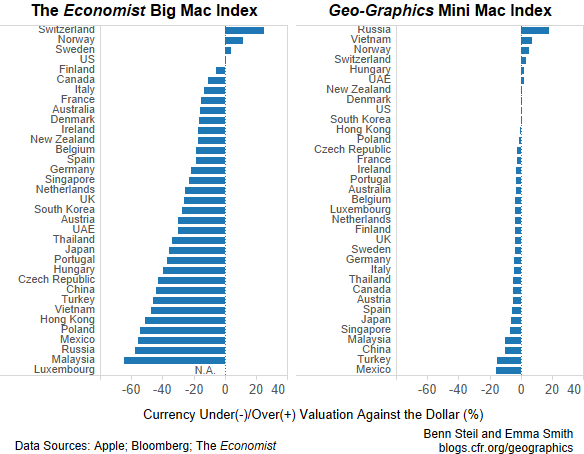 The “law of one price” holds that identical goods should trade for the same price in an efficient market.  But how well does it actually hold internationally? The Economist magazine’s famous Big Mac Index uses the price of McDonald’s Big Macs around the world, expressed in a common currency (U.S. dollars), to measure the extent to which various currencies are over- or under-valued. The Big Mac is a global product, identical across borders, which makes it an interesting one for this purpose.

Big Macs travel badly, however.  Flows of burgers across borders won’t align their prices. So in 2013 we created our own Mini Mac Index that compares the price of iPad minis across countries. Minis are a global product that, unlike Big Macs, can move quickly and cheaply around the world.  As explained in the video below, this helps equalize prices. 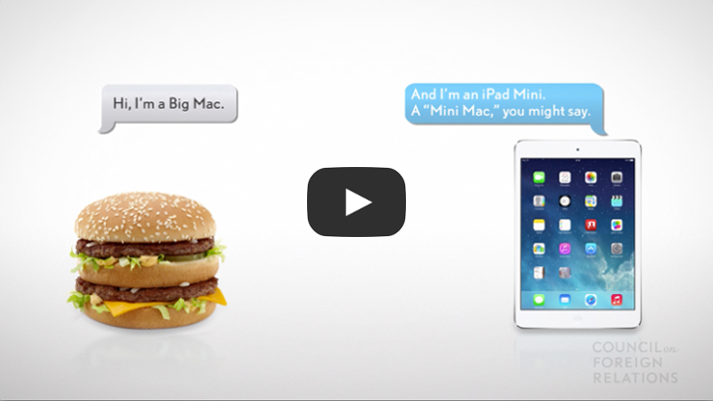 The Mini Mac Index also suggests that the dollar has become less overvalued (down from 7 percent) since July. This is despite a 4½ percent rise in the trade-weighted value of the dollar since Trump’s election.  An increase in the local price of iPad minis in over three-quarters of the countries in our sample offset the impact of a more expensive dollar.  This is what we would expect when the law of one price is at work.

The Mexican peso has taken a pounding since the election.  This is not surprising, given Trump’s pledges to impose import tariffs, re-open NAFTA, and build a wall.  The peso is now 16 percent undervalued according to the Mini Mac Index, up from 9 percent in July.  But the Russian ruble, which has benefited from Trump’s suggestions that sanctions would be cut and relations improved, is now 18 percent overvalued—double what it was in July.  Both currencies should be volatile in the coming months as Trump’s actual policies take form.

Most experts regard consumer’s psychological disposition as the driving force of an economy. If consumers are optimistic and happy with the economy, no recession…