Fed policy makers are of the view that the correct interest rate policy could bring the economy onto a path of economic stability and low price inflation. The idea is to guide interest rates towards what is called the “natural” interest rate. The natural rate is believed to be one that is consistent with stable prices and a balanced economy.

What is required then is that Fed policy makers successfully target the federal funds rate towards this natural interest rate.

The interest rate obtained from the Taylor rule is determined by changes in the price index, the equilibrium real interest rate (which is assumed to be 2%), the difference between price inflation and the inflation target (multiplied by 0.5). The inflation target is assumed to be 2%. Finally, the rule is determined by the output gap expressed in percentage terms. The output gap is the difference between real gross domestic product and potential real gross domestic product (which is also multiplied by 0.5).

Historically the rule has tracked the movements in the federal funds rate rather well (see chart). 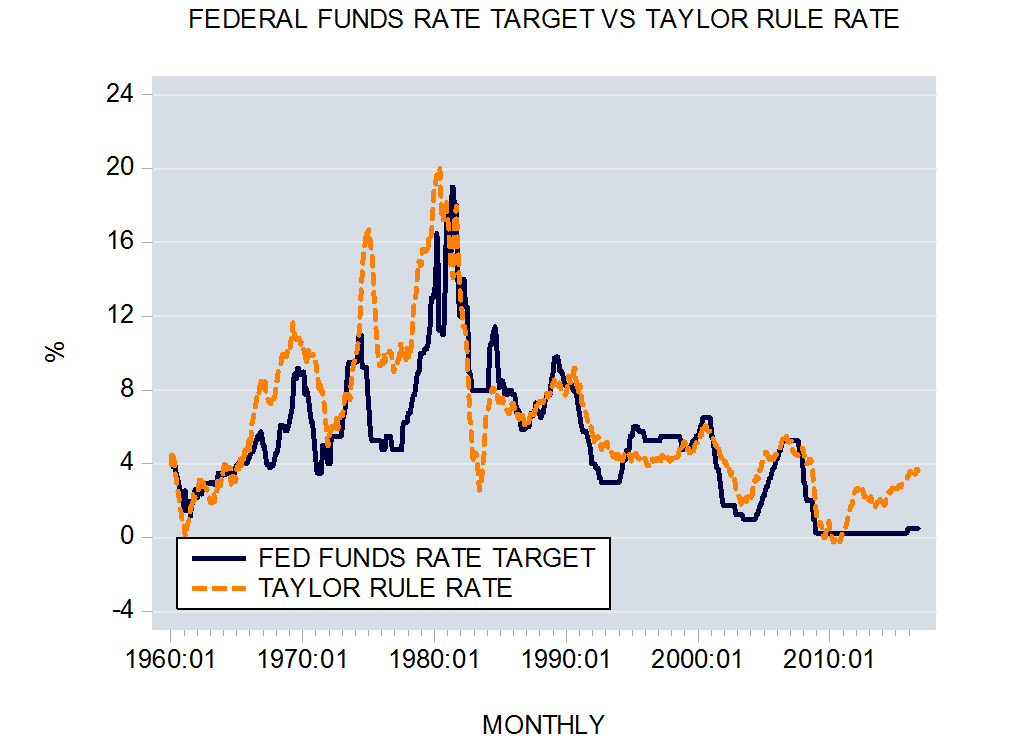 Given the gap of 3.12% between the Taylor rule and the federal funds rate target, it is tempting to suggest that Fed policy makers have been too loose regarding their interest rate policy. (The Federal Funds rate target currently stands at 0.75%).

One could however, argue that the rule is only valid if Fed policy makers are blindly following it, which is never the case.

In remarks prepared for delivery to the Stanford Institute for Economic Policy Research, Federal Reserve Chair Janet Yellen expressed doubts about using a rigid formula to set interest rates. She said the Fed consults a range of policy rules, including one developed by Stanford Professor John Taylor, to guide its decisions on rates. But the Federal Reserve head ruled out an automatic reliance on such rules because they do not provide the necessary flexibility during the occurrence of various shocks.

In her speech, she suggested that the U.S. central bank should continue to raise interest rates slowly to keep jobs plentiful and inflation low. “I consider it prudent to adjust the stance of monetary policy gradually over time.”

Yellen warned that a delay in tightening monetary policy could drive up inflation and force the Fed to raise rates in response, sending the economy into a tailspin that could have been prevented if the rate hikes had been more gradual.

But, she said, it “will not be easy” to find a path of rate hikes that can foster strong jobs growth and 2-percent inflation, given the uncertainties of global growth, slow domestic productivity growth, and a change in fiscal policies, among others.

We suggest that a gradual tightening cannot prevent a subsequent economic bust. Economic busts are simply the inevitable removal of various activities that emerge on the back of loose monetary policy. Such activities grow thanks to that policy and disappear when this distortionary intervention disappears – they simply cannot survive without the continued support of an “accommodating” central bank. The distortions occasioned by these interventions do great harm to the economy – diverting investment away from genuine wealth generating activities.

From this perspective, a tighter monetary stance is in fact a welcome move from the perspective of wealth generators since less wealth is going to be diverted from them towards misallocated activities.

The belief that economic hardship could be avoided by a gradual tightening is naive. A gradual tightening of interest rate will hurt various marginal activities first. After time elapses this is going to spill over to other activities and lead to the decline in bank lending – fractional reserve lending or lending out of “thin air” – which in turn deepens the economic downturn.

A gradual tightening is merely going to delay the process of adjustment, thereby preventing a speedy recovery of the process of real wealth generation and hence of the economy.

In fact, the Greenspan’s Fed had tried the gradual approach, which culminated in a serious recession. Between October 2004 and June 2006, the Fed tightened its interest rate stance by gradually lifting the federal funds rate target from 1.75% in October 2004 to 5.25% by June 2006. Each time the Fed was raising the target in increments of 0.25%.

At that time Chairman Greenspan, similarly to Yellen, was of the view that a gradual tightening would prevent a serious economic bust. In fact, however, this was exactly what we got, when the US economy suffered a massive plunge during 2008 notwithstanding a policy of gradual tightening. 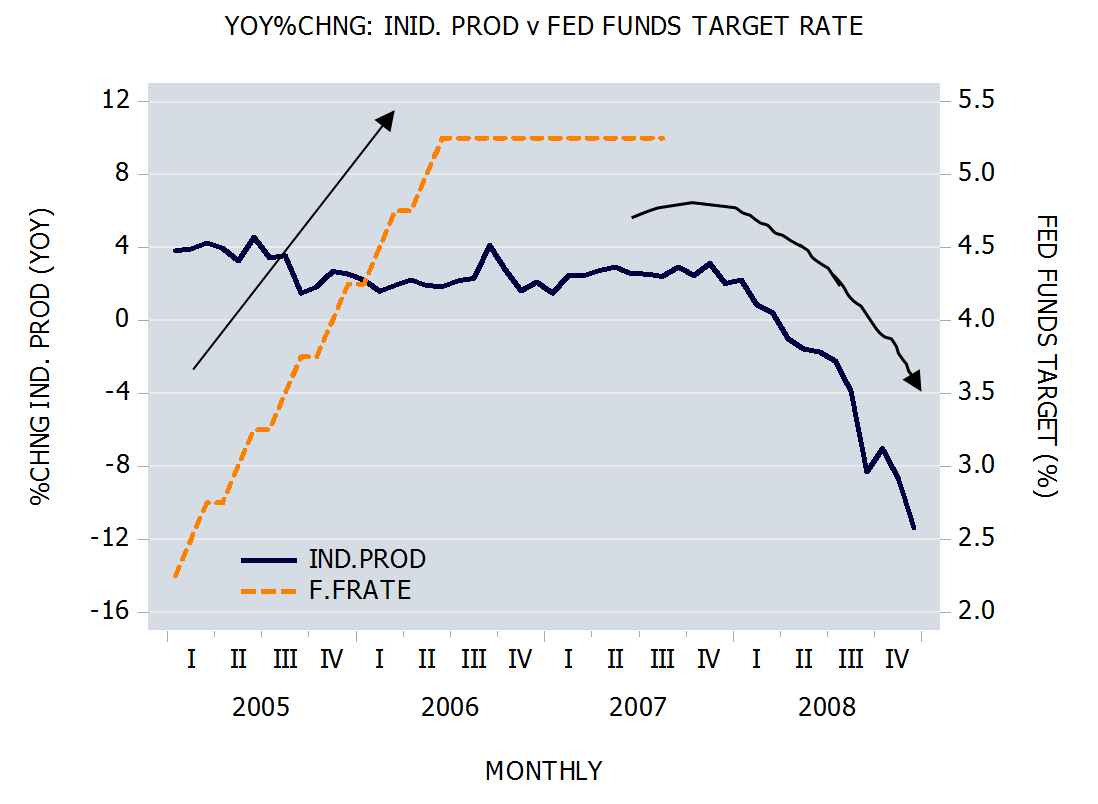 The implication here is clear: the Fed and economic analysts are likely to be wrong here if they believe that the use of the Taylor Rule – or any other rule for that matter – will somehow lessen the risks of an economic downturn pursuant to their tightening.

What various supporters of these “rules” and of other form of market intervention are trying to establish is the “correct” level for the interest rate. This level, however, can only be set in a free unhampered market. Such an interest rate cannot be known without freeing the market from the Fed’s tampering.

At a freely established interest rate the issue of systemic misallocation of resources is not going to emerge, nor will the curse of economic cycles that follow central bank meddling. Obviously businesses are still going to makes errors, however these errors are going to be self-corrected and not of an enduring nature.

For Fed policy makers to be able to establish the “correct” path towards the natural interest rate they have to know individuals time preferences, which however, cannot be established beforehand. One thing we do know however is that any policy that undermines the process of real wealth formation tends to raise individuals’ time preferences – pushing real interest rates higher.

By Ryan McMaken   2016 was supposed to be the year that the Federal Reserve “normalized” its policies. As much as two years ago —…