… from president-elect Trump on the day before his inauguration:

Readers will remember my dear friend Bernard, the Liberty Dollar man and self-confessed convicted counterfeiter who was the victim of an egregious and highly vindictive case of injustice by Uncle Sam: the US government shut him down for minting gold and silver currency that people actually wanted to use instead of depreciating greenbacks.

Bernard got done for undermining the ‘legitimate’ currency of the country. To quote the US Attorney’s gloating victory statement on the day he was wrongly convicted, March 18th 2011:

“Attempts to undermine the legitimate currency of this country are simply a unique form of domestic terrorism” and  “represent a clear and present danger to the economic stability of this country.”

This must surely go down as one of dumbest claims ever made by a prosecutor in the history of American jurisprudence.

Unlike any other terrorist ever, Bernard used no violence at all. He just offered people choice of currency and they liked it.

As Bernard himself observed, likening him to a terrorist was absurd: “This is the United States government,” he told the New York Times. “It has nuclear weapons, and it’s worried about some ex-surfer guy making his own money? Give me a break.”

When he was convicted he was facing the prospect of spending the rest of his life in a federal slammer. Fortunately, the judge was lenient and Bernard ended up getting 6 months’ house arrest and 3 years’ probation.

So Riddle Me This, Uncle Sam: if undermining the legitimate currency of the United States is a crime, then why isn’t the Fed in jail: since the Fed was founded, the US dollar has lost 95.9% of its value thanks to Federal Reserve monetary policy.

If that is not undermining the currency, then tell me what is.

And if counterfeit is a crime, why isn’t the producer of this fairly obvious counterfeit dollar not in jail?

Here is a photo of Bernard, Larry White and me at the Cato Monetary Conference in November 2014: 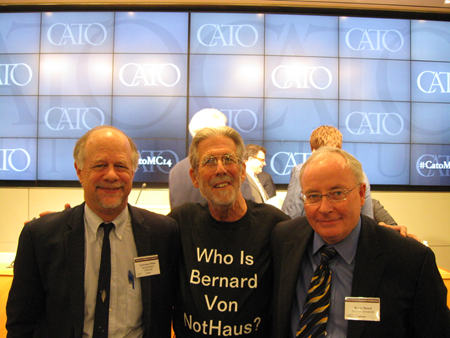 You can probably guess which one Bernard is.

Bernard is a damn good minter but a bloody awful counterfeiter: apparently, he tried to counterfeit official nickel and paper currency by issuing coins consisting of gold and silver. He made no effort to make his coins look like official currency either – indeed, he went out of his way to make them look different. Just look at this one, for example: 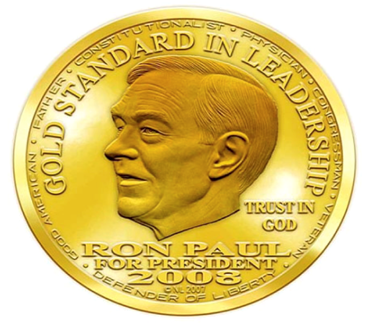 Now does that look like a greenback to you?

Despite its ineptitude as a counterfeit operation, the Liberty Dollar was a highly successful business: up to about $85 million worth of Liberty Dollars were issued to about a quarter of a million customers. It was doing just great until the Feds shut it down and seized everything, including holdings of Liberty Dollars that were owned by ordinary people.

Well, it now appears that Bernard is up to his old tricks again:

Good luck with the new counterfeiting business but do try to stay out of jail.