It is the exorbitant privilege of the United States that it can conjure the world’s primary reserve currency, Valéry Giscard d’Estaing, then French finance minister and later president, remarked half a century ago. This privilege, maintained as the dollar took the place of gold, allows the United States to be deeply indebted to the rest of the world while earning far more income abroad than it pays out in interest. Less well known is the mirror image of the exorbitant privilege, what we call the exorbitant detriment. It is, not surprisingly, borne by the world’s largest holder of U.S. debt: China.

Having run persistent current account deficits since the early 1990s, the United States has accumulated a net debt to the world of $7.8 trillion. China, by contrast, is the world’s largest net creditor, to the tune of $1.7 trillion. We would expect countries that are net debtors to pay out more income than they receive, and those that are net creditors to earn more income than they receive—and, indeed, this holds for most of the world. But for the United States and China, the opposite is true. Despite its vast debt, the United States earned $180 billion more in foreign investment income over the year to September 2016 than foreigners earned on U.S. investments. China, on the other side, paid out $50 billion more to foreigners than it received.

The unique financial position of the United States can be explained by the willingness of foreigners to accept a trivial return to hold dollar-denominated assets. China’s exorbitant detriment is, to some extent, the price it bears for being on the other side of this transaction. Foreign exchange reserves account for half of China’s foreign assets, of which around 40 percent are invested in low-yielding U.S. Treasury securities, making China the world’s largest holder of dollar-denominated central bank reserves.

But China’s negative net foreign investment income also reflects the fact that it is lending to the rest of the world at risibly low rates. Chinese government institutions lend far more cheaply than alternative lenders to domestic, as well as foreign, firms operating abroad. This reflects the government’s efforts both to subsidize its companies and to strengthen economic ties with resource-rich countries in, for example, Africa and Latin America.

Can China continue supporting its exorbitant detriment indefinitely? Not if it wants to prioritize a halt to reserve sales, which have been necessitated by capital fleeing China on expectations of continued renminbi depreciation amid weakening economic growth. Rather than letting the renminbi fall in response to outflows, Chinese officials have been selling reserves to stem the pace of depreciation. Unlike those of previous periods, this intervention favors the United States by making the dollar more competitive. Nonetheless, President Donald Trump has threatened to declare China a currency manipulator. If China were to respond by letting the renminbi float freely, he would be in for a rude surprise: The currency would likely plummet, not rise.

As a result of China’s intervention, its foreign currency reserves are down almost $1 trillion from their mid-2014 peak, with $156 billion sold just in the past three months. At $3 trillion, China’s reserve stockpile is still by far the largest in the world. But according to the International Monetary Fund’s framework for reserve adequacy, China needs to hold between $1.8 and $2.7 trillion to safeguard against a balance of payments crisis. Should outflows continue at the pace seen over the last three months, China’s reserves will fall to dangerously low levels by summer. 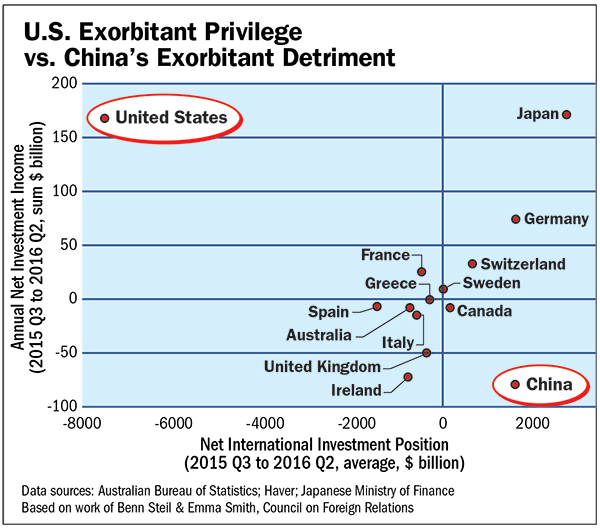 China could hold on to more of its reserves by demanding higher returns on its lending abroad. How much officials need to sell to hold the renminbi steady is determined by the gap between China’s current account surplus—that is, the income it receives from abroad—and the amount of capital leaving the country. China runs a large current account surplus thanks to income from its exports. But negative net investment income reduces the surplus. If China’s investment income had been just zero over the year to September 2016, the country could, all else being equal, have kept $50 billion more of its reserves (selling $270 billion rather than $320 billion).

Raising the interest rates China charges on overseas lending is, however, not without costs. China would have to stop subsidizing its companies in order to win foreign contracts, as well as its efforts aimed at putting dollars to the service of geostrategic objectives. In short, it would mean China behaving more like a mature developed country. For China and the world, this is the better path for it to take. It would eliminate a source of both financial instability and political friction.

Written By
Other Writer
More from Other Writer
by Alvaro Martin  Looking at the current situation, one can easily perceive...
Read More

One reply on “Benn Steil: Of Debt and Detriment”