Not waving but drowning – Stocks, debt and inflation?

The recent decline in the US stock market, after the longest bull-market in history, has prompted many commentators to focus on the negative factors which could sow the seeds of the next recession. Among the main concerns is the inexorable rise in debt since the great financial recession (GFR) of 2008. According to May 2018 data from the IMF, global debt now stands at $63trln, with emerging economy debt expansion, over the last decade, more than offsetting the marking time among developed nations. The IMF – Global Debt Database: Methodology and Sources WP/18/111 – looks at the topic in more detail.

The title of this week’s Macro letter comes from the poet Stevie Smith: –

I was much further out than you thought

And not waving but drowning.

It seems an appropriate metaphor for valuation and leverage in asset markets. In 2013 Thomas Pickety published ‘Capital in the 21st Century’ in which he observed that income inequality was rising due to the higher return on unearned income relative to labour. He and his co-authors gathering together one of the longest historical data-set on interest rates and wages – an incredible achievement. Their conclusion was that the average return on capital had been roughly 5% over the very long run.

This is not the place to argue about the pros and cons of Pickety’s conclusions, suffice to say that, during the last 50 years, inflation indices have tended to understate what most of us regard as our own personal inflation rate, whilst the yield offered by government bonds has been insufficient to match the increase in our cost of living. The real rate of return on capital has diminished in the inflationary, modern era. Looked at from another perspective, our current fiat money and taxation system encourages borrowing rather than lending, both by households, corporates, for whom repayment is still an objective: and governments, for whom it is not.

Financial innovation and deregulation has helped to oil the wheels of industry, making it easier to service or reschedule debt today than in the past. The depth of secondary capital markets has made it easier to raise debt (and indeed equity) capital than at any time in history. These financial markets are underpinned by central banks which control interest rates. Since the GFR interest rates have been held at exceptionally low levels, helping to stimulate credit growth, however, that which is not seen, as Bastiat might have put it, is the effect that this credit expansion has had on the global economy. It has led to a vast misallocation of capital. Companies which would, in an unencumbered interest rate environment, have been forced into liquidation, are still able to borrow and continue operating; their inferior products flood the market place crowding out the market for new innovative products. New companies are confronted by unfair competition from incumbent firms. Where there should be a gap in the market, it simply does not exist. At a national and international level, productivity slows and the trend rate of GDP growth declines.

We are too far out at sea and have been for decades. Markets are never permitted to clear, during economic downturns, because the short-term pain of recessions is alleviated by the rapid lowering of official interest rates, prolonging the misallocation of capital and encouraging new borrowing via debt – often simply to retire equity capital and increase leverage. The price of money should be a determinant of the value of an investment, but when interest rates are held at an artificially low rate for a protracted period, the outcome is massively sub-optimal. Equity is replaced by debt, leverage increases, zombie companies limp on and, notwithstanding the number of technology start-ups seen during the past decade, innovation is crushed before it has even begun.

In an unencumbered market with near price stability, as was the case prior to the recent inflationary, fiat currency era, I suspect, the rate of return on capital would be approximately 5%. On that point, Pickety and I are in general agreement. Today, markets are as far from unencumbered as they have been at any time since the breakdown of the Bretton Woods agreement in 1971.

With US 10yr bond yields now above 3%, stocks are becoming less attractive, but until real-yields on bonds reach at least 3% they still offer little value – US CPI was at 2.9% as recently as August. Meanwhile higher oil prices, import tariffs and wage inflation all bode ill for US inflation. Nonetheless, demand for US Treasuries remains robust while real-yields, even using the 2.3% CPI data for September, are still exceptionally low by historic standards. See the chart below which traces the US CPI (LHS) and US 10yr yields (RHS) since 1971. Equities remain a better bet from a total return perspective: – 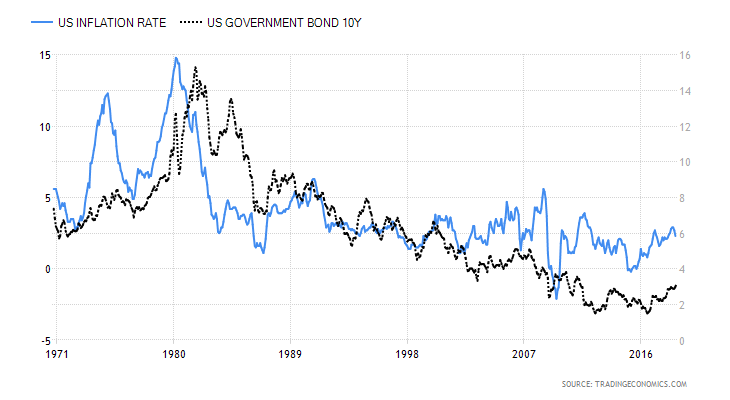 What could change sentiment, among other factors, is a dramatic rise in the US$, an escalation in the trade-war with China, or a further increase in the price of oil. From a technical perspective the recent weakness in stocks looks likely to continue. A test of the February lows may be seen before the year has run its course. Already around ¾ of the stocks in the S&P 500 have suffered a 10% plus correction – this decline is broad-based.

Many international markets have already moved into bear territory (declining more than 20% from their highs) but the expression, ‘when the US sneezes the world catches a cold,’ implies that these markets may fall less steeply, in a US stock downturn, but they will be hard-pressed to ignore the direction of the US equity market.

Rumours abound of another US tax cut. Federal Reserve Chairman, Powell, has been openly criticised by President Trump; whilst this may not cause the FOMC to reverse their tightening, they will want to avoid going down in history as the committee that precipitated an end to Federal Reserve independence.

There is a greater than 50% chance that the S&P 500 will decline further. Wednesday’s low was 2652. The largest one month correction this year is still that which occurred in February (303 points). We are not far away, however, a move below 2637 will fuel fears. I believe it is a breakdown through the February low, of 2533, which will prompt a more aggressive global move out of risk assets. The narrower Dow Jones Industrials has actually broken to new lows for the year and the NASDAQ suffered its largest one day decline in seven years this week.

A close below 2352 for the S&P 500 would constitute a 20% correction – a technical bear-market. If the market retraces to the 2016 low (1810) the correction will be 38% – did someone say, ‘Fibonacci’ – if we reach that point the US Treasury yield curve will probably be close to an inversion: and from a very low level of absolute rates. Last week the FRBSF – The Slope of the Yield Curve and the Near-Term Outlook – analysed the recession predicting power of the shape of the yield curve, they appear unconcerned at present, but then the current slope is more than 80bp positive.

If the stock correction reaches the 2016 lows, a rapid reversal of Federal Reserve policy will be required to avoid accusations that the Fed deliberately engineered the disaster. I envisage the Fed calling upon other central banks to render assistance via another concert party of quantitative, perhaps backed up by qualitative, easing.

At this point, I believe the US stock market is consolidating, an immanent crash is not on the horizon. The GFR is still too fresh in our collective minds for history to repeat. Longer term, however, the situation looks dire – history may not repeat but it tends to rhyme. Among the principal problems back in 2008 was an excess of debt, today the level of indebtedness is even greater…

We are much further out than we thought,

And not waving but drowning.

Written By
Colin Lloyd
More from Colin Lloyd
The risk that the Sino-US trade war morphs into an international currency...
Read More

0 replies on “Not waving but drowning – Stocks, debt and inflation?”