Believe it or not, one of the topics in economics that confuses macroeconomists is the actual role of interest rates.

For the most part they just assume that an interest rate is the cost of money, the price of money, or even the transfer of the fruits of production from producers to idle capitalists. This last assumption appears to have been Keynes’s motivation for his dislike of savers, or rentiers as he disparagingly labelled them. The thought that workers slave for a master who then pays interest to capitalists energises Marxism as well.

In a free market, consumption comes in two basic forms: that which is consumed today, and that which is postponed into the future. Deferred consumption is saving, and Keynes’s target was the saver, even “looking forward to the rentier’s euthanasia” as he put it in his General Theory.

Denying Say’s Law or the law of the markets allowed Keynes, in his own mind anyway, to replace the saver with the state as the principal source of funding for industrial investment. That he came to this conclusion can only be the result of moral principles unsupported by reasoned theory. But once you launch yourself down what amounts to the slipway of prejudice, there is no knowing where it will all end. In Keynes’s case, it produced a following which has become the mainspring of today’s macroeconomic mainstream. We play this down, commonly saying that the reason for discouraging saving is to encourage current consumption. This is an error, and everyone who utters this knows or should know it. All Keynes’s work, from his Tract on Monetary Reform onwards hints at his true desire, to eliminate idle savers as an economic factor.

Central to his argument was that the cost of interest is a part of the surplus of production, alongside profit. If you cause the rewards to idle savers to fall, he reasoned there would be more profit for the working entrepreneur. However, while interest is a business cost, it’s value does not arise from business per se; its origin is the value humans put on the difference between something possessed compared with the same thing promised at a future date, which in turn reflects the relative preference consumers express between current consumption and saving.

There are a number of elements to any interest rate, which is how this relative preference is expressed. The Austrian economist, Ludwig von Mises, coined the term “originary interest” for the underlying temporal difference between actual possession and a loan contract guaranteeing future possession. Originary interest is an expression of the discounted time-preference between today and a date in the future, annualised for convenience.

The concept of time-preference is alien to most economists today, but it has a long history. It was used by Conrad Summenhart in 1499 to defend the purchase of discounted debt against Catholic usury laws, pointing out that both borrower and lender would only enter into a loan contract willingly. In the eighteenth century the French statesman, Turgot, asked “why are borrowers willing to pay an interest premium for the use of money? The focus should not be on the amount of metal [i.e. money] repaid but on the usefulness of the money to the lender and borrower.” In particular, Turgot compares the “difference in usefulness which exists at the date of borrowing between a sum currently owned and an equal sum which is to be received at a distant date.”*

The point is that time preference is a perfectly natural human-derived value, as opposed to a usurious sum extracted by capitalistic savers from hard-working producers. That Keynes was spectacularly wrong to attack savers is confirmed by Gibson’s paradox, which showed that interest rates conformed to the general price level, not the rate of inflation as commonly supposed.

The evidence from Gibson’s paradox is supported by Austrian business cycle theory. Consumers set prices for goods through their relative preferences for money. If they shift their preference in favour of goods and away from money, the price level of goods rises. The lower preference for money means less savings are available for investment in production, so the originary interest rate rises to a level determined by preference for goods. Conversely, if consumers increase their preference for money relative to goods, they drive up the purchasing power of money, leading to lower prices for goods and services. In this case, falling prices are accompanied by an increased supply of savings, reflected in falling interest rates. This is how the preference of goods relative to money sets the interest rate and the price level. This is why it is a value derived from changes in human preferences and not production cost considerations.

An obvious precondition for Gibson’s paradox is free markets, though the inherent capacity for the free market to adjust to prevailing conditions permits a degree of state meddling to be tolerated. But there does come a point where state intervention causes the relationship to break down. A state-engineered rise in interest rates to the point where companies abandon investment plans and seek to reverse existing ones marks the top of every credit cycle. And in every cycle the interest rate peak is lower than the previous one, as shown in the chart below of US one-year bond yields. 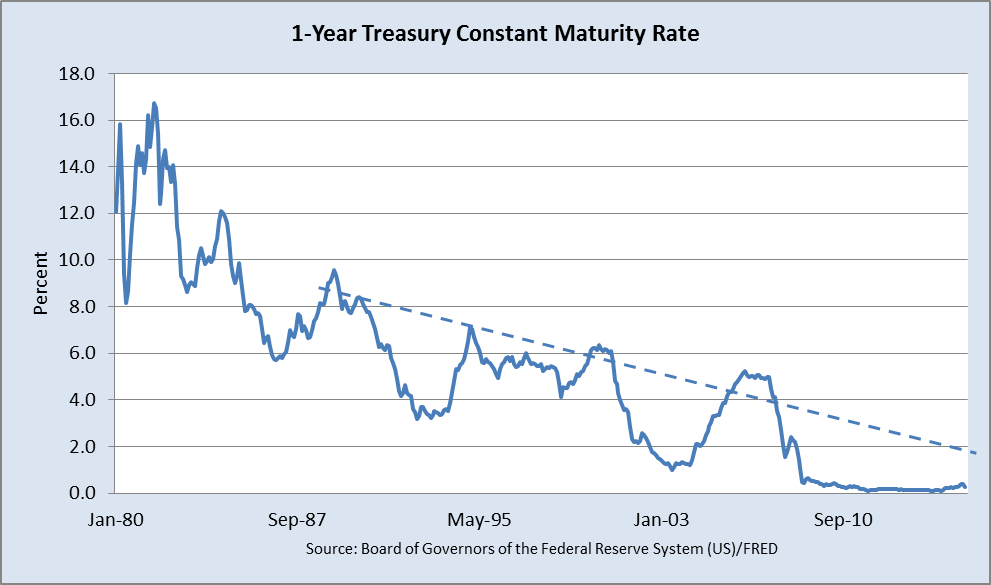 The reason for a trend of declining interest rate peaks is that malinvestments from the previous cycle’s expansion of credit are only partially unwound, because central banks respond to the downturn by swiftly lowering interest rates and expanding the money supply to prevent widespread bankruptcies and unemployment. The result is a legacy of an accumulation of debt that increases with every credit cycle, the consequence being that successively lower levels of interest rates will trigger a slump in business activity.
The descending peaks are on an approximate trend shown by the dotted line, which suggests only a small rise in US interest rates of one or two per cent could trigger the next slump. Small and medium size companies pay overdraft interest rates well in excess of the level indicated by this trend line, and marginally profitable businesses are already struggling to survive.

We are living with the failure of Keynesian-inspired attempts to discard savers and for the state to manage the business cycle. Zero interest rates, coupled with state direction through regulation, have both destroyed the recycling of savings into productive investment, and restricted the activities of the entrepreneurs who have become over-burdened with unrepayable debt. Neo-classical economists and the governments they advise have been so strongly welded to fallacious economic theories that a complete reset in the role between the state and markets is now required. Nothing less will suffice.

*As quoted in The Pure Time-Preference Theory of Interest, published by the Mises Institute, 2011

Via FT.com / UK – Equities surge as UK economy shrinks. The stock market surged higher for the tenth day in a row on…