And so the beat goes on.

Etatiste Nobel winner Stiglitz rails that ‘austerity’ (wherever THAT is being practised) is an economic ‘disaster’; étatiste Nobel Prize winner Krugman warns that we are repeating the ‘mistakes of 1938’ by withdrawing stimulus prematurely; étatiste Nobel winner (anyone would think there was a bias here) Obama trails a nakedly opportunistic package of tax shuffles (whose cuts may be funded by rises on, e.g., energy companies) and infrastructure boondoggles ahead of a lost-looking election; étatiste (non-enNobeled) journo Wolf wistfully looks forward to a domestic German credit boom (i.e., another housing bubble), and our favourite swivel-eyed, étatiste doom-monger in the Telegraph unleashes a harangue on the ‘dangerous defeatism’ evident in a US ‘elite’ still reluctant to man the printing press again.

‘Damn the rest of the world if they (sic) object,‘ he fulminates. ’They have been free-loading off the US for too long!’

As we wrote last week, as far as the nomenklatura is concerned, no stimulus is so big that its evident (and largely foreseeable) failure to promote the re-ordering of misallocated capital and to accelerate the retraining mis-skilled workers – i.e., to enhance the healing process needed for a monetarily-misdirected economy – can not be trotted out as an argument to do more of the same – to intervene à outrance, as their evil Daemon once termed it, from the comfort of his Bloomsbury lodgings.

Such a wilful perversion of the truth and such stubborn blindness to contradictory evidence leads us to think that perhaps the only doodling in history to rival the ISLM diagram for its encapsulation of false logic, Lysenkoism, and intellectual pandering to the State is Michael Mann’s damnable Hockey Stick!

As an alternative to this drone of under-consumptionists, we could cite the following snippet, lifted from a later reference to the 1980 annual conference of the History of Economics Society, which neatly sums up a lesson learned long ago by our forefathers, but discarded in favour of the specious calculus of Keynesianism since then:

The English and French governments learned from the South Sea Bubble and Mississippi Bubble, following the previous quarter century of warfare, that the only remedy was to lower taxation by reductions of military spending [then the single biggest outlay by Leviathan]. Such a remedy would permit the capital accumulation necessary to increased industrialization.

Meanwhile, there seems to be some confusion over just whom the Fed has helped and over whether or not its ‘creditism’ has kept money in circulation at a time of contracting private sector bank liabilities, with some charging that by ‘buying from the banks’, no-one else has been able to sup from this supposed Spring of Life. To our mind, this is to confuse the mechanics of the Fed’s debt buying (conducted perforce with its institutional counterparts in the market) with the wider consequence of its monetization of a large block of both de jure and de facto government debt.

In fact, if we take the five quarters from the end of 2008 (when the Panic was at its height) to the end of March this year (by which time Fed security purchases were being frozen), the following facts emerge:-

The US Treasury issued a net new $1.9 trillion in securities of which:-

(NB: the latter two categories include the effects of their pro rata ownership of assets included in money market & other mutual funds)

So, while the Fed clearly competed with others in taking up the huge new slew of supply, it is hard to argue that it did this by placing the newly-minted proceeds directly and exclusively in the hands of banks, especially since these were themselves happily adding to their holdings of a zero risk-weighted, remunerative asset in a positive yield curve/falling rate environment.
If we now turn to the programme of absorbing Agency and MBS debt, matters become much clearer. Here, the stock of such paper actually fell by $392 billion over our reference period as housing continued to contract. This time:-

It is therefore glaringly obvious that though the Fed may have conducted a good deal of spread-earning business with its cabal of banks and brokers, it also doled out an enormous pool of money to the public-at-large, as was its avowed intention.

We cannot end there, however, for money is nothing if not fungible. The first step to constructing a more comprehensive view should be to add these two operations together. Now, it can easily be argued that households undertook a rather sizeable asset switch, turning almost $1/2 trillion of claims against the troubled GSEs into the direct obligations of Uncle Sam and, in doing so, left themselves with only $225 billion in new Fed money of which to dispose (which immediately begs the question of what the US Treasury did with its receipts, and so on, and so forth…)

Looking further down the list of their holdings, we find that the sum of money (cash & demand deposits) and quasi-money (time and savings deposits) rose by $130 billion so that much, for now, has stayed put within the sector, if not necessarily in any given individual’s pocketbook for any length of time. The remainder (some $100 bln), together with money saved from income, seems to have gone toward paying down liabilities (especially mortgages, to the tune of $260 bln). Is this the dreaded ‘deleveraging’? Certainly. But who can argue with a straight face that this is not a part of the cure which we should encourage to proceed faster, not the symptom of a disease we should try to hold in check?

Incidentally, that augmentation of bank money could be thought of as providing the funding for those same banks’ roughly equivalent increases in UST & Agency purchases, meaning they did not ‘lie idle’ even if it implies that those still able to save are not building up any substantive kind of nest-egg or ‘rainy-day’ reserve, but merely financing the welfare payments handed out to be spent by their ailing corporate and individual neighbours, as well as to foot the wage bill of the relatively sheltered souls who are engaged by the State to do the handing out on its behalf.

Once again this shows that it is not the phantom of ‘liquidity preference’ we need to fear, but the very real phenomenon of capital consumption.

That aside, an even more dramatic development was to be found taking place among non-financial corporate balance sheets over these same five quarters. This time, money holdings can be seen to have risen by $265 bln and near-money ones by $210 (partly offset by a $75 billion combined drop on the books of non-corporate businesses, a real-estate/construction heavy sector clearly still struggling to hold its own).

On the face of it, this $475 billion quasi-money ‘hoard’ in the hands of the nation’s corporates partly absolves the Fed from the charge of failing to inflate properly, but instead seems to add weight to the case of those who bring up the hoary old bogie of the ‘liquidity’ trap.

Don’t forget, however that somebody, somewhere, always has to hold whatever money and near money is in existence and that the fact the Feds clock you on camera putting it in your till says nothing about the avidity with which you will relieve yourself of it once the official bean counters move on to their next act of snooping.

Thus, the fact that more of what is, after all, the medium of circulation has been found in the hands of those who also generate the bulk of the nation’s $33 trillion odd of annual transactions – and who may temporarily be using fewer money substitutes to conduct them, in these straitened times – is not necessarily a bad thing. For a start, at least $100 billion in inventories (depending on which of several official estimates you use) have been usefully realized as part of this total, as have perhaps $50 billion in accounts receivable.

Moreover, corporates, as a class, have not been ‘deleveraging’ – or, more accurately, paying down much in the way of debt, since they have clearly been taking steps to reduce operational gearing. On balance, liabilities have continued to rise, masking both the usual ESOP equity-to-debt anti-dilution scam and a more opportunistic change of emphasis away from bank finance and CP funding to a greater reliance on longer-term bond issuance. Additionally, FDI has also been strong; all of which is to say that some of that increase in corporate ‘liquidity’ has been transferred in from people successfully seeking to reduce their own holdings of the stuff – people who, moreover, have a clear vested interest in seeing those to whom they have entrusted it put it to lucrative employment rather than letting it sit festering passively in a bank account backed with a sterile Federal Reserve credit. 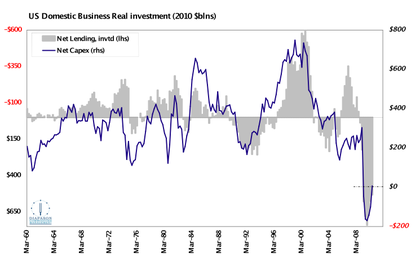 One thing that, incontrovertibly, has been lacking in that regard is physical investment. No, we want no spurious ‘multipliers’ creeping in here, but, nonetheless, net new investment does represent a capital deepening and hence holds out the hope of sustainably higher real wages in future. The fact that this crucial measure recently plumbed depths not seen in at least the last fifty years (falling uniquely behind estimated depreciation schedules) is one reason why some corporates have simultaneously managed to build up their near-cash position: the reduction in payroll they have undertaken is another.

Such prudence, however, cannot persist indefinitely if a competitive stance is to be maintained and, indeed, the evidence is that the tide has begun to turn over the past twelve months – understandable entrepreneurial uncertainty, notwithstanding.

Given, too, that capex is not only one man’s (largely unexpensed) outlay, but another’s top-line revenue, the rise in both aggregate sales and aggregate profits reported over the year is suggestive of the fact that firms’ capital means (including their increased monetary assets) were being put to work on an increasing scale, even if there was still a long way to go before anything of the intensity of the Boom could again be attained.

At least, that was arguably the case up to the start of the summer and the hints of a renewed pause which was ushered in along with its first swallows. Whether that deceleration passes, persists, or degenerates into something more worrisome, is, of course, the burning issue of the moment.

One thing that is certain is that while both individuals and private businesses have spent the last two years reducing the large net borrowing position they had built up over the previous two cycles by a round $1 trillion each, good ol’ Uncle Sam has been swelling his promises to pay to the tune of a cool $3.1 trillion.

And who has been taking up the slack? Well, everyone else in the world, naturally, as the equal and opposite size of the cumulative current account deficit makes plain.

And the main agents in this ‘recycling’ of the ‘deficit without tears’? Correct again: those kindly foreign central banks which have effectively financed $8.50 out of every $10 of US imports, or $1 out of every $5.50 of contemporary retail sales. 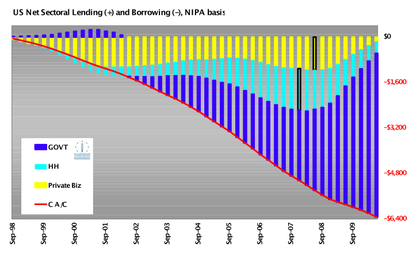 In conclusion, note that, had the US government NOT expanded its outlays based upon the false reasoning of the worthy gentlemen with whose opinions we started this piece, the painful, but largely necessary contraction in private credit would have gone a long way toward restoring that illusive ‘balance’ everyone seeks so avidly in international trade flows. The simultaneous hit to the exporters would also have been hard to bear, but would have taught them to reduce their over-reliance on deadbeat customers in future – not an unmitigated evil, one presumes. Ahh, well – maybe next time…

This week an article in Euromoney points out that liquidity in bond markets is drying up. The blame is laid at the door of regulations designed…