There must be a universal speech template included in the monetary textbook that is shared among the various central banks. On September 28, 2015, Haruhiko Kuroda, Governor of the Bank of Japan, delivered a speech that wasn’t just similar to the press conference Janet Yellen had endured only a week or so before, it was a close enough replica that if stripped of geographic references would have made it impossible to determine who was giving the speech. Kuroda did as Yellen did, making a specific point to emphasize how “robust” the Japanese economy was showing itself in 2015 before trying his best to explain away all the ways in which it was not.

Saying, “First, domestic private demand has continued to be robust” Kuroda then listed factors that were only slightly related to “domestic demand.” Rather than find specific economic accounts performing as he suggested, the Governor was instead reliant on surveys. “Firms’ positive fixed investment stance could be confirmed by various survey results.”

For Japanese households, Kuroda followed as his American counterparts by leading with the declining unemployment rate, assuming its validity and meaningfulness, and then trying to explain why household spending (demand) wasn’t following all that.

In terms of household spending, private consumption is somewhat sluggish recently, reflecting bad weather in the April-June quarter. Nevertheless, as the employment and income situation has continued with its steady improvement and consumer sentiment is on an improving trend, private consumption seems to have remained resilient on the whole.

Consumer “demand” remains “robust” except that it is easily distracted by Japanese weather (obviously not the same storms and snow apparently afflicting the US in the quarter before) and can only charitably be described as “resilient.” As nice as all that may sound, couched carefully as always improving, it doesn’t quite explain the steady and growing chorus expecting and now demanding still more QQE.

Some of that is surely the “unexpected” detour of Japan’s export sector. As in the US, the Bank of Japan is blaming these unspecified “overseas” factors for the deviation in what was supposed to be building export momentum (though, it needs to be pointed out, the Bank of Japan makes no distinction about nominal growth due to the yen, leaving much illusory gains as if they were actual volume advances).

Exports had increased for three quarters in a row since the July-September quarter of 2014, but have recently been more or less flat, due mainly to the effects of the slowdown in emerging economies (Chart 5). They are expected to remain more or less flat for the time being, but after that, they are likely to increase moderately, supported by the correction of the appreciation of the yen to date as emerging economies move out of their deceleration phase.

He says exports were growing, but by any realistic account that was only yen-induced. Last August at Jackson Hole, Kuroda sounded exactly the same, which should be quite alarming given that he clearly never saw the “overseas” problem developing and he still has to project “global growth” as nearly all that is left of QQE now.

Mr. Kuroda said that one reason for his optimism was an expectation that Japan’s exports would finally start to increase in coming months. One of the mysteries of the past year been [sic] the continued weakness in Japan’s exports, despite the sharp drop in the value of the yen, which lowers the price of Japanese goods on global markets.
“The world economy is recovering and increasing its growth,” Mr. Kuroda said, pointing to estimates of faster growth from bodies such as the International Monetary Fund and World Bank. “Given this good prospect of the world economy we expect Japan’s exports gradually to catch up.”

Japan’s trade problem has instead only continued, as “this good prospect of the world economy” is nowhere to be found and leaving exports never quite matching or living up to the yen’s pathway. Exports only gained 0.6% in September while imports collapsed 11.1%; so much for internal “demand.” A good proportion of that decline was due to the 23% drop in imports from Australia, continuing a string of such heavy contraction dating back to March. Against that resource and raw material view, Japan’s imports from China still grew 1.1% in September, despite the yen, as offshoring of production continues to haunt the Japanese economy. 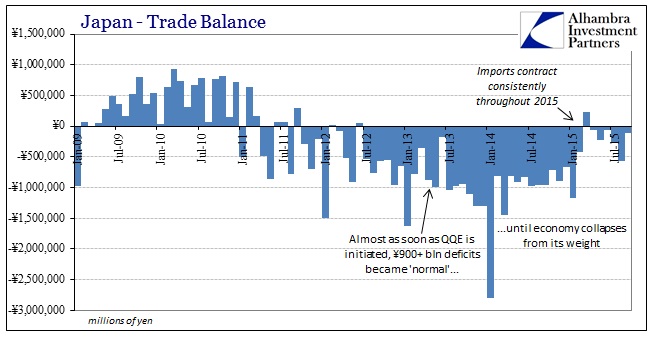 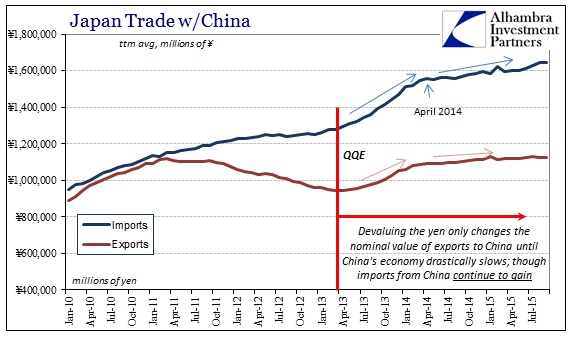 That is a factor that Kuroda, belatedly, acknowledged in his speech but if only to suggest, at least in his mind, that such an impoverishing trend may be coming to an end (without expanding on why and for what reason other than a curious view on the currency). While never suggesting his own QQE as heavily responsible, he at least seems familiar with reality here.

What is worth noting is that, as the excessive appreciation of the yen is corrected, Japanese firms — which had been prioritizing foreign investment — seem to be increasing their domestic investment. This is a big change. On the back of a marked improving trend in corporate profits and the effects of monetary easing, business fixed investment is projected to continue increasing moderately.

It seems as if he is quite alone in that assessment, as the trade data from the past few months suggests the opposite. Not only does internal Japanese “demand” appear far less than robust, there isn’t much to suggest a shift in Japanese offshoring; though I am absolutely sure he could produce any number of “surveys” that indicate as much. All that was left from his speech was to acknowledge the “transitory” nature of Japan’s CPI, which he dutifully recited as a part of that “global growth” expectation.

It isn’t often that a central banker is directly rebuked so firmly and immediately, but that is where we are as they attempt to hold the line on an optimistic future that careens further and further from reach.

Japan’s annual export growth slowed to a crawl in September as shrinking sales to China hurt the volume of shipments, raising fears that weak overseas demand may have pushed the economy into recession.
Ministry of Finance data showed exports rose just 0.6 percent in the year to September, against a 3.4 percent gain expected by economists in a Reuters poll.
That was the slowest growth since August last year, following the prior month’s 3.1 percent gain. The weak yen helped increase the value of exports, but volume fell 3.9 percent, the third straight month recording an annual decline. [emphasis added]

In what can only be a further slap to the optimism about QE of any kind, the slowdown in the current quarter is not limited to Japan’s exports alone, extending into business investment which is why the whispers of renewed recession for Japan have only grown louder and gained more and more confirmation. This idea of QQE, as it is with just QE, amounts to thinking fantasy as reality. Kuroda talks about export growth, but he is at great pains to avoid distinguishing nominal levels. Companies, even export companies, may have more yen in profit and revenue, but are actually doing, building and shipping less for it. That is an economic gain in the fantasy of a fiat world divorced from actual business conduct.

Exports to the United States, a major buyer of Japanese products, rose 10.4 percent in September, led by shipments of cars. In volume terms, however, U.S.-bound exports fell 4.7 percent.

None of this should be a surprise given that yen interference and financialism on the scale of QQE amount to attempts at negative redistribution. Given what the Japanese have been subjected to in the past two and a half years of QQE, it is nearly criminal to suggest they need only more of it. None of it has worked as promised and stated, so what might have changed? Absolutely nothing except the arrangement of qualifiers and excuses that litter the same shared central bank speech delivered over and over of late. Kuroda says “robust”, Yellen proclaims “strong”, and both only confirm they live not of this world’s economy. 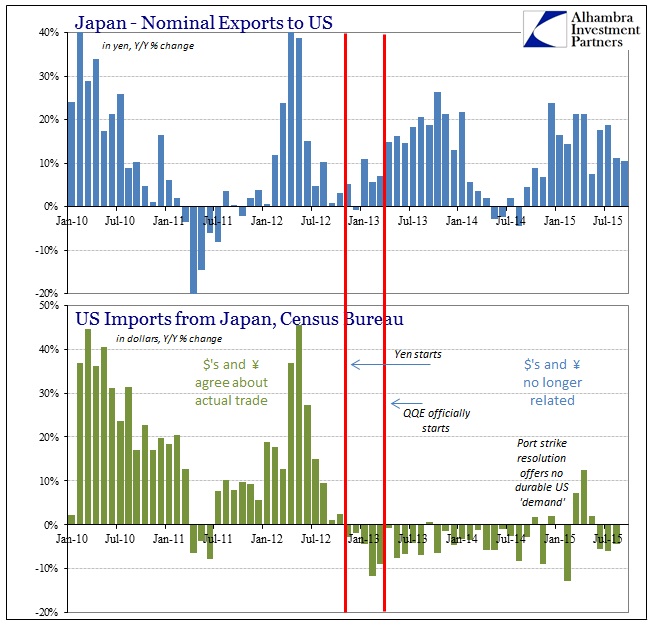 Written By
Other Writer
More from Other Writer
By Jonathan Newman The FOMC has consistently overestimated future Fed Funds Rate (FFR)...
Read More