Most economists are of the view that by means of economic indicators it is possible to identify early warning signs regarding an upcoming recession or prosperity. What is the rationale behind this approach?

The National Bureau of Economic Research introduced the economic indicators approach in the 1930’s. A research team led by W.C. Mitchell and Arthur F. Burns studied about 487 economic data to ascertain the mystery of the business cycle. According to Mitchell and Burns,

Business cycles are a type of fluctuation found in the aggregate economic activity of nations….a cycle consists of expansion occurring at about the same time in many economic activities, followed by similarly general recessions, contractions, and revivals which merge into the expansion phase of the next cycle; this sequence of changes is recurrent but not periodic.[1]

Business cycles are seen as broad swings in many indicators, which upon their careful inspection permit the establishment of peaks and troughs in general economic activity. Furthermore, the research team had concluded that because the causes of business cycles are complex and not properly understood it is much better to focus on the outcome of these causes as manifested through economic data.

Through data inspection, the experts in the NBER establish the reference points to the beginning and the end of the business cycles. Covering the period between December 1854 and June 2009 the NBER has identified 34 cycles according to their peaks and troughs. (On the NBER the last trough took place in June 2009 and since that period we are in an economic prosperity phase).

The peaks and troughs identified by the NBER serve as a reference point to classify various individual data as leading, coinciding or lagging. Once the data is classified it is combined into leading, coincident and lagging indices.

These indices are seen as economic signposts that are expected to alert analysts and policy makers regarding the state of a business cycle. When the leading indicators index starts to display the signs of weakening this is seen as a possible indication of weakness in economic activity in the months ahead.

The confirmation that the peak of the cycle might have reached is ascertained by means of the coincident index, whilst the lagging index provides the final OK that this might be the case. Hence by means of these three indicators, it is held, the phase of an economic business cycle can be ascertained.

Its numerous books and monographs are very long on statistics, short on text or interpretation. Its proclaimed methodology is Baconian: that is, it trumpets the claim that it has no theories, that it collects myriads of facts and statistics, and that its cautiously worded conclusions arise solely, Phoenix-like, out of the data themselves. Hence, its conclusions are accepted as unquestioned holy “scientific” writ.[2]

The difficulty in making sense of economic indicators

By mere inspection of the leading indicator index, it is not always so straightforward in ascertaining the state of a business cycle.

Should we regard any fall in the leading index as a precursor for future economic decline? For how many months must the index decline before we can be certain of an upcoming economic recession?

Also, if one were to wait for the confirmation of the leading index signal from the signal of the coincident index then what is the point of having the leading index? After all, it is supposed to alert policy makers and businessmen before the boom, or a bust, has started.

Furthermore, on this way of thinking we still require the final “ok” from the lagging indicators index.

Therefore, it would appear that until the final verdict is verified the economy could already be in a deep economic slump or in a strong economic boom.

Now, the US leading index fell by minus 0.2% in December 2015, minus 0.3% in January 2016 and by minus 0.1% by February 2016. In this case we had three consecutive declines in the leading index yet the NBER continued to classify the economy as being in an expansionary phase of the business cycle. 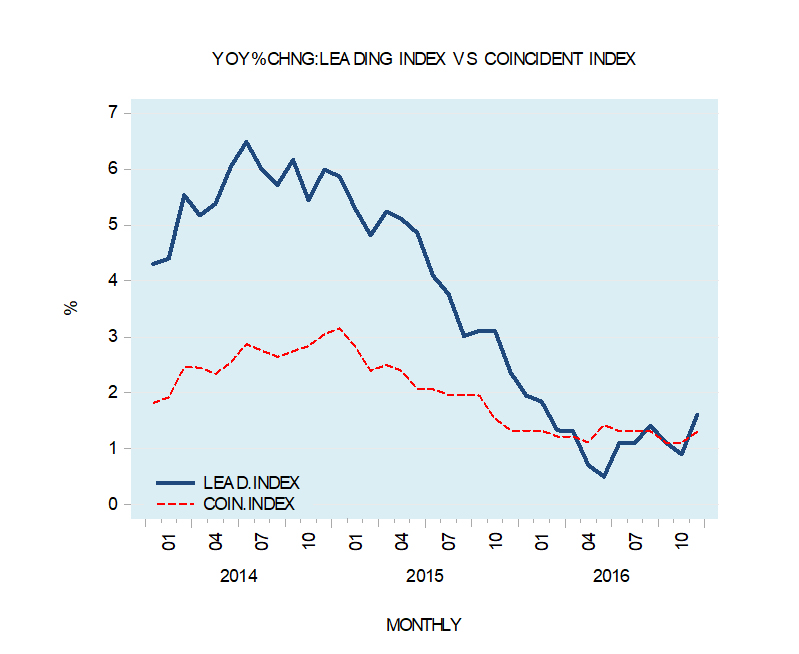 If the driving factors of boom-bust cycles are not known, as the NBER underlying methodology holds, how is it possible to make sense of movements in the leading index?

How could the government and the central bank introduce measures to counter something that is unknown?

Contrary to the NBER philosophy, data doesn’t talk by itself and never issues any “signals” as such. It is the interpretation of the data guided by a theory, which generates various “signals”.

In order to ascertain what business cycles are, there is the need to identify the driving force that is responsible for the emergence of economic fluctuations.

Are the sources of business cycles are really unknown?

What typifies the emergence of an economic slump that businesses that were once thriving experience difficulties or go under. They do so not because of firm-specific entrepreneurial errors but rather in tandem with whole sectors of the economy.

People who were wealthy yesterday have become poor today. Factories that were busy yesterday are shut down today, and workers are out of jobs. Businessmen are confused and they cannot make sense of why certain business practices that were profitable yesterday are losing money today.

Bad business conditions emerge when least expected — just when all businesses are holding the view that a new age of steady and rapid progress has emerged. In short, an economic slump emerges without much warning and in the midst of “good news”.

Contrary to the indicators approach, boom-bust cycles are not about the strength of the data as such. It is about activities that sprang up on the back of the loose monetary policies of the central bank.

Thus whenever the central bank loosens its monetary stance it sets in motion an economic boom by means of the diversion of real wealth from wealth generators to various false activities that a free unhampered market would not facilitate.

Whenever the central bank reverses its monetary stance this slows down or puts to an end the diversion of wealth towards false activities, and that in turn undermines their existence. In short, the trigger to boom-bust cycles is central bank monetary policies and not some mysterious factors.

Consequently, whenever a looser stance is introduced this should be regarded as the beginning of an economic boom. Conversely, the introduction of a tighter stance sets in motion an economic bust or the liquidation phase.

Any attempt by the central bank and the government to counter the liquidation phase through monetary and fiscal stimulus only undermines the pool of real wealth thereby weakening the real economy.

Since it is the central bank’s policies that set the boom-bust cycles in motion obviously then it is these policies that lead to economic fluctuations.

Whenever the central bank changes its interest rate stance the effect of the new stance doesn’t assert itself instantaneously – it takes time. The effect starts at a particular point and shifts gradually from one market to another market, from one individual to another individual. In short, the previous monetary stance may dominate the scene for many months to come before the new stance begins to assert itself.

Just by following the growth rate of money supply, one could get some idea regarding the boom and bust cycles in the months ahead. Given that the time lag from the money supply growth and the growth rate in economic activity is variable, the assessment as far as the future is concerned can be only qualitative.

Even if we don’t know the length of the lag we suggest that an analyst who has identified the primary causes of boom-bust cycles is likely to be on a firmer ground than an analyst who employs a “black box”. In short, he can make better sense of what various economic data implies once the major cause has been identified.

The economic indicators approach to ascertain the state of an economy was popularized by the NBER. On this approach, the state of the economy can be established by the inspection of massive amount of data. According to the NBER, given the complex nature of economic cycles it is much better to deal with the symptoms of the disease rather than trying identifying various causes, which for the time being are of mysterious nature.

We suggest that without understanding the underlying causes of boom-bust cycles employing policies in response to economic indicators to counter the economic cycles only destabilises the economy.

The primary cause of boom-bust cycles is the institution that supposedly “defends us” against the bad side effect of this menace. This institution is the central bank. By setting the boom bust cycles central bank monetary policies undermine the process of wealth formation i.e. undermining individuals’ living standards.

[1] Quoted in Allan P. Layton and Anirvan Banerji  “What is a Recession” www.businesscycle.com

0 replies on “Can economic data by itself provide early warning regarding boom-bust cycles?”