“Investment firms providing the service of portfolio management shall inform the client where the overall value of the portfolio, as evaluated at the beginning of each reporting period, depreciates by 10% and thereafter at multiples of 10%, no later than the end of the business day in which the threshold is exceeded, or, in a case where the threshold is exceeded on a non-business day, the close of the next business day.”

There are some things that it is not prudent to do. One of them is to shout ‘Fire !’ in a crowded cinema, especially if there isn’t one. As part of the EU’s second iteration of the Markets in Financial Instruments Directive, however, discretionary managers are now obligated to notify clients if their portfolio falls by 10 per cent or more during a quarterly reporting period. One particular data set will show the folly inherent in this obligation. It comes from the latest letter to shareholders of Berkshire Hathaway by way of Warren Buffett:

Berkshire, itself, provides some vivid examples of how price randomness in the short term can obscure long-term growth in value. For the last 53 years, the company has built value by reinvesting its earnings and letting compound interest work its magic. Year by year, we have moved forward. Yet Berkshire shares have suffered four truly major dips. Here are the gory details:

This table offers the strongest argument I can muster against ever using borrowed money to own stocks. There is simply no telling how far stocks can fall in a short period. Even if your borrowings are small and your positions aren’t immediately threatened by the plunging market, your mind may well become rattled by scary headlines and breathless commentary. And an unsettled mind will not make good decisions.

Happily for Warren Buffett, as the CEO of a US-listed diversified holding company, he isn’t covered by MIFID II. Unhappily for us as discretionary managers regulated in the UK, we are.

In 2009, Buffett’s business partner Charlie Munger was asked how concerned he was that Berkshire Hathaway shares, the single largest component of his net worth, had dropped by more than 50% in value. Even more plain-speaking than Buffett, his response was:

Zero. This is the third time that Warren [Buffett] and I have seen our holdings in Berkshire Hathaway go down, top tick to bottom tick, by 50%. I think it’s in the nature of long-term shareholding that the normal vicissitudes in markets means that the long-term holder has the quoted value of his stocks go down by, say, 50%.

In fact, you can argue that if you’re not willing to react with equanimity to a market price decline of 50% two or three times a century you’re not fit to be a common shareholder, and you deserve the mediocre result you’re going to get compared to the people who can be more philosophical about these market fluctuations.

Munger’s response is brutally expressed, but honest. If you can’t keep your head during an inevitable market decline, you don’t deserve more than the mediocre returns you will garner from sheltering in less ostensibly risky assets.

And the key phrase here is “less ostensibly risky assets”. It has become conventional wisdom amongst most wealth managers, egged on by regulators, that government bonds are essentially riskless. Tell that to Gilt investors in the 1970s who, from peak to trough, as shown in the chart below, suffered real losses of over 35%, and endured a 12 year period during which they earned no real returns. What would have been the practical benefit of a communication from their discretionary manager notifying them of a 10% drawdown within their portfolio – on several occasions ? Where else could they possibly have gone ? 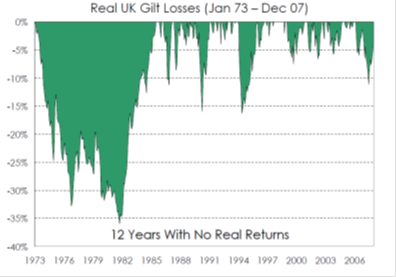 Bear in mind that Berkshire Hathaway shares have also been one of the best performing assets to hold, for the long run, in history. Given the extent of drawdowns in an exclusively Berkshire Hathaway-based portfolio, the likelihood of incurring a 10% drawdown in something ostensibly “safer”, even if well diversified across multiple asset classes, is clearly quite high. Encouraging patrons to flee from a crowded cinema that may not be on fire does not seem like the height of prudential sophistication.

There is a presumption that regulation works. Banking and financial services are among the most tightly regulated industries in the world, but that has failed to prevent a succession of financial crises including the Global Financial Crisis of 2007 – ? Business adviser Phil Young points out just some of the problems associated with MIFID II’s 10 percent rule, including:

It has been said that the time-honoured role of the regulator is to wait until the battle is over, and then to waddle onto the battlefield and shoot the survivors. Retail investors have a right to expect that the regulator is acting in their best interests. A regulatory regime that has essentially corralled wealth managers into low yielding, debt instruments that could perform terribly under a variety of plausible scenarios should surely be questioned by any professional investors endeavouring to protect the real purchasing power of their clients’ capital.

Written By
Tim Price
More from Tim Price
“Everyone is bullish. Contrarians know that must be bearish. However, everyone has...
Read More