There are three books that take pride of place in my Austrian bookcase. These are Socialism, by Ludwig von Mises; The History of Intellectual Thought, by Murray N. Rothbard; and Democracy the God that Failed, by Hans-Hermann Hoppe. In my own mind these books glow when I look at them, up there on the shelf, and I even have one of them signed by one of the authors, while he was ensconced within the cloisters of Oxford University.

You might be asking where is Human Action? Where is Man, Economy, and State? And where is Money, Bank Credit, and Economic Cycles? Well, these books are there too, further along the shelf. But the Big Three bob in an exalted gravitational bubble of their own, because they form the solar core of my own personal life-long cure from socialism, along with various lesser satellites which rotate around them, including Nineteen Eighty-Four, Atlas Shrugged, and An American in the Gulag.

As a hard-core Stalinist by the age of nine, after having read Das Kapital in my local state library, by the time I had reached thirty I had mellowed slightly into a hard-core Marxist and a willing clandestine ex-Militant Tendency foot-soldier in the Machiavellian rise of the New Labour army in Britain, most of us following the camp magazine, Marxism Today, edited by Martin Jacques, the man who invented the term “Thatcherism”. I was so far entombed within this appalling Death-Eating dark side, that I’m convinced, looking back, I must have had snake’s eyes, a forked tail, and diabolical horns.

Fortunately, I managed to cure myself from this orcish horror, mainly due to the fact, of course, that socialism is utter self-serving elite-generated nonsense and the most evil destructive bone-headed religion that mankind has ever invented.  Amongst many other disastrous human-hating onslaughts it has engaged in, in its bid to keep people stupid, sick, and poor — and thus easier to rule over and exploit as tax cattle — socialism has slaughtered tens of millions of people, particularly in the twentieth century, which must truly be its envious bloody golden age. Alas, it took many years to cure myself from this virulent mental infection, involving a decade of self-realisation, self-study, and many tough self-directed questions, as well as several broken relationships, memorable bitter accusations of treachery, and the painful sloughing of mental habits burned into my mind through years of angry hatred and vicious envy.

The three books which finally wiped the usually-immune virus of socialism clean from my mind were the exalted Big Three above, especially Socialism, by Ludwig von Mises, a book which always remains fresh and inspirational on every re-read, a sort of non-fictional equivalent of Lord of the Rings.

But did room exist for a fourth book within my hallowed core? Was I genuinely fully cured or was there the remotest chance I could slip back into the skeletal clutches of Voldemort’s sauronesque worshippers, the fatally conceited socialist Death Eaters?

Fortunately, I think I am now fairly resistant to the drenching poison of Marxism, and all of its goblinesque derivatives such as environmentalism.  However, as the fabulous George Carlin pointed out in one of his amazing HBO specials, you always need to keep your immune system in tip-top fighting order to kill off the re-entry of old familiar viruses. Perhaps I needed a fourth book to provide this required re-innoculation of my fighting spirit against the seemingly endless mindless legions of the state-indoctrinated cannon fodder of socialism?

I think I have now stumbled upon this fourth book.

Although my self-education had kicked socialism back into the envious schoolyard nursery where it belongs, all the books I had read had never clarified one last question, which had nagged at me for years. Why does socialism keep taking so long to fail, with the Soviet Union surviving for 70 years and the fiat currency union of the west surviving for 40 years, since 1971? Yes, there is economic calculation, the short-sightedness of fools, and the system of organised criminal lies which we name government, but what is the essential mechanism that separates the free market from the jackboot of socialism and how does a typical rancid and rotten bloom of socialism survive for decades, when from my previous readings such a malodourous bloom ought to fail within years or even months, once the hideous mask of its hateful spiteful envy is revealed?

Even the most virulent and aggressive form of the creed — the National Socialist German Workers’ Party — managed to survive for a dozen years, from 1933 to 1945, before this particularly cancerous party of socialism imploded, with milder forms of the disease, such as our own British Labour Party, managing to survive for a hundred years before collapsing in 1979, only to re-appear in a more camouflaged form as the more fascist variant of New Labour, which predictably blew itself out after thirteen unlucky years of boom and bust, hopefully to now die under the feeble and pathetic leadership of the spectacularly inglorious Ed Miliband, son of the influential Marxist intellectual, Ralph Miliband.

Yes, we can talk about western subsidies to the Soviets and the misplaced faith of people in central banks to refrain from inflating, but this is skirting the central issue; why does socialism survive for decades, no matter how appalling its variant form? If we are to believe that socialism is stupid and self-destructive, why has it taken such a hold of humanity and why does it keep surviving and prospering for so long in its various incarnations?  If the flowering Hayekian market of ideas and the evolving Schumpeterian market of freely creative destructionism really do work in partnership to drive out failed innovations and to promote successful inspirations, why are there so many Keynesians and so few Austrians?  Why is there so much government and why is there so little freedom?

Jesús Huerta de Soto uncovers and reveals the mysterious ghost-in-the-machine hiding behind these questions in a beautifully simple connective way, in Socialism, Economic Calculation, and Entrepreneurship. He distils the rough juniper berries of human action into the Bombay Sapphire gin of entrepreneurship and elegantly blends this with the chilled quinine tonic of economic calculation. Delicately mixing this with the limes of Salamancan history and the Andalusian bitterness of political analysis, the resulting 300-page book is one of the finest Austrian monographs I have ever had the privilege of reading and easily breaks into my triumvirate of heroic works, to help form a new quadrumvirate. 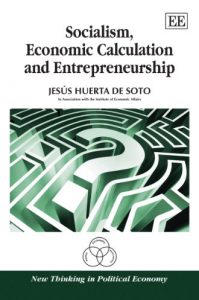 Yes, the top-ranking book is still Socialism, as Gandalf the White, with the other three jostling alongside as Aragorn, Gimli, and Legolas; Socialism, Economic Calculation, and Entrepreneurship now plays the role of the far-seeing prince of the Mirkwood elves.

So how does Legolas achieve this far-sightedness, where Gandalf, Aragorn, and Gimli fall short? Because Huerta de Soto uses both sides of the mind in equal measure, including the parallel-processing right-mind, whereas most writers typically concentrate on the serial-processing left-mind. Drawing parallel-processed pictures with his words to complement a serial-processed stream of ideas, Huerta de Soto achieves a delicately balanced act between the right and the left conscious minds, enabling them to work together to see through to the root causes of the failure of socialism and the triumph of the free market. As I sat reading his book, I could see a sparkling and ever-changing set of shimmering human connections constantly changing and shifting, with the lights of new ideas twinkling in a flexible Hayekian blend of free human thoughts and actions, always evolving towards — though never achieving — a final perfect form where humanity is best served by this diaphanous liquid molecular structure.

I could also see the destructive boot and the mindless compartmentalising scalpels of the blind self-serving socialist elite, constantly trying to wreck this evolving form and to cut its connections to make this glittering form do what they wanted and to do what served their personal immoral interests, against the independent temporal wishes of the rest of the nodal system. However, despite this constant unwelcome interference, no matter where the socialist boot falls and no matter where its regulatory controls cut the informational connections, the entity always tries to survive, like an ants’ nest disturbed by a spade in your back garden.

Socialism thus survives because of the free market, which constantly tries to repair the damage socialism causes through its taxations, regulations, and debt-fed inflations. The free market self-repairs, re-connects, and re-organises itself — spontaneously — like a river in flow coping with the damming of malcontented beavers. The final triumph of socialism can thus be seen as the complete damming of the river and the obliteration of humanity, and the final triumph of the free market will be when this evil dam is finally dissolved, destroyed, and eradicated, and the river can flow freely again without obstruction.

Thus, the more socialism we have, the quicker it kills itself, destroying that which it parasitises, as with full-blooded national socialism and soviet communism; the more anaemic versions of socialism allow a more bloodless monster to survive longer, as with social democracy in the western world.

However, socialism is an always-expansive beast, feeding upon the seven deadly sins of wrath, greed, sloth, pride, lust, envy, and gluttony, via the mechanisms of warfare and welfare.  Although the ongoing fight between socialism and the free market may sometimes be balanced for long periods, as in a fiercely contested but static Sumo wrestling contest or a brutal but static rugby scrum, socialism is thus constantly trying to break out and to crush the free market, therefore we need to obliterate this green-eyed aberration completely, if we are to achieve a safe, free, and prosperous world.

All this, and much more, becomes clear when you read Professor Huerta de Soto’s book and this short review does it little justice; you must read the book yourself to form your own conclusions. I can only say, however, that I thoroughly recommend that you do, especially all those people who wish to understand the insidious and self-righteous evil of socialism and therefore how to remove its suicidal and destructive human-hating impulses from the face of the Earth, before these self-immolating impulses destroy us in their turn.

Two further Cobden Centre articles related to the post above: