“SIR – I’m fairly sure that the problems associated with the Olympics will crop up in my home town: overcrowding, terrorist threats, traffic congestion and overbearing jobsworths stopping people from going about their business because they are not wearing apparel emblazoned with the latest product from an official Olympic sponsor. I have therefore heeded the government’s advice and am working from home for two weeks, clad in my Nike shorts and a Pepsi T-shirt, safe from the clutches of the Olympic panjandrums.

The 100-metre sprint to my local shop to replenish beverages will be my only exercise during this time. Must dash; as you say, the sofa beckons.”

The London Olympics are in many respects the perfect symbol of our time: the public relations manifestation of an otherwise fiscally beleaguered government momentarily and drunkenly happy, in the glare of the world’s media, to spend other people’s money without restraint. And what a lack of restraint. The London Olympics are the perfect symbol of bureaucracy and inflationism in action: an original budget of £2.4 billion (2005 vintage) has swelled to £9.3 billion (of other people’s money) in 2012. Nobody likely believed the original figure; few people likely believe the current guesstimate. Not that that has prevented the Department of Trade and Industry from fancifully predicting that the Olympics will generate a spuriously precise-sounding £13 billion of inward investment for the UK over the next few years. Why stop there? Why not just assume that the benefits of inward investment will be, to all intents and purposes, infinite?

And the London Olympics are acting like a mirror in which we observe ourselves. Most will probably see the event as a celebration of individual physical achievement. Some, more cynical perhaps, will see the triumph of lazy nationalism (we are all affiliated to our country of birth by pure happenstance) over the primacy of the individual, spiced with a generous smack of bread and circuses. And some will doubtless see the event as a grotesque marketing Bacchanal in which the purveyors of nutritionally baleful foodstuffs and sugar water get to bathe contentiously in the reflected glory of a festival of visible health. (Vince Cable, on the other hand, evidently sees the Olympics as a vainglorious opportunity to point out his suitability for the role of Chancellor of the Exchequer. We would suggest that a former economist is uniquely ill-suited for the role of steward of the public purse, and that Vince’s not obviously diminished sense of ego is writing cheques that his professional experience cannot possibly cash, but if he wants to have a crack at a thankless job that we wouldn’t wish on our worst enemy, or even Martin Wolf, he should probably be allowed to get his way.)

Like Olympic sponsors, central bankers inhabit a parody of a free market, in which state- sanctioned monopoly power attempts to crush all competition. The financial environment gets more surreal (if that’s possible) when the competitors to central banks are the markets themselves. In the 1980s, Margaret Thatcher spoke for the spirit of the time when she declared that you cannot buck the market. But as we slouch uneasily through a depression aggravated by political (in)action, former Goldman Sachs MD (and President of the European Central Bank) Mario Draghi appeared to speak for the spirit of our time when he pledged last week that the ECB was “ready to do whatever it takes” to preserve the single currency, adding, with a nice political flourish, “Believe me, it will be enough”.

Call us old-fashioned, but we wouldn’t automatically trust a Goldman Sachs alum turned central banker with anything more dangerous than string. That said, when central bankers tip the markets the wink about their intentions, it makes sense to acknowledge the intent. It would be reasonable to infer from Mr Draghi’s declaration that he intends for the ECB to buy Spanish government debt, for example, to try and establish a firewall in the raging inferno that is the euro zone debt crisis. It might even be reasonable to infer that the ECB might ultimately capitulate formally and start printing money in more or less the same way the Federal Reserve and Bank of England have done. 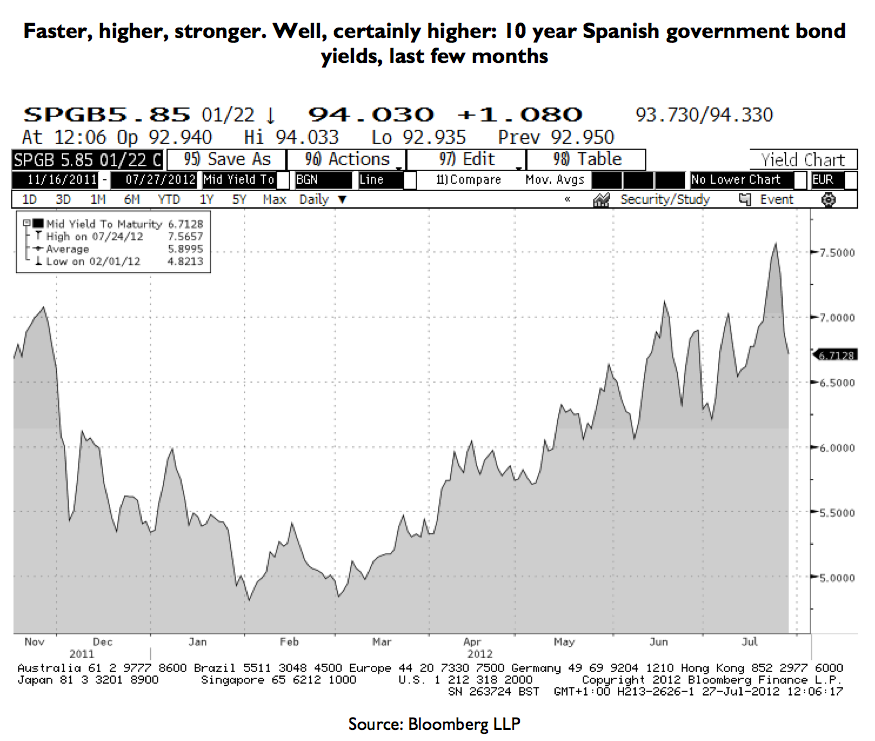 So we wouldn’t fight the ECB in the same way we wouldn’t elect to fight the Fed. But when rogue central banks are manipulating / distorting the prices of pretty much all western market sovereign debt, it strikes us that, as with John Badham’s ‘War Games’, when you can’t really understand what’s going on and you can’t really begin to fathom the attendant risks, sometimes the smartest move is not to play. So whether it’s choosing not to play in Spanish government debt markets (look at the vicious short term swings in those 10 year Bonos yields even if the long term trend seems clear) or choosing not to play in German government debt markets (shown below), we choose not to participate in a market self-evidently open to price manipulation by institutions like the ECB, with effectively near-infinite monetary firepower. 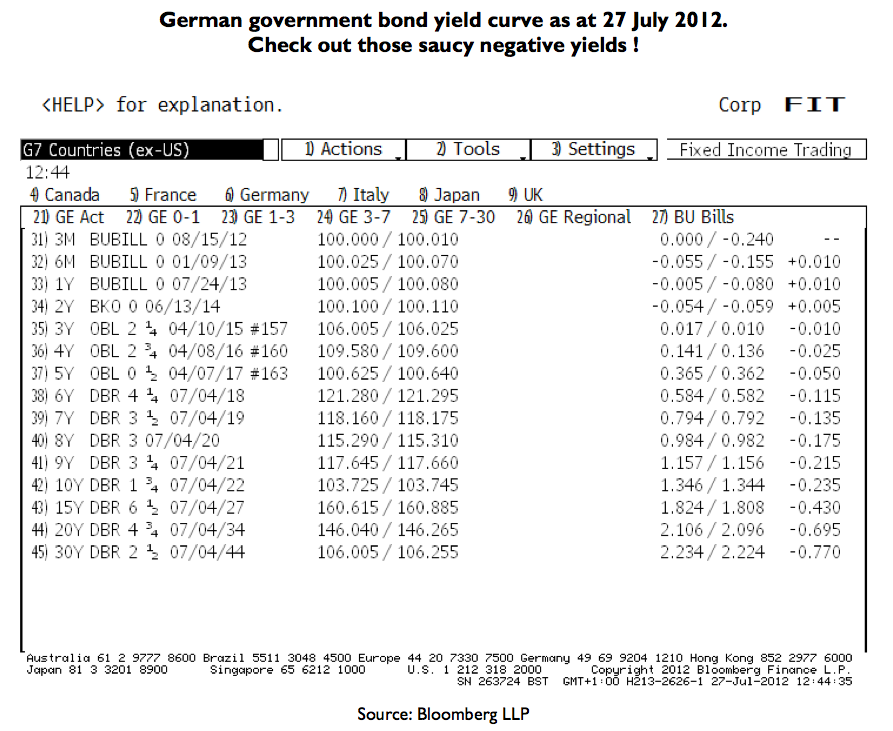 Explicit monetary stimulus may not yet be part of the ECB’s official mandate and it may not even be legal in the context of the euro zone, but tiresome things like the law or due process have not so far obviously impinged on central banks or governments as they continue to make up the rules as they go along in a doomed attempt to bail out the likes of the banking system / government bondholders / Goldman Sachs at the expense of everybody else.

Very little has definitively changed during the course of the financial crisis and where there has been evidence of change, very little of it seems to have been positive. Governments appear to believe that a problem of overmuch indebtedness can be resolved by the creation of more debt. Which is why the central banks are now so systematically dangerous. Those who should be the stewards of sound money are doing their level best to destroy it. This is Monetary Fahrenheit 451. Those who should be extinguishing monetary fires are doing their best to set them. But this monetary madness is being conducted in full public view: in Ronald-Peter Stoeferle’s magisterial recent piece for Erste Group (In GOLD we TRUST), he shows how gold has kept pace more or less perfectly with the inflationary and currency-depreciating activity of the world’s major central

banks over the past decade. Gold remains, in our view, the best currency of all in a world where all the paper varieties are being printed toward potential destruction. (This observation has not escaped the central banks themselves, who have turned net buyers.) One doubts that they are exhibiting this behaviour purely out of what Fed chairman Ben Bernanke recently called “tradition”. 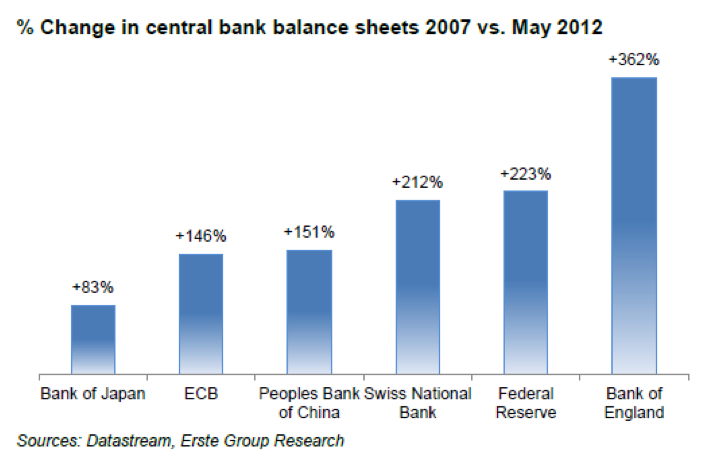 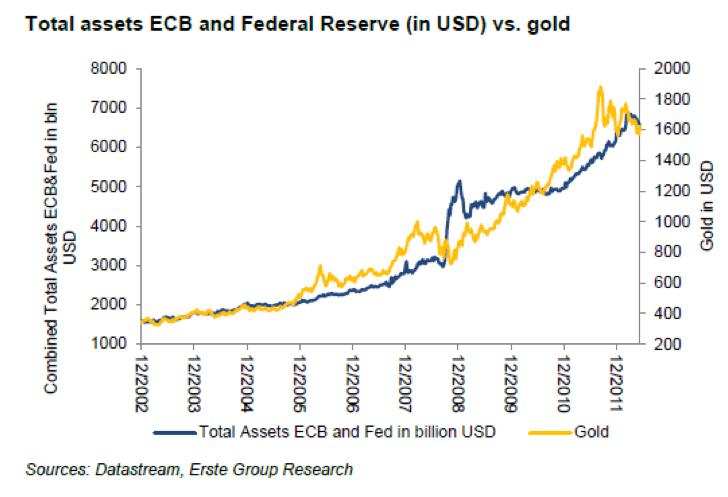 The problem of our time is that in economic terms we have effectively reached the limits of what is possible within a democratic system. A world suffocated by debt requires constant economic expansion, if only to service the debt. That economic expansion is no longer viable, and most western governments have reached the practical limits of debt creation. On the one hand, financial markets “want” a massive deleveraging. On the other hand, central banks would like the game to continue a little further, on the basis that no political turkey ever votes for Christmas or defenestration from office. Something must ultimately give. We don’t want our client portfolios caught in the middle of a tug of war that central banks can dominate over the short term but which they cannot ultimately win – hence our refusal to engage with any market that is subject to regulatory “capture” (i.e. fundamental value has been squashed through politically driven market interference). For the same reason, we cannot wholeheartedly engage with stock markets that are being fundamentally distorted by central bank monetary stimulus. We would humbly submit that without hopes (fears?) of QE to infinity, most western equity indices would be significantly lower than where they hover today. If you cannot identify the patsy at the poker table..

There is a reason why athletes achieving the pinnacle of sporting endeavour are rewarded with medals made largely from gold, as opposed to, say, paper. And unlike the central bankers who are dangerously distorting asset prices in the naïve hope of achieving economic stability, at least those athletes will be earning those rewards on a level playing field, and with proper competition.

Written By
Tim Price
More from Tim Price
“There is no simple, painless solution. The world has to reduce debt,...
Read More

2 replies on “An Olympian hurdle”