Or how central bankers are ducking the wealth transfer issue

Central banks must be increasingly aware that critics of monetary policy are getting some traction in their arguments, that not only have monetary policies failed in their objectives, but they are creating counterproductive economic distortions as well. Chief among these is the transfer of wealth that comes with monetary debasement. Central bankers have always glossed over this issue, which if made to stick would undermine monetary policy to the extent that central banks would then have no role in the management of our affairs. Instead, they would be reduced to policing money to make sure it is always sound. At the least, they would have to become Schachts, instead of Havensteins.1

When criticism begins to stick, it is tempting to defend yourself by traducing your critics’ arguments instead of trying to understand the criticism. This is what the central banks are now doing, as exemplified by the Bank of England and the ECB. It is an early sign that intellectually, they are on the run.

The central banks’ defences are made easier because they can counterclaim benefits that have nothing to do with a specific argument. And monetary intervention causes multiple effects, which in turn vary over different timescales, allowing central bankers to argue virtually anything they choose. Mario Draghi told us in a speech in Berlin last October that jobs have been created. He claims that monetary policy has led to fall in income for the highest earners, while the lowest quintile in the euro area have seen no change (Chart 3), presumably reflecting a fall in unemployment. Those that have suffered most, according to Draghi, are the wealthiest households. In Chart 5 in his speech, he claims everyone is better off under the ECB’s stewardship.

One supposes that revolting euro area residents have no cause for complaint under these successful monetary policies, and it’s only the undeserving rich who have taken a haircut on their earnings. But critics of statistics, right or wrong, get nowhere, and central bankers know it, even if the truth differs from their claims.

The Bank of England tries to persuade us that on the evidence of the Gini coefficient (which I explain below) its interest rate policies have not contributed to inequality. If this is the case, the intertemporal effects of the increase in the quantity of money and credit resulting from lower interest rates have not materially disadvantaged the poorer members of society, as followers of the Cantillon effect have argued. The Bank also separates out wealth from income, when the two are closely related.

Even Lenin was said by Keynes to have declared that the best way to destroy the capitalist system was to debauch the currency, with which Keynes concurred. The problem for central bankers is that they can understand the principle which admits to the transfer of wealth from ordinary people. But how can they argue that increasing the quantity of money by reducing interest rates does not lead to wealth transfer, and if so, at what point does one rule apply, and the other take over?

The Bank of England side-steps the wealth effect and implies that there is little or no evidence on relative incomes from interest rate policy. This isBen Broadbent, Deputy Governor on 18 November 2016:“…the simple Gini coefficients do tell a story – or rather, perhaps, the absence of one. Structural interest rates don’t do much to the distribution of income, most of which reflects the spread of wages”.

Admittedly, manipulation of interest rates is only one, albeit the most important aspect of conventional monetary policy. But by taking only one element, Broadbent is deflecting the argument. Furthermore, by referring to the Gini coefficient as being simple, he implies that a more detailed examination might yield different results, so technically, he can claim he is not misleading us.

In his article (linked above), he goes on to admit to changes in wealth, which as we all know must have their basis in the management of interest rates, the foundation of monetary policy. But by referring to changing values in house prices and stock markets, he claims there is little net effect by looking at the peaks in valuation(“…either side of the millennium house prices stopped rising. But, like those of equities, they are no higher now than they were a decade ago”.)

By selecting suitable statistics, the real issue has been glossed over, and that is the divergence of incomes between the highest and the lowest has increased significantly over the years. This is either due to monetary policy, fiscal policy, or alternatively both. Furthermore, there is a difference in people’s eyes between someone who earns a fortune from inventing and producing something which obviously benefits everyone, and a wide-boy who earns a fortune by ripping people off. The latter definition is routinely applied by the public to bankers, licenced by the state to create money, and who do extremely well out of an expansionary monetary policy.

Therefore, the issue behind social inequality is emotionally charged, and needs rational debate. In this article, I attempt to turn the debate from the broad generalisations used by central bankers to defend themselves and their policies, to the real issue: the socially-divisive effects of monetary policy. We will start by looking at the Gini Coefficient, or index.

What is the Gini coefficient/index?

Gini coefficients are presented as a means of comparing income distribution in different jurisdictions, with no further explanation, other than the coefficient is higher or lower, or rising or falling. A rising coefficient (or index if expressed as a percentage) is taken as an indication of increasing inequality, so a higher number would be taken by the Bank of England as evidence that monetary policy might be leading to greater inequality (but the Bank could argue it might be due to other factors). 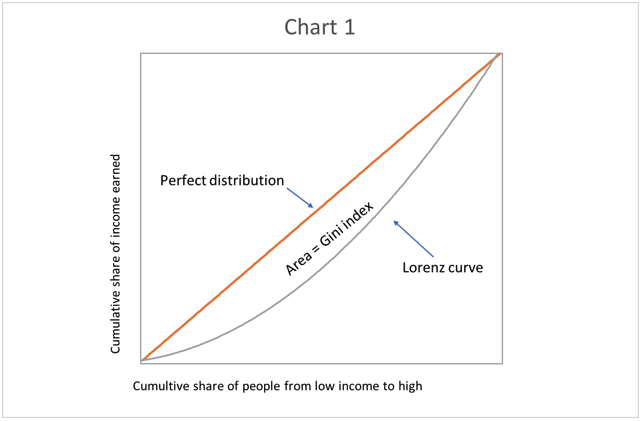 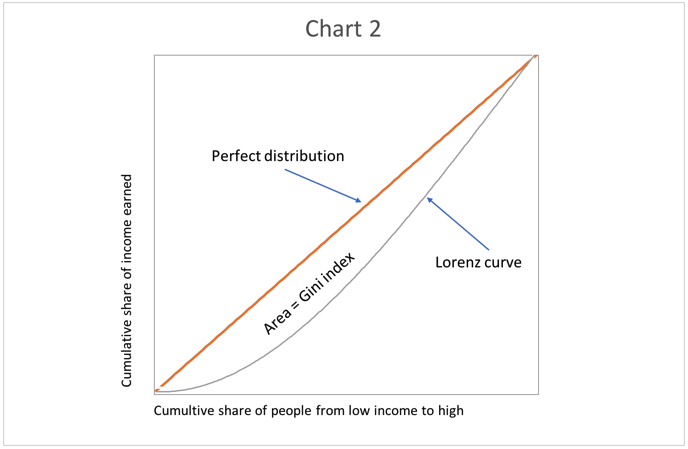 In this chart, the number of people on low incomes is greater than in Chart 1, for the same Gini index. We can therefore conclude that as a measure of changes in income inequality, the Gini index is irreparably flawed. As an index, it suffers from average-itis. It’s an average that tells you nothing about how the underlying conditions affect ordinary people.

The reason this is important is because it is cited as evidence by the Bank of England that interest rate policy does not appear to have contributed to inequality. Furthermore, the World Bank estimates that the UK’s Gini Index has fallen from 35.93% in 2007 to 32.57% in 2012, its last estimate, taken as confirmation that income inequality appears to have diminished between those years.

The Gini index is being used by the Bank of England to imply that monetary policy has not led to a transfer of the purchasing power of income from the poor to the rich. The Cantillon effect posits otherwise. The Cantillon effect describes how the first receivers of new money, additional to money already in circulation, benefit from prices yet to reflect its existence in the market, while the last receivers of it find prices have already been driven higher by that new money. Those at the tail-end of monetary policy find the purchasing power of their income and cash reserves has diminished, and they are being effectively taxed, not stimulated as neo-Keynesians would aver. And those in between suffer the same fate, to lesser degrees.

In a fractional reserve banking system, the first receivers, and therefore the beneficiaries of new money, are the customers of banks who have obtained bank credit, conjured out of thin air. At the same time, the banks themselves profit from geared margins on their lending. This is because prices of goods have yet to adjust to the increase in the quantity of money entering circulation. The next layer of beneficiaries is the suppliers to the initial receivers of the new money, followed by their suppliers, and so on. Because banks are granted a licence to create new money, it is hardly surprising that the financial sector and those that work in it are prime beneficiaries of monetary expansion, at the expense of those further down the monetary benefit chain.

The ultimate losers are those who are not creditworthy, and living on fixed incomes. There is also a proximity effect, with financial centres driving up prices locally, compared with more distant locations.

Critics on the left rightly notice the income inequities, but fail to appreciate their origins, attributing them to government fiscal policies. Cantillon explains the engine behind the redistribution of income through monetary inflation. The bald fact that inflation transfers wealth from savers to borrowers is widely accepted by economists, presumably including those employed by central banks. Yet they are trying to convince us otherwise.

Broadbent ducks the application of the Gini index on wealth, claiming the statistics are less reliable. But it is impossible to isolate income from wealth, when considering the effect of monetary policy on individuals. You may as well argue that water coming out of a tap is different from water already in the bath. Furthermore, the Cantillon effect is not limited to the effect of additional money on prices of consumer goods, so long as one appreciates that inflation affects asset prices as well. It explains shifts in relative wealth from those whose savings are invested in low-risk investment media, such as cash, savings accounts, and national savings bonds, in favour of those prepared to make more risky investments, such as listed securities and property. Typically, this disadvantages the low-paid relative to the middle and upper classes. Furthermore, the low-paid have the lowest level of home ownership, so they have missed out on rising house prices, driven by cheaper mortgages available only to more credit-worthy higher earners.

The income and benefits of the low paid are often entirely absorbed by the basics in life such as rent, utility charges, and food. They find themselves trapped, unable to progress. And when rentals increase, or government-regulated utility charges rise, the basic standard of living of the poor is diminished, particularly when benefits and minimum wage rates fail to rise to the same extent. Therefore, the Bank of England’s claim that there is no evidence that its monetary policy, designed to lower the currency’s purchasing power, leads to an increase in income inequality is a fallacy hidden in a sea of half-truths.

While Gini indices can provide a broad mathematical overview of social inequality, they do not tell us about the shifts in income and wealth that occur between different individuals. The Cantillon effect demonstrates how a monetary and interest rate policy, by changing the quantity of money and credit, reallocates resources between different members of a society.

An expansionary monetary policy rewards spendthrifts and penalises savers. The benefits and costs are distributed unevenly, and are economically and socially disruptive. We have moved a long way from the Keynesian concept of deficit spending being limited to when the economy appears to be failing. Today, intervention has become continual, with the emphasis on monetary policy. Inevitably, the consequences must be distributional, otherwise the policy would not have been embarked upon in the first place.

The headline statement, that there is little or no evidence that monetary policy since 2008 has contributed to social inequality, is misleading, and deflects blame for society’s ills away from monetary policy. The implication is blame must lie with fiscal policy or free markets themselves. And while central banks and finance ministries apportion responsibility for policy failure, it never occurs to either party that ordinary people do far better running their own lives with sound money.

1The presidents of the Reichsbank after and before Germany’s hyperinflation of the 1920s respectively.

The Royal Mint is increasingly wary of criminal gangs copying their efforts. In a sampling of the currency in circulation across Britain in 2008,…