“Son, we live in a world where markets have been distorted by vast amounts of QE, and that QE has to be fought by traders with guts. Who’s gonna do it? You? You, ETF manager? I have a greater responsibility than you could possibly fathom. You weep for free markets and you curse the Bernanke, Kuroda and Draghi.

“You have that luxury. You have the luxury of not knowing what I know; that QE’s death, while tragic for some, probably saved markets. And my existence, while grotesque and incomprehensible to you, saves markets. You don’t want the truth because deep down in places you don’t talk about at parties, you want me in those markets . You need me in those markets. We use words like honour, risk, stop-loss.

“We use these words as the backbone of a life spent defending something. You use them as a punchline. I have neither the time nor the inclination to explain myself to a man who rises and sleeps under the blanket of the very market freedom that I provide, and then questions the manner in which I provide it! I would rather you just said “thank you” and went on your way, Otherwise, I suggest you pick up a book and start trading at a post. Either way, I don’t give a damn what you think you are entitled to!”

Challenged to distil the secret of investing into just three words, Benjamin Graham offered the phrase MARGIN OF SAFETY. The adjectives ‘value’ and ‘growth’ are routinely butchered, manipulated, stretched and abused by fund managers, but the defining difference between the two is that ‘value’ stocks possess a margin of safety, and ‘growth’ stocks invariably don’t. When a genuine ‘value’ stock – listed shares of a high quality company with disciplined, shareholder-friendly management and generating high and sustainable levels of cash – gets cheaper, the logical response is to buy more. When a ‘growth’ stocks gets cheaper, it may simply mean that the tide is going out. Dollar cost averaging into ‘value’ stocks makes sense for those with the liquidity to do it. Dollar cost averaging into ‘growth’ stocks can be straightforwardly dangerous. Example: Alliance Capital and its fund manager Alfred Harrison, acting on behalf of the Florida state pension fund, elected to dollar cost average shares of Enron stock as they fell during the second half of 2001. The Florida state pension fund ended up losing $328 million.

The disparity between ‘value’ and ‘growth’ – as measured by the relative performance of the MSCI World Value Index and the MSCI World Growth Index – has rarely been this stark. The last time it was so acute was at the height of the dotcom bubble. 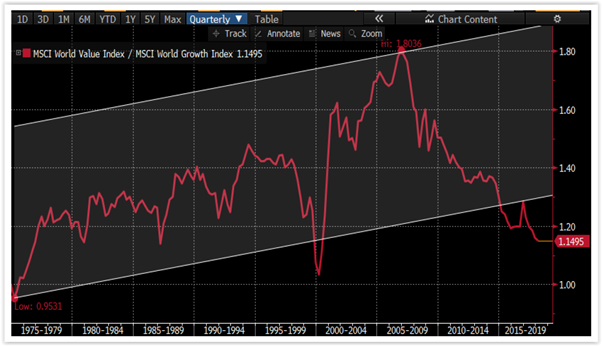 Assuming reversion to the mean, and in light of its significant recent underperformance relative to ‘growth’, ‘value’ has tremendous potential to outperform from here. In the words of Horace,

A ‘value’ bias often makes sense, but it makes more sense to us when both bond and stock markets are close to historic highs, and are therefore more vulnerable to what everyone politely calls ‘corrections’. Dollar cost averaging in to stocks that may in extremis be worth nothing is clearly not a preferred strategy.

Thus far we have addressed our natural inclination in relation to equity selection. But although (‘value’) equities form the lion’s share of our discretionary portfolios, we see merit in diversification beyond the realm of listed stocks. We also see merit in asset class diversification far beyond the realm of conventional bonds. As the Bank of England’s chief economist, Andrew Haldane, recently pointed out, both short term and long term interest rates remain at close to 5,000 year lows.

Interest rates in their historical context 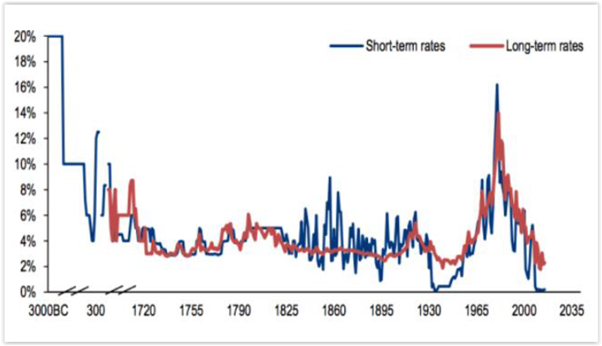 Now that both policy rates and market-set interest rates are rising in the Anglo-Saxon bond markets and elsewhere, the risks to capital in bonds are surely demonstrably higher than their long term average. Given recent price action in bond markets, bond “investors” seem finally to have realised that it is not 1982 but actually 2018. The potential for even government bonds to generate capital losses does not seem to be well understood by a regulator that effectively compels wealth managers and pension funds to own them. In 1973, for example, an investor exclusively in UK Gilts would have incurred a subsequent real term loss of over 35%. He would not have returned to profit until 1985. He would have endured 12 years with no real returns. Given that Gilt (and other government, and corporate bond) yields are demonstrably lower than in the 1970s, is there the potential for government bond investors to lose even more in real terms if, say, the ghost of stagflation returned in the coming months or years ?

For these reasons we diversify into two ‘alternative’ asset classes, namely uncorrelated funds (in our case, systematic trend-following funds) and also real assets, notably the monetary metals, gold and silver, and related investments. On which note, readers may find the following  from Rusty Guinn of Salient Partners instructive:

..How big a part do TIPS (Treasury Inflation Protection Securities) play in your portfolios? Commodities? Other real assets? Many of these have been such abominable relative investment opportunities over the last 35 years that they frequently aren’t even considered as asset classes. In some generous cases they’re called alternatives or diversifiers, but few investors today consider them in the same context as stocks and bonds.

As the Inflation Narrative heats up, I believe asset allocators will have to seriously evaluate the extent to which this tacit assumption is still appropriate. They will have to grapple with whether nominal bonds have the same crisis risk aversion and diversification characteristics that they have over the last couple decades. But here’s the rub. They will have to do so in a prospective, long-term way that may not have the benefit of a recent high-confidence in-sample and out-of-sample period for their backtests. Are you ready to tell your committees that you think sovereign bonds may not be the same safe asset in certain types of major equity drawdowns? Are you ready to suggest what to do about that? Are you prepared to stake your career on it?

It’s not uncharted territory. There is nothing new under the sun, after all. But it’s territory that few of us have trod during our careers. And if you’re staring at the ground, trying to convince yourself that it’s solid before every step, you may be missing where we’re headed.

It’s still too early to state definitively that the recent bout of market volatility will morph into anything longer lasting or more perilous. But the precarious nature of the modern investment landscape surely warrants an approach less in keeping with the old 60/40 model of (largely benchmarked) equities and bonds, and more in keeping with an environment of elevated stock and bond markets and therefore more profound downside risk. Margin of safety in stock selection is useful on its own terms, but appropriate asset allocation will remain the single biggest determinant of future returns – or losses.

0 replies on “Margin of error”